1. I've been doing pretty well with the whole stay-at-home thing for the past month, other than the first full week of it which was a little rough, but after that I got back onto schedule and stayed organized and kept up with my routines, all of which are key for my well-being. I've pretty much accepted this new normal and it's actually been pretty good. But this past week was a harder week again. Maybe anger/anxiety/resentment about this whole situation is going to hit about every four weeks just to get the frustration of it out of my system for awhile.

I'm never alone anymore. Like, ever. Except for obvious things like the bathroom and if I'm driving somewhere alone. As an introvert I need alone time in which I'm truly alone, in my home, and I haven't had that for about five weeks now. I'm not complaining because I love my family and I'm thankful for them and I'm glad we're all safe and healthy together at home. And I get way more "alone time" than people who have young children and babies, or elderly or disabled family members to care for. It's just a big swing to go from the lifestyle I had to this new and (hopefully) temporary one. Most of the time I'm fine with it, but sometimes it gets to me, and this past week was one of those times.

2. One of the things I've been trying to deal with this week is the rage I feel for China, a rage that, along with the virus infection rate, has surged this week. Either directly or indirectly (I'm not sure which one yet), this is China's fault. They've pretty much destroyed the world, at least for the time being. The evidence is increasingly clear that this virus was man-made and that it originated from a lab in Wuhan. China has been trying hard ever since to cover it up. The virus could have been contained and it would have been much less destructive if China had handled it responsibly the way any good government would have, but instead they lied and they tried to control the situation and shape it to the narrative they wanted, which is what their corrupt Communist government does. I'm not angry at the Chinese people, who are victims of a truly evil and brutal government, but I'm enraged at Xi Jinping and the Communist party of China. I hope the world will bring them to justice for this. WWIII? I don't want it, but I could see it eventually happening over this.

What would justice look like? I've been thinking about that. How about exiling Xi for life, deposing the government, and requiring economic reparations for all the damage they've done to the world. When I hear and read heartbreaking stories in the news about all the innocent people this is affecting, how so many innocent lives are being painfully and suddenly ended or upended worldwide, I can't just sit there and peacefully accept it. I believe in the divine and eternal principle of justice. China must be held accountable for this, and I believe that sooner or later, they will be.

3. I'm going to try to lighten up a little now. But it did feel good and a little cathartic to pound that all out on the keyboard and vent my wrath! Yesterday I went shopping for the first time in two weeks, first to Stop & Shop (the grocery store) and then to Target. I wore a face mask out for the first time ever, since that's the recommendation in Massachusetts now. It felt weird to wear it, and it was a little hard to breathe in it, and I found myself reaching up to adjust it more than I would have liked, which ironically could make it more dangerous because I was touching my face when I otherwise wouldn't have been. But I got more used to it and hopefully I didn't have anything bad on my fingers when I adjusted it. 🤞 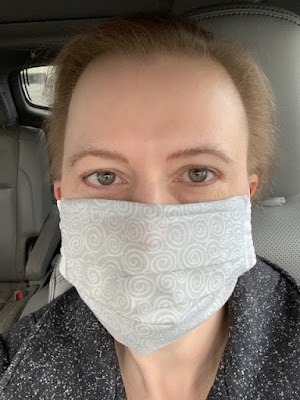 My shopping strategy is to go early in the morning on a weekday. I think it works pretty well. I was able to get most of the things on my list and there were no lines. Yeast continues to be impossible to find, but we have enough, although I'd like to have more. Stop & Shop was completely out of eggs but I was able to get them at Target. We're all set for toilet paper through the summer, by my estimate, but out of curiosity I still look to see if it's available. It's still so weird to see the empty shelves and aisles.

4. Our HelloFresh meal kits have been less than stellar lately. One of the meal kits this week had a bag of moldy green beans that I had to throw away. 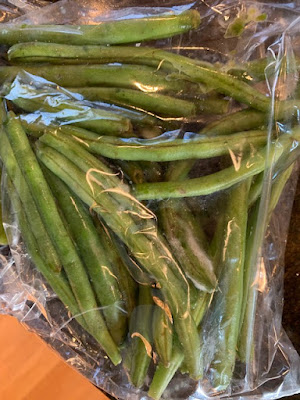 Thanks for that, China. (I successfully resisted the urge to insert the middle-finger-up emoji. Deep breaths. Success.)

I understand why HelloFresh (and so many other companies) are having a hard time right now delivering on their usual excellent quality and customer service. I'm grateful that the food boxes get here at all and that we're in a position where we can get them in the first place. We get two HelloFresh dinners a week most weeks, and most of the meals are really good. It's nice to have a food source other than the grocery store, take-out, or food storage. I do worry about the risk of infection, especially since the shipments come from New Jersey, a coronavirus hotspot, but I'm careful with the food and the packaging, and so far, so good. {Knock on wood.}

5. Through all of this, I'm so grateful to know that no matter what happens, because of the eternal perspective that I have and truly believe in, everything will turn out right in the end. There is nothing going on that Heavenly Father and Jesus Christ can't change if They choose to. I need to put my faith in Them and continue to follow Them. That perspective saves me from turning into a crazy angry person who goes nuts on the internet and dreams up elaborate scenarios for taking out the Chinese government. Turning to my Savior really does help save me from the weakest parts of myself.

Having a prophet is truly a comfort, especially in difficult times like the ones in which we're presently living. I love this photo of President Nelson from our modified General Conference two weeks ago. 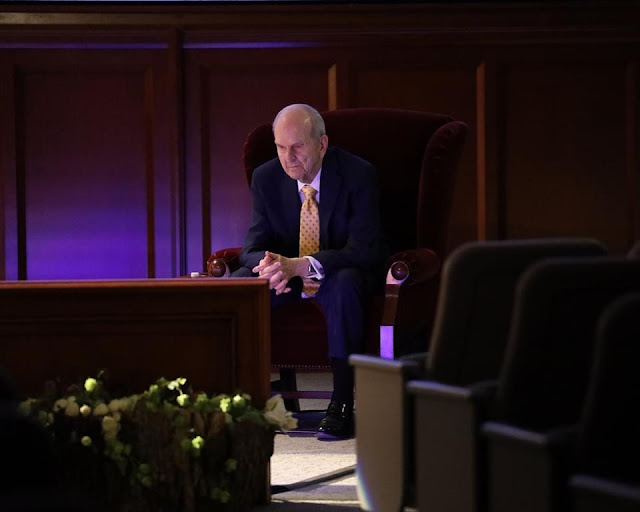 Something about this picture touches my heart. This is what a prophet truly is, with the weight of the world on his shoulders, seeing and knowing things we don't, loving and caring for people everywhere, and helping to light our path forward in the midst of difficulty. He's been preparing us for this, and he's preparing us for whatever is to come, if we will heed his wise words of counsel.
We thank thee O God for a prophet to guide us in these latter days!