This is what procrastination will get you! 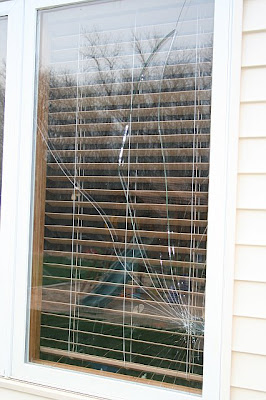 We had a storm door installed in our walk-out basement when we moved here, but the handyman who installed it didn't do a great job and the door never latched properly. It can get very windy in Iowa, so the door would fly open when it was really windy out. It's been doing that for over a year-and-a-half, plenty of time to get it fixed, but it was something we procrastinated on doing, thinking it was a nuisance but not too big of a deal and eventually we'd take care of it. But that proved to be flawed reasoning when last month a super-strong gust of wind made the storm door slam its handle into the window next to it, thereby shattering the window pane.

So last Friday our new handyman fixed the door, and on Tuesday a guy came out to replace the window, all totaling a cost of a few hundred dollars. We learned our lesson. Take care of things sooner rather than later or you might end up paying for it. Sometimes literally!
Posted by Donna at 9:08 AM