Tonight I was reading through The Wall Street Journal (the namesake for this blog and my favorite newspaper...there's so much more in it than strictly financial business news). Anyway, I came upon a little car review section for three-row SUVs, which I'm in the market for and have been scouting out for months. I think I may have found one that will beat my much desired Lexus (much to Peter's relief). It's the Toyota Highlander Hybrid. It made it into the review because it gets better-than-average fuel economy for its class. The brief description reads "Deceptively large inside, this seven-seater hides its spaciousness on the road."

I don't think I've seen any of these models on the road yet, but I do think I happened to see one at a Toyota dealership this week when I was driving by, and I thought to myself when I saw it, "Now that is a nice car that would be worth taking a look at." I'm already a Toyota fan, having driven a Camry for five years; their cars are well-made and pretty much problem-free, and they're more affordable than Toyota's luxury line of Lexus. I like the way this car looks. It has a cute butt, which is always of utmost importance when shopping for a car (I'm only half joking). I like cars with cute butts. My current Camry has a nice front but its derriere is too boxy-looking. Now that we're not poor newlyweds anymore, I refuse to get a car that I don't like the look of in the front, back, sides, and interior. It's just not worth it if you're going to be driving it around almost every day of your life for years. Life is short...get a car you like! An added bonus is that this is a hybrid, which is of course a good thing these days.

So in August or September, we will be car shopping and hopefully getting a new car. I'm still interested in a Lexus RX400h and a few others, but the 2008 Toyota Highlander Hybrid is now a top "contender." 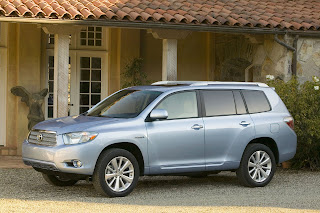 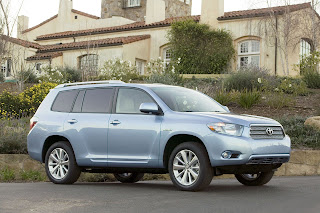 P.S. Feast your eyes on THIS: http://www.toyota.com/highlander/index.html. I'm not normally one to get all excited about cars, but I'm pretty excited now!
Posted by Donna at 11:53 PM