A Most Charming Ladies' Library

One of my favorite libraries is the Brewster Ladies' Library in Brewster, Massachusetts on Cape Cod. It's a lovely library and of course, a historic one. I like that it started out as a "ladies' library" and that it's still called that.

A short synopsis of its history from its website:


In 1852, when Brewster was flourishing with the wealth of homecoming sea captains and the vigor of many small businesses, the Brewster Ladies’ Library came into being.
Two young women, Sarah Augusta Mayo and Mary Louise Cobb, engaged in the ambitious project of interesting their friends in the town’s need for a library. They were so successful that twelve founding ladies established a subscription library in the home of Captain Mayo, at the site of the home now at 1772 Main Street. It opened to the public on January 29, 1853. (Men were allowed to borrow books, but they had to pay more than the ladies. That rule was dropped in time.)
From its early days, the library depended heavily on fund-raising projects to buy books and meet growing demands. When the bookshelf library became inadequate, Captain Joseph Nickerson contributed $1,000 to start a library building fund. In 1868, the quaint structure facing Main Street was erected. It contained two comfortable parlors lined with bookshelves, each with a fireplace.

I think it's really funny that men had to pay more than women to borrow books, but "that rule was dropped in time." 😄

Every summer this library has a huge book sale in their huge basement.
I've found some real treasure here over the years! 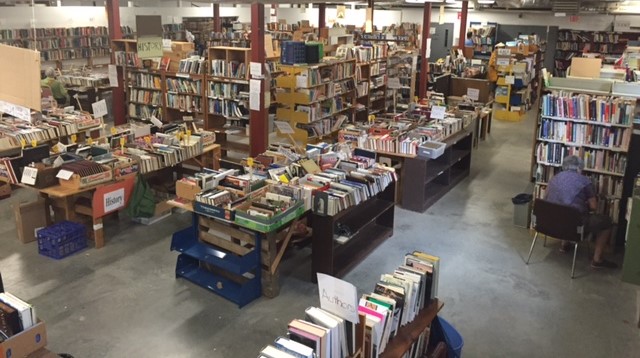 On a very rainy afternoon last summer (the same day that I mentioned here, here, and here, in fact), Sam and I went to the library. (John was at camp and we were waiting to pick him up.) 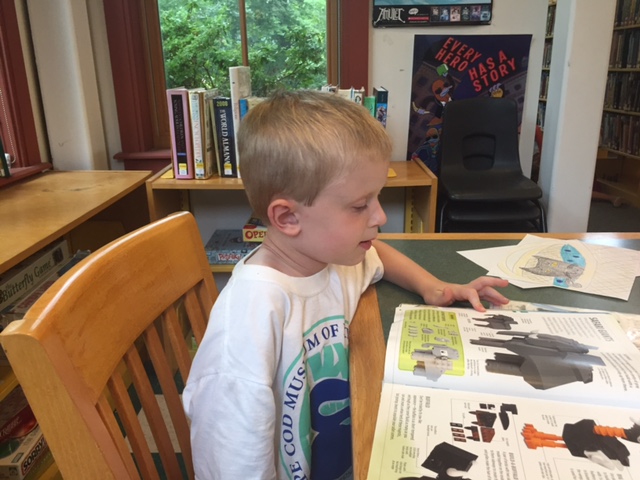 "May the books be with you." Yes, may they indeed! 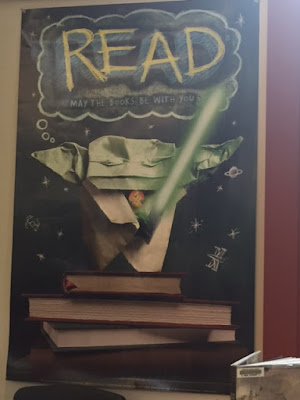 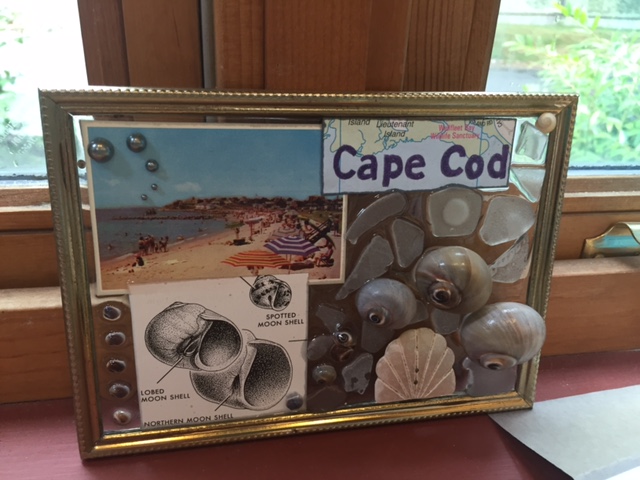 There was a nice display up about Beatrix Potter and Peter Rabbit.
I'll always have a soft spot in my heart for Peter Rabbit for this reason. 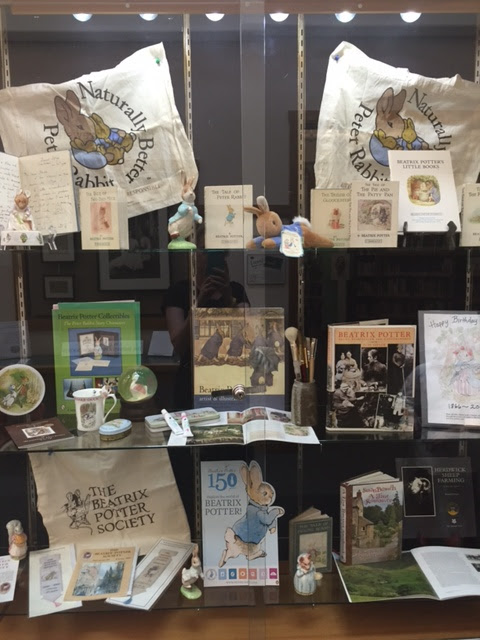 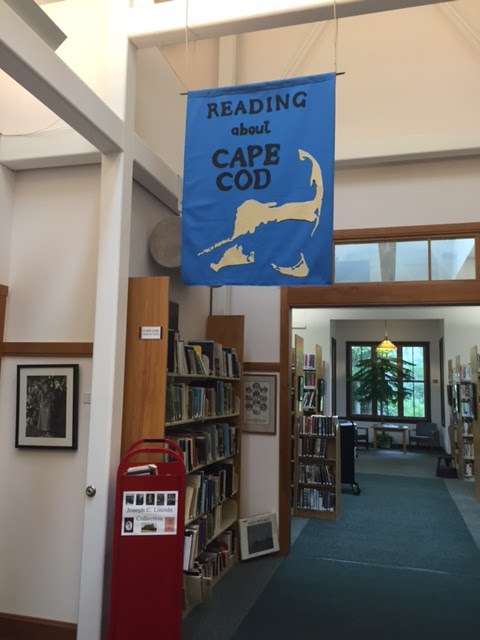 I love these beautiful literary stained-glass windows. I hadn't seen them before. 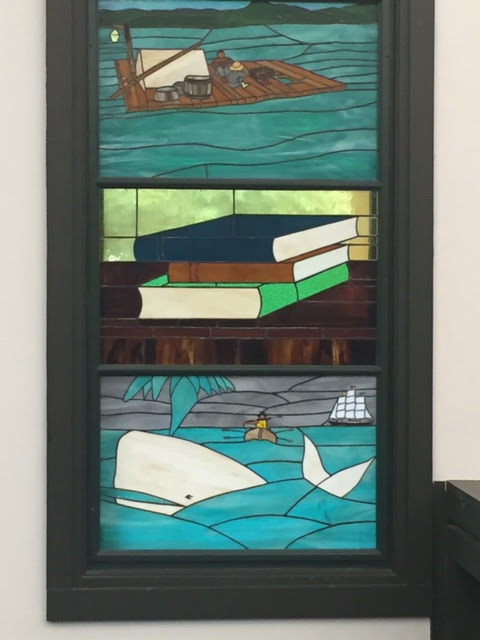 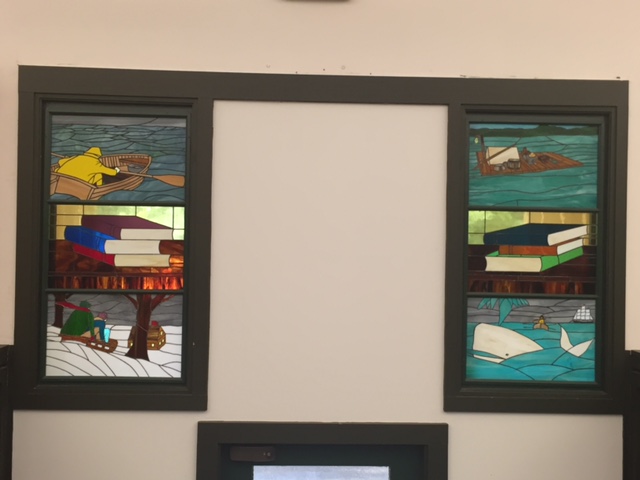 The back of the library. 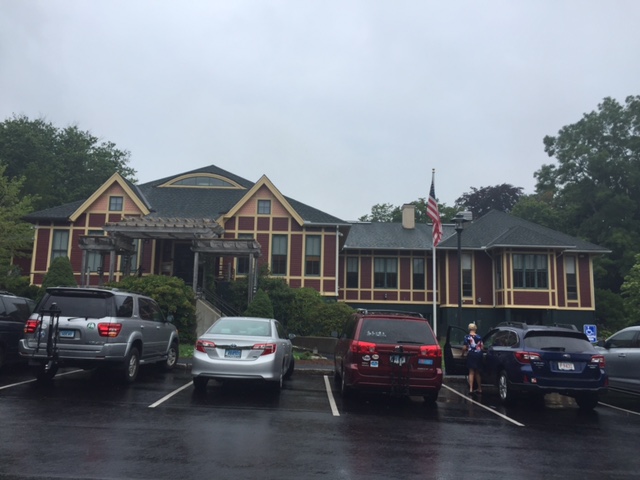 I've seen a number of authors reference this library as a place that was very helpful to them in their research for the stories they wrote that were set on the Cape.