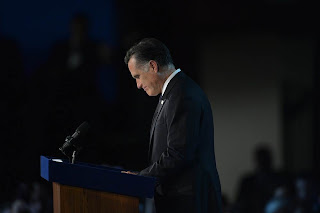 This was the title of a post I wrote four years ago when Mitt Romney lost the nomination to John McCain. I wish that the majority of Americans would see that Romney could really help this country more than just about anyone else. I am absolutely convinced of this.

Obviously, I'm disappointed by the results! I don't take much satisfaction from the fact that my instincts were right about Obama winning, but it does soften the blow. I'm surprised that it didn't turn out to be a closer race. Um, hello America? Do you see what's happened to our country and our economy over the last four years? Do you really want four more years of that? Apparently so. But I'm going to be cautiously optimistic and hope that President Obama takes these next four years to redeem himself. I'm not holding my breath on that, but maybe, just maybe things will turn around. I don't think Obama is a bad man with bad intentions (well, most of the time I don't think that). I just feel that he's not good at getting essential things done and at working across the aisle.

I believe that if this election had been held in 1980, Romney would have won easily. But it's thirty-two years later, and our country and our society are very different from what they were then. The U.S. is becoming increasingly liberal, worldly, dependent (on government, other countries, technology, etc.), and most frighteningly, society is getting further and further away from God and Christian principles. While there is much to be concerned about, I have faith that things will turn out as they should. This is still a great country and a great people. God is watching over us and He has a plan for us and for this world regardless of who the U.S. president is.

And to reiterate what I wrote about last week, the electoral college should be abolished! I know that Obama still would have won since he got the popular vote, but that's beside the point. The electoral college is a relic from the past and we don't need it anymore. Let's elect our president by the vote of the people, not the vote of a few states!

And that ends my thoughts on the election. Thanks for reading my two cents! I'm already looking forward to 2016! I must be crazy.