Oh, the price we sometimes pay for the animals we love. Two weeks ago, on Sunday, June 8th, I noticed that my cute little cat Brody who I love to play with was throwing up some liquidy stuff. On Monday, he was still doing it and he wasn't quite himself. By Tuesday I was pretty worried. He was still vomiting and he was just laying around, totally lethargic, and he seemed to be in pain when he walked (he couldn't really even run anymore). This was extremely unusual for normally active and mischievous little Brody. So I called the vet's office and they said I should bring him in that day, which I did, along with my little helper John.

The vet found that poor Brody's temperature was 104 and rising, and that he was extremely dehydrated. His X-ray didn't give much indication as to what the problem was. I had to leave him there overnight so that he could get IV fluids and some pain-relieving medication. Later that day when I was at home, something told me to go down into the basement. So I went down and there at the bottom of the stairs was a small piece of blue gift ribbon, all shredded at one end. I'd been down there earlier in the day but if it was there I didn't notice it. This was the probable answer to the mystery of what was wrong with Brody. Unbeknownst to me, he'd nabbed a curly blue gift ribbon that John had gotten around a little gift at his preschool ceremony on Friday, June 6th, and he'd eaten almost all of it. That's a potentially suicidal act when you're a cat.

I talked to the vet on the phone and told him what I thought it was, and so the next day, Wednesday, when Brody's condition still hadn't improved, he decided it was time to go in and do some surgery. Sure enough, there was the ribbon all bunched up and stuck in his small intestine. The poor cat! Fortunately the surgical procedure worked, and we were able to bring Brody home on Thursday evening.

He still wasn't himself for a few days, and his stomach was all shaved and stitched and very sore for him. It made me keep thinking about my C-section and how painful the recovery was from that in the first few days. Recovery from abdominal surgery is no fun for human or, apparently, feline. But after the first few days home he became much more like his usual self and seemed to be feeling a lot better. So he'll be fine, as long as he doesn't get into any more ribbons or things like that. We'll have to be very careful about that from now on!

The cost of this innocent little gift ribbon turned out to be a whopping $1,300. But a beloved little kitty cat who is alive and healthy again? Priceless.

Brody, post-surgery and home again, with his shaved and stitched-up tummy. 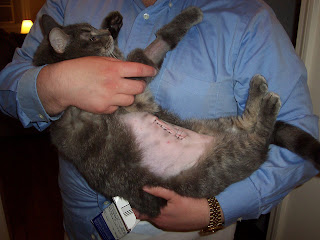 He has a funny little spot that was shaved on his leg for the IV fluids to enter. He looks like he's wearing a Michael Jackson or Madonna glove from the 80s. Ha ha! 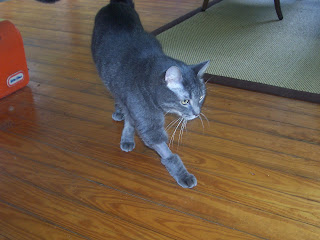 Resting in comfort and just about back to normal. (The little stinker!) 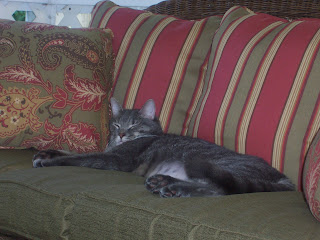