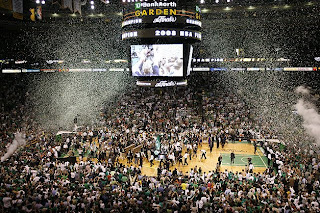 Last night was a thrill for native Bay Staters who have any interest at all in basketball and sports. The Boston Celtics won the NBA Finals for the first time since 1986 in thrilling fashion, beating the L.A. Lakers by 39 points in Game 6. The Celtics were once the powerhouse of professional basketball with sixteen championship victories, but since 1986 and up until just last season, when they only won 24 games, they had definitely lost their magic. For them to turn it around like they did and win 66 games this season and go on to win the Finals was amazing! It was the biggest turnaround in NBA history.

It was even better that they won it in Boston, not in Los Angeles. Boston fans are very good about supporting their teams, and when those teams win big, the fans know how to celebrate. Unfortunately, we haven't been able to celebrate in Mass. with our teams when our teams win because: 1) the Superbowl will never be played in New England unless the Patriots get a super-dome stadium there, and 2) the Red Sox have won their last two World Series away from home...maybe this year they'll do it at Fenway! That hasn't happened since around 1918. So the victory in Boston last night was awesome for many reasons.

I used to like watching the NBA Finals when I was in middle and high school. I haven't really been into it since then, until this year. I'm not a big basketball fan, but this was a good series to watch and last night's win brought tears to my eyes. Perhaps its partly genetic because my mother and her family all lived through the Celtics heyday in Massachusetts back in the 60s, 70s, and 80s, and I've grown up hearing about those glory days with Larry Bird & Co. I hope the glory days are back for the Celtics like they are for the Red Sox. I might just have to take up an interest in basketball again if they are. One more bonus is that the team's general manager, Danny Ainge, is a Mormon. Go Celtics! 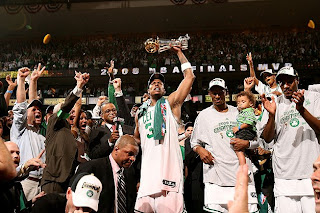