I noticed that I haven't been posting to my blog this month nearly as much as I did last month. I don't have as much to write about politically now that my heart's not in the presidential race anymore. Romney dropping out kind of took the wind out of my sails. Plus, I've been pretty busy this month. But there's so much I want to write about. If only there were more hours in the day! I also have some ideas to improve and update the look of my blog, but I'm afraid that I'll lose everything if I try to make them. Alas, The DSJ remains as it is for now...(that's one of my ideas; I'm thinking about changing my URL to thedsj.blogspot.com because it's shorter. Should I do it?).

I can't wait for spring and summer! Of course as I write this, there's a snowstorm happening right outside the window just a few feet away from me. I think about the return of warm weather (or at least mild weather) every day, usually many times a day. I know I sound like an old grumpy broken record, but the older I get, the less and less I like winter. It does, however, have a few redeeming qualities: classic, pretty New England snowfalls like today's, Christmas, ice-skating, and hot cocoa. I wish winter was only in December and January and that spring started sometime in February and went to April with summer then going from May to September. Now that would be nice!

Here are some pretty flower pics I took to tide myself over. I grew some pretty tulips in a glass vase in my kitchen for a few weeks, and my Valentine's Day roses ended up blooming beautifully and are still going pretty strong. What the experts say about the benefits of having real flowers in your home is true. I feel happy every time I see them! 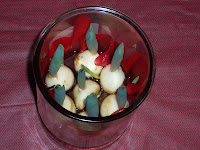 A few days later (they're a little longer) 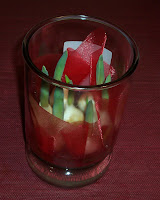 What happened!? They suddenly grew so fast and shot right up! (Okay, so I forgot to take an updated picture when the leaves sprouted before the tulips came out. But it really did happen before I knew it!) 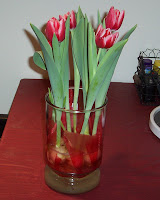 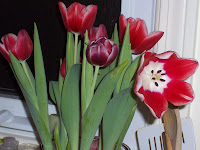 I get a little obsessed with blooming roses:

February 14th, when I received this bouquet from my special valentine. 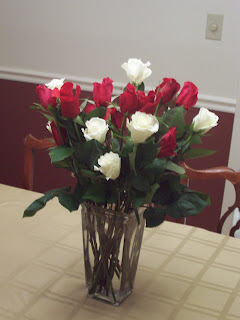 Here they are a few days later... 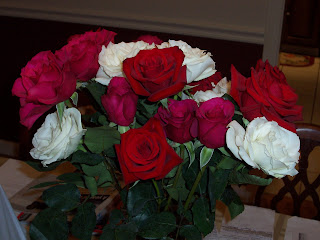 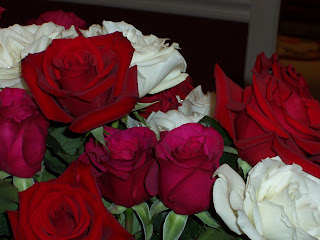 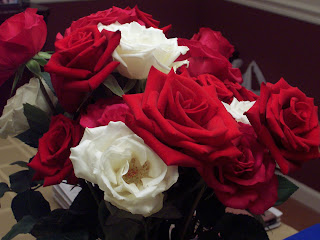 And even bigger a few days after that... 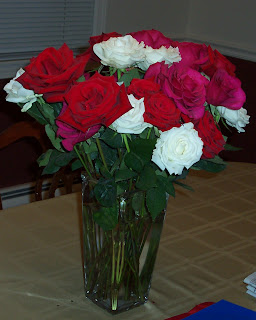 This was yesterday. They're in their full glory and starting to droop a bit now. I love them! 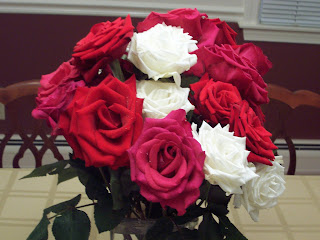