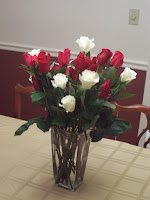 Happy Valentine's Day! It's a sweet little holiday that I would hate if I were single, but since I'm not, I enjoy it. I like the traditional things, so Peter got me a lovely bouquet of red and white roses and two dozen of my favorite homemade cake truffles from a local mom who runs her own business out of her home. (We've used her a few times in the past, and she and her desserts are wonderful! Check out her website: http://www.freewebs.com/katescakesconfections/).

Today itself hasn't been too exciting. It's hard to go out to dinner and other things whenever we want now that it's not just us anymore. It got me thinking about our Valentine's Day celebrations before we had John, and this brought up the memory of one of the sweetest things Peter has ever done for me...Valentine's Day in 2004 (conveniently it fell on a Saturday), when Peter really outdid himself and set the bar pretty high for all future V-Days. We'd been married for almost two years and I guess Peter was still pretty infatuated with me. (Ha ha!)

Here's what he did: He totally surprised me with an elaborate scavenger hunt he had planned. Usually I catch right on when he's planning something but this time I had no idea. That day in the local newspaper were love messages listed on the front page (the ones that people purchase to leave a little note for their beloved), and he left one for me that said "A Valentine's Message for: Donna J. Carlson. A special journey begins 2:00 pm at Lingerie by Susan, 9 Lincoln Highway, Edison." (We were living in Edison, NJ at the time.)

So I drove over to the lingerie shop (scandalous!), where he had bought me something that was wrapped up and waiting in a box. The next step in the hunt was in the box, written as a clever little poem. The women who worked at the shop were in awe that my husband had planned all this. So was I! I next had to go to the mall, specifically to Nordstrom, where there were a few boxes waiting in one of the dressing rooms. Peter had picked out and purchased for me a beautiful black velvet Ralph Lauren evening gown with a jacket to match it, as well as a seriously stylish pair of heels (I knew the salesgirl must have helped him!). I was a little shocked by this point. Next, I had to go to Littman Jewelers in the mall, where he had bought me a lovely heart-shaped diamond pendant necklace to wear with my new dress. To give an example of the little poems that came with each gift, this is what the one said that came with the necklace:

"So now your outfit is complete. I hope that you have enjoyed this little treat.
But your journey is not yet through, for another step awaits you.
Now you need to hurry you see, for we leave for the train by 3:30.
So off you go to the home you have chose, where I shall await you, with a beautiful rose."

How sweet is that!? I couldn't believe all the planning and coordination it took and that everything worked out so well. When I get home I quickly got ready in my new ensemble and we took the train into New York, where we enjoyed a very romantic and special Valentine's Day dinner at Tavern on the Green in Central Park. That's the first (and only) restaurant I've ever been to where there was a serenading violinist. I always thought that was so romantic in the movies and on TV (even though it's frequently used for comedic effect), and to have it actually happen was even better than I thought it would be. The violinist asked what he could play for us, and I requested I Can't Help Falling in Love with You, which was the first dance song from our wedding reception. It was very beautiful and special, and I'll never forget that. After dinner we went to a concert at Carnegie Hall where we relaxed and listened to symphonies by Beethoven (he's my favorite) and Tchaikovsky. It was such a perfect Valentine's Day and I absolutely couldn't believe that Peter did all of that for me. I still can't believe it when I think about it. What a lucky girl I was, and still am!

So you see, Peter has set the standard quite high for himself now. All subsequent Valentine's Days have been much, much more low-key, which is okay. (Example: Where were we the following year on V-Day? We ate a quick dinner at a local restaurant and then went to a baby-care class at the hospital, since John was due to arrive a few weeks later. When we got home we watched Everybody Loves Raymond. Doesn't quite compare with the previous year!) Valentine's Day 2004 will always stand out as one of the nicest, most generous things anyone has ever done for me. Thank you for the memories Peter, and for making me feel like royalty for a day. I love you!
Posted by Donna at 8:46 PM