I'm not a fan of when Halloween falls on a Sunday since Sunday is the Sabbath Day, and normally I'm pretty "strict" about honoring the Sabbath, but I do give Halloween a pass because I figure that it's a family and community event that is home and neighborhood-based and you don't go out and spend money or anything like that. I still don't really like it, but that's the peace that I've found with it. Fortunately it only happens about once every seven years.

Before I get to Halloween itself, the day before we went to our ward's Trunk or Treat party at the church, which the community was also invited to. It was going to be outside at an elementary school but it was rainy so it was moved inside to the church. I helped out with two booths, and the whole thing went well and it was fun.

My mom came to help with the boys and to pass out candy for me since I had to man my booths. My nephew Shane was there which was fun. He had a good time, and it was at church! Ha ha. 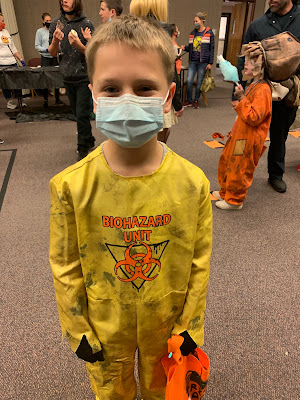 John, Isabel, and Conner dressed up as The Chipmunks. Cute!
John had stuffed a cupcake in his mouth before I took their picture. 😆 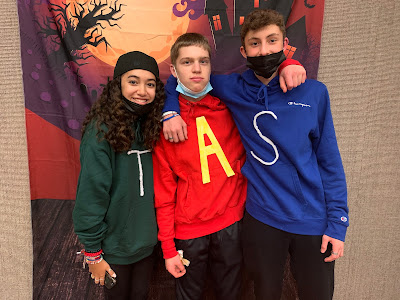 Sam is the one who did the "A" for John's hoodie. He's by far the best one in the family at crafty stuff like that.
It was cute how the colors of John's hoodie and Sam's french fries hat coordinated perfectly! 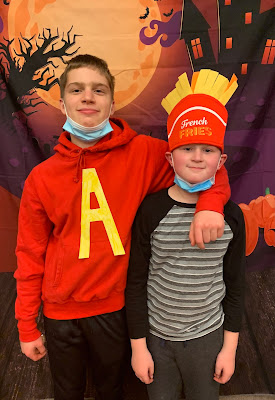 And Shane matched pretty well too! 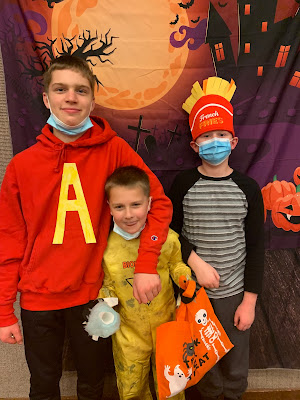 On Halloween itself, I made a new "recipe" of witch's broomsticks--mini Reese's Peanut Butter cups with pretzel sticks stuck in them. Nice and easy. And yummy! 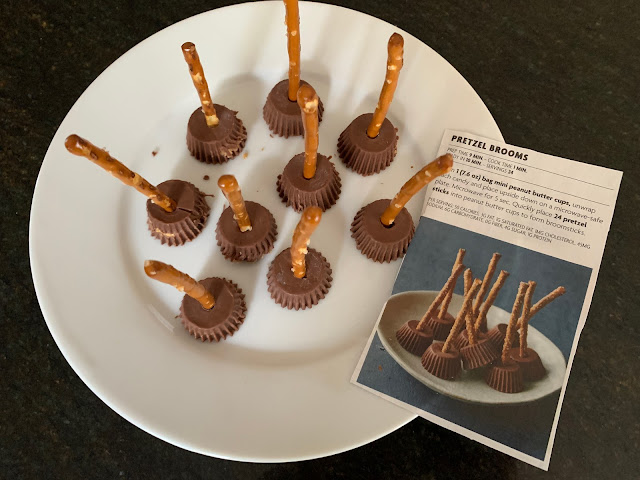 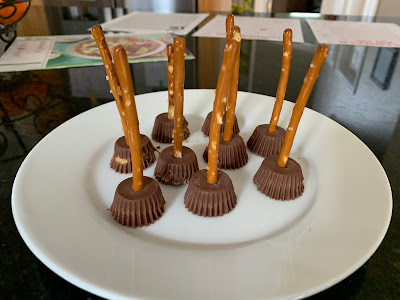 Sam continued with the food costume theme that he's had going for the last several years. He was a burger and fries because they are two of his favorite foods. He's been a taco, hot dog, and how a hamburger. We'll see what fine delicacy next Halloween brings! 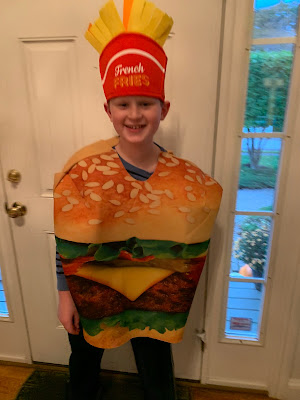 I like this picture because he used to make this face when he was a baby, so it reminds me of his cute baby days. 👶💙 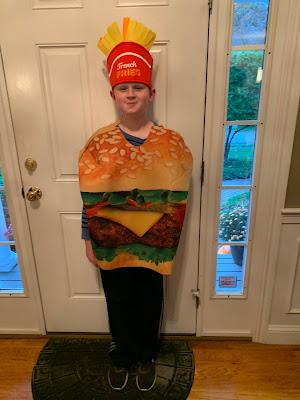 Rocco was a plague doctor--the perfect costume for the Covid era! 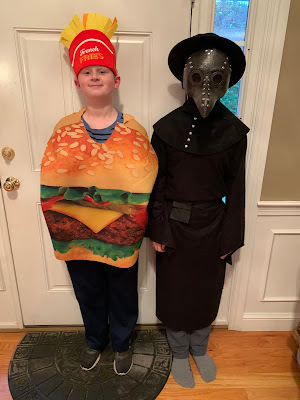 I posted this picture on Facebook and captioned it with something like "A burger, a biohazard guy, and a plague doctor walk into a bar..." I know, I'm hilarious. 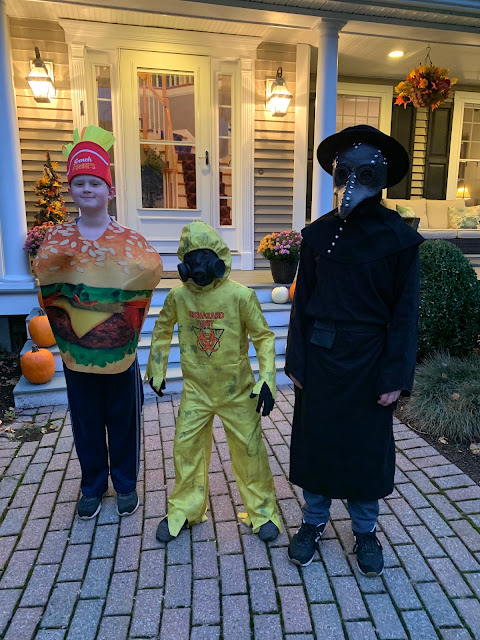 Sam's friend Alex came over and went trick-or-treating with him again this year. Elizabeth took them and Shane around (Rocco went with his own group of friends and John doesn't go anymore). I stayed home and gave out candy to trick-or-treaters, which is always my preference.
The boys all brought home a hefty haul of junk candy. We live in a good neighborhood for trick-or-treating! 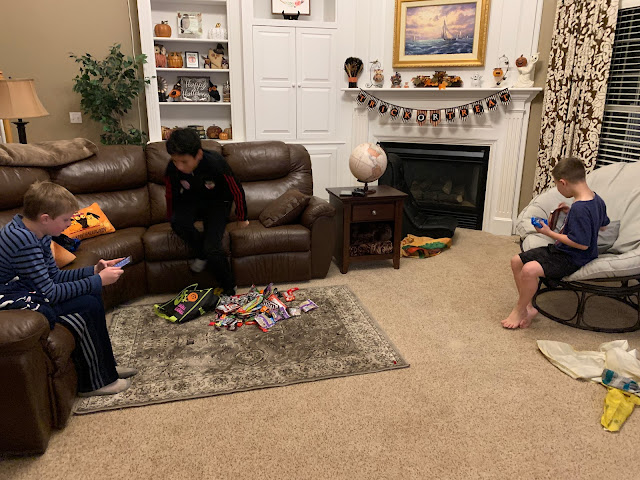 Shane didn't hesitate to get started on his stash! 😋 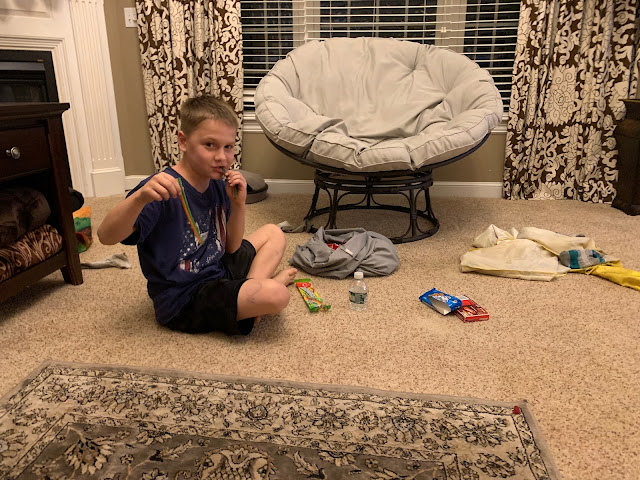 Roblox had been out for a few days and so the real treat on Halloween was that it had come back online when the boys got home and they got to play it again. They were more excited about that than the candy! 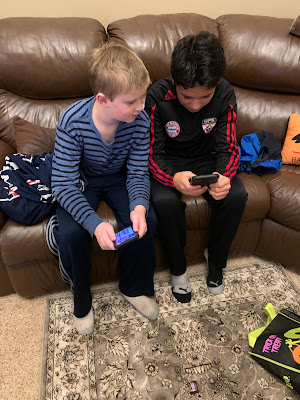 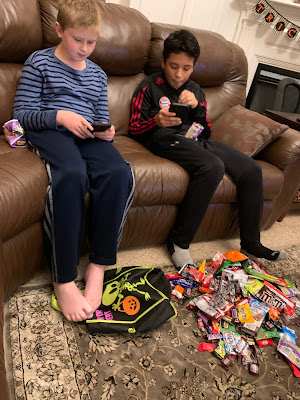