April started off on the right foot with an extra-special weekend of both General Conference and Easter! 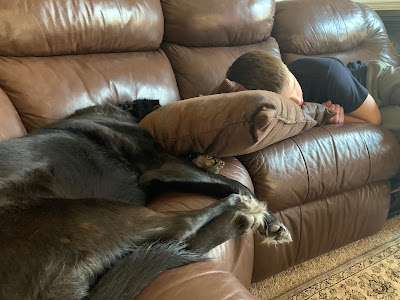 The three of us during the Saturday morning session. 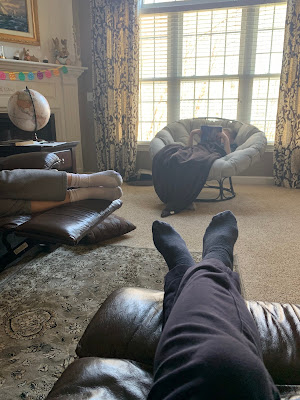 I haven't mentioned it directly on the blog here yet, and I might as well get it over with now after a seven-week break from blogging due to the craziness of life...it's "the three of us" now (and has been for awhile) because Peter has officially "left the building" (our home), entirely of his own accord, so it's just the boys and I here now. He and I are getting divorced. It's tragic and it's not what I wanted at all, but at this point, it's gotten bad enough that it is what I want. I don't even recognize who he is anymore. I'm looking forward to rebuilding my life as a single mother and focusing on the boys and myself and our healing and growth. We will be fine. We ARE fine. So that's my big news. Now, back to the regularly scheduled programming... 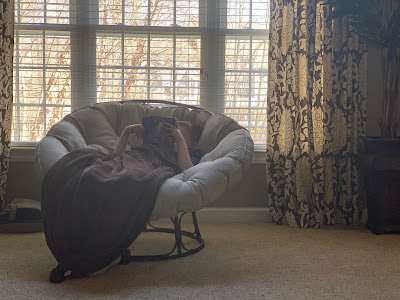 I've decided to be more relaxed about General Conference with the boys. I think it's more important than ever during these hard times to make Conference and the guidance it provides a high priority, but I also want to be flexible and not make it something they dread. So I did something new this time and it worked well. They had to watch the Saturday morning session, but they could do other quiet things (like read or draw...or nap), unless President Nelson was speaking. For the Saturday afternoon session I let them decide if they wanted to watch or not. They had to watch the Priesthood session that evening (which turns out to have been the last one possibly ever). And they have to watch the two Sunday sessions but they can do quiet things during them too (things that don't involve their phones or other devices, although I did end up allowing them to use their devices during the afternoon session as long as they weren't using headphones or anything). They have to watch (completely) whenever the prophet speaks. I'll probably tweak it more in the future, but I think it worked well overall. I like that it helped me to not be a nitpicky micromanager, and it gave them more freedom and choice. The spirit of peace was there much more than the spirit of contention. Victory! 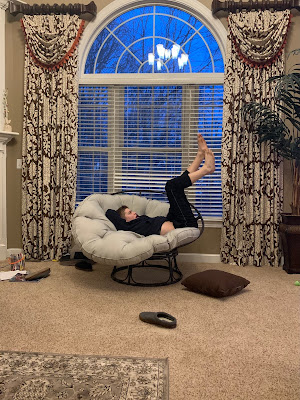 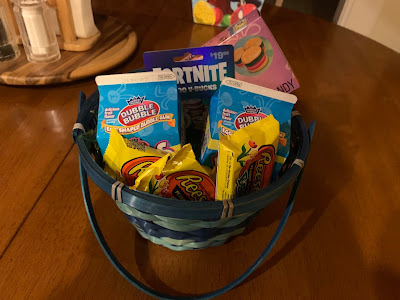 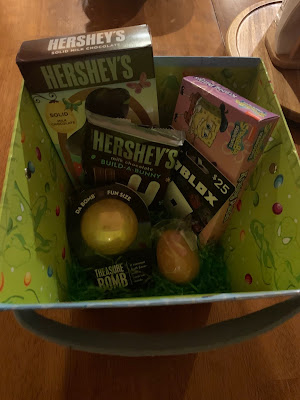 The boys did their traditional Easter egg hunt around the house on Sunday morning. And we made Resurrection rolls and watched "The Testaments" (which always makes me cry). 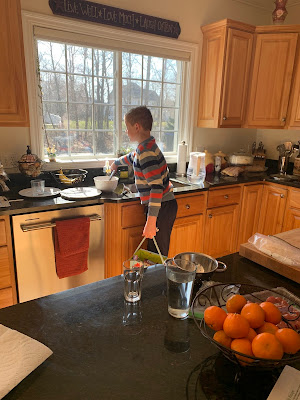 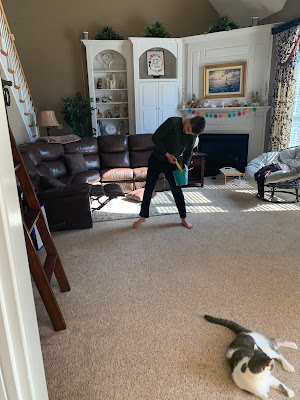 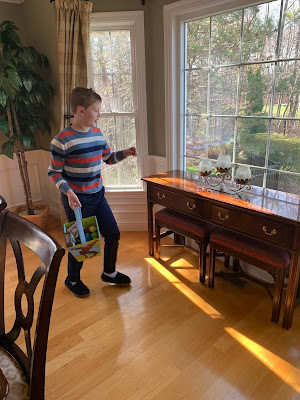 Someone anonymously left this lovely flower bouquet and handwritten card and tomb on the front porch that morning. It was such a nice surprise. People are so kind and thoughtful! 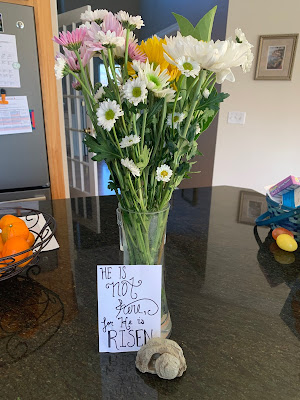 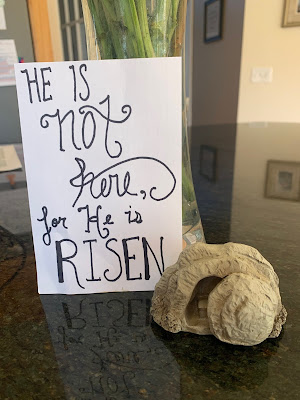 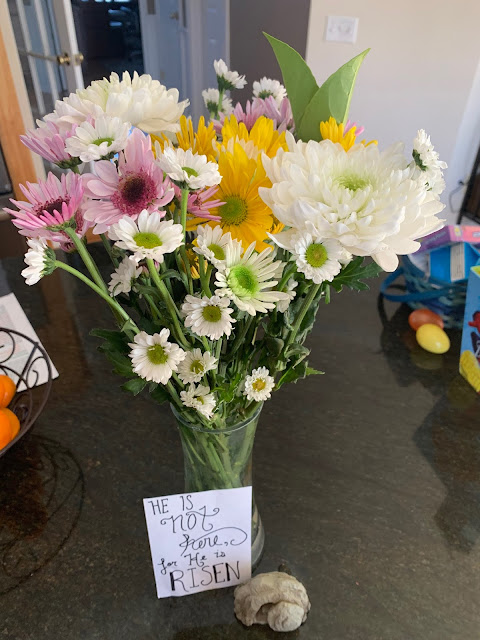 I put together a nice Easter basket for myself too, because I don't have anyone else to do that for me now, and I deserve it! The teddy bear is one of those lavender aromatherapy ones that you can heat up and cuddle with. It reminds me of a lavender-colored teddy bear that my favorite Primary teacher gave to me when I was little. 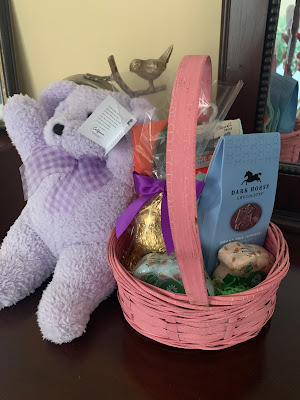 I hosted Easter dinner for my family, but I didn't have to do hardly any of the cooking! That's my favorite way to host! The meal was delicious (because I didn't cook it! 😂). 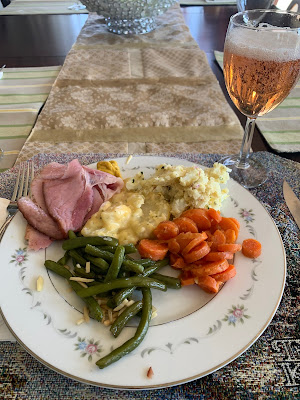 There were more than five of us, but the kids sat at the kitchen table. Actually, now that I think about it I'm pretty sure they ate outside, while we adults enjoyed the elegance of the dining room. 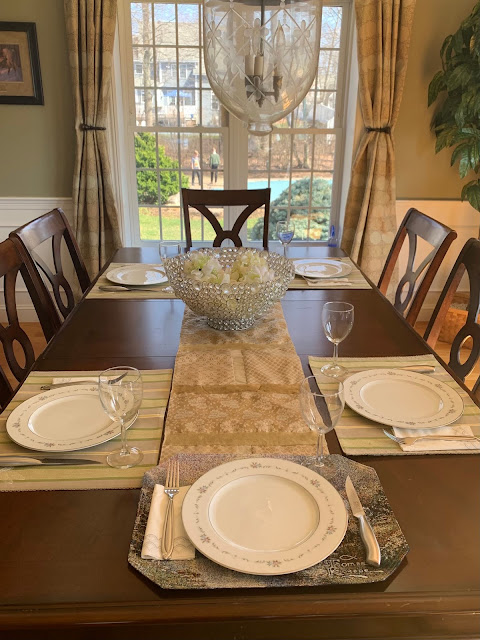 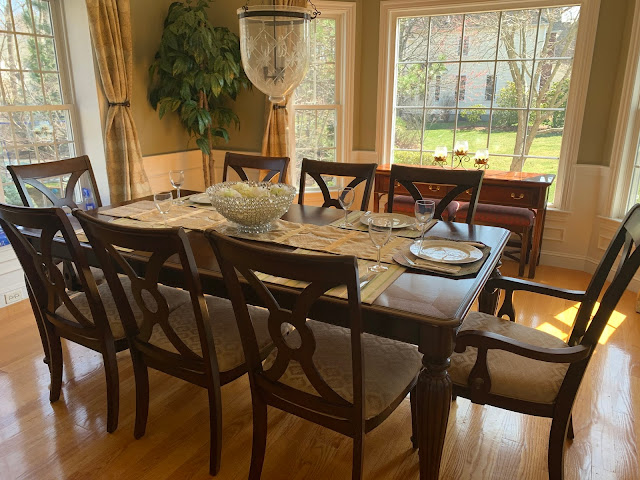 It was a really nice weekend, and it was a much-needed spiritual respite that provided inspiration, motivation, and guidance for the tough times in our lives right now, both in our personal lives and in the world at large.
I love my Savior and His gospel more than anything, and I've grown so much through my trials because of them. I'm very thankful for the eternal perspective that I have--it makes a huge difference in everything.
Posted by Donna at 12:48 PM