If Ye Are Prepared...

Well, coronavirus has totally blown up over the last few days. Even a moderate but devoted prepper like me is surprised by how fast things have escalated. The boys have been out of school since Wednesday, and I don't know how long that will continue for, but it's looking like it could be awhile. Church and church activities are cancelled for the foreseeable future. Same for John's wrestling club practices, his wrestling banquet that was supposed to be tomorrow, his school concerts that were coming up, and it seems that whatever else is still left on the calendar for our activities and events has a good chance of being crossed out soon as well. Travel has been banned for Peter's work and he'll be working from home until at least April 15th. (Finally! This has been what I've been wanting ever since he went into consulting! Albeit not under these circumstances.) Life as we know it has changed almost instantaneously. 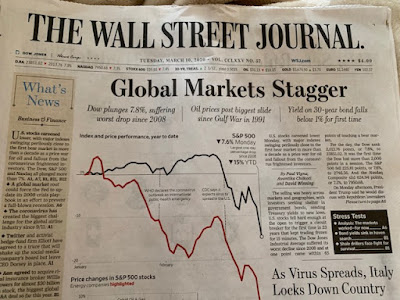 I've had a feeling for a few weeks that this virus was going to be bad in the United States. I stayed pretty quiet about it because most of those around me didn't seem to think much of it. Just last week I was with friends who thought the media was hyping it too much, whereas I'd been wishing that they'd started "hyping" it weeks ago. Just this past Sunday, my own father, who's an even bigger (and crazier) prepper than I am, said he wasn't concerned about the virus and that it wouldn't impact his travel plans next month. I was so surprised by this. I wonder if his over-confidence about his good health and fitness has blinded him to the dangers of what's really going on. Peter's parents had the same skeptical attitude that day too. This is the age group that should be the most concerned about this virus! Some of my friends on Facebook had been making fun of the whole thing and of people who were concerned. So I have to say that I'm feeling a little vindicated.

I'm also feeling a little..."triumphant" isn't the right word, because this whole thing has me concerned and sad, but I do feel glad and thankful that emergency preparation has been a part of my life for the past several years. The time and effort have been worth it. I'm mentally and physically ready for this. Instead of fear, I feel calm. For years I've been regularly reading non-mainstream news sources that have helped me to be mentally prepared for all kinds of SHTF (sorry for the swear word in that acronym) scenarios, and specifically I've been thinking about a pandemic happening since January. My mindset is primed for an emergency like this. And just as importantly, I believe we have all of the supplies we need to get us through if things get really bad.

But I need to be careful to not let pride and an "I told you so" attitude go to my head. There's still a lot I don't know. I'm not right about everything. Even though we're prepared, things could still get hard for me and my family. One of us or all of us could even get this coronavirus. I have to be humble and let the Spirit take the lead and stay worthy of its companionship. It's such a blessing and a comfort. Everything that President Nelson has counseled us to do over the last two years has been leading to this, preparing us for this, and for more to come, if we'd only listen and obey. I'm so glad that I have done the things that he's counseled. I'm far from perfect and I still make a lot of mistakes, but I'm living at a much higher level of personal righteousness and spirituality than I was in the past. There are prophets in the land again--there have been for about 200 years now--and we'd all be wise to heed what they say. I hope this pandemic will cause more people to turn to Jesus Christ and follow Him. Perhaps that is one of the only good purposes of it, and maybe it will be one of the benefits.

As someone who believes what the scriptures say, particularly regarding the signs of the times and "secret combinations," I have a conspiracy theorist streak in me. I try not to get too carried away with it but I also try to have an open mind about who might be responsible for things like this virus and why. For example, I think it's likely that this virus was created in a lab in Wuhan, China and that it was either purposely or accidentally released. If it was purposeful, is this whole thing a cover-up for something else that's going on? Or is it part of a bigger plan? Why now? The timing of it is intriguing to me, after impeachment failed to take Trump out and before that the failure of the other investigations. These are things I don't obsess about but wonder about. There could be nothing to them. But there could be something to them. In the end, it probably doesn't matter very much. In any case, I had a feeling that 2020 was going to be a wild ride and that it would be the start of big things to come. 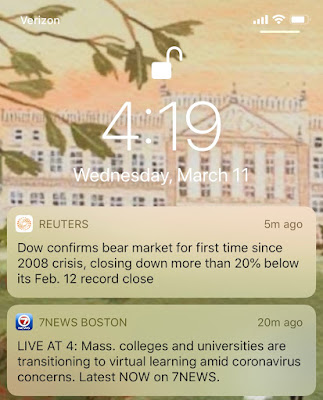 But ENOUGH of all that for now! Now that I've outed myself as a prepper and a part-time conspiracy theorist 😁, I want to share some advice and resources.

First, last Monday on March 2nd when I went to Target, the only things in short or no supply were travel-sized bottles of hand sanitizer and bottles of bleach. There were still tons of disinfecting wipes and pretty much everything else I was shopping for. When I went on a big shopping trip yesterday to Target and the grocery store, it was a different ballgame. There were a lot more things that were completely sold out. I was still able to get pretty much everything I wanted to get except for a bag of gel soap handwash refill, because I'd been stocking up on things for the last few weeks.

"Due to high demand...we will be limiting the quantities of disinfectant wipes, hand sanitizers and hand & face wipes to 6 per guest." No can do anymore because they're all gone! 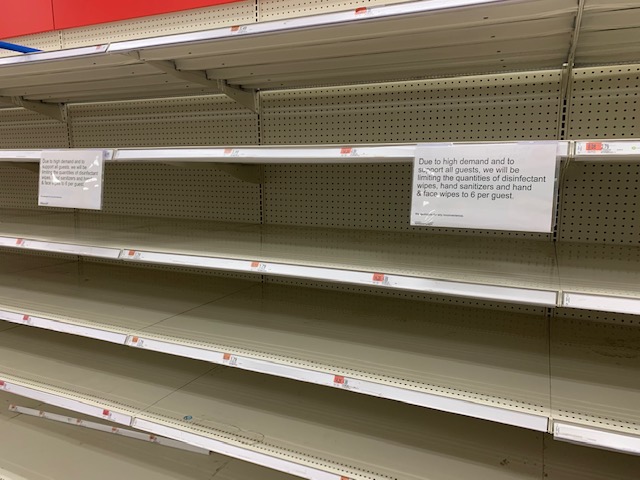 This was where I was out of luck getting a bag of handsoap refill. We have plenty of soap but it was on my regular shopping list (and it's probably going to remain there for awhile). I was able to get everything I wanted at the grocery store except for organic ground beef, which was sold out. 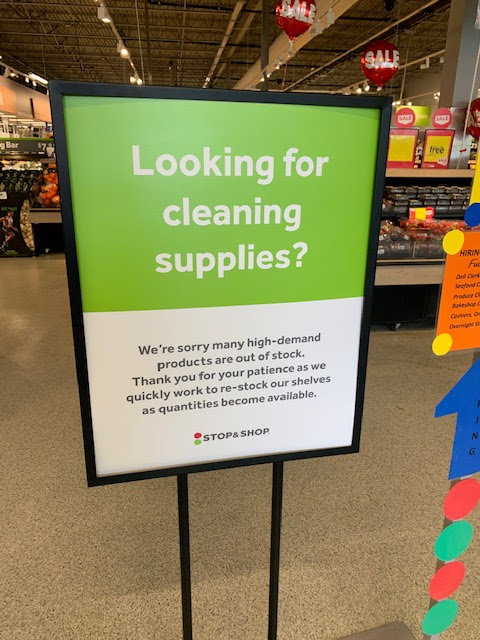 I've long had a habit of buying two or three extra of whatever I'm shopping for, for efficiency's sake and because that's what preppers do. Over the last few weeks I've stepped that up even more. And now I shop for things sooner than I did in the past, instead of waiting. Instead of going to Target every other week I'm now going every week. I will continue to do this as much as I can in the weeks to come, assuming that it will be safe enough to go out and shop!

I'm currently in the middle of my monthly 10-day Facebook Fast. It's hard! I want to be on there reading about what's going on with everyone. It's useful information, particularly for the community. But I'm also glad that I'm not on it right now because I'm pretty sure I'd be totally drawn in and would be spending far too much time and energy on there. Instead, I'm reading directly from my news sources, and watching the news, and turning it all off regularly. I don't need or want the distraction of Facebook right now. When I go back on it again in the middle of next week, I'm going to try to be disciplined about how and when I use it so that I don't get sucked into its addictive black hole.

More advice that I've been thinking about: It's not too late to jump on the prepping bandwagon. Prepare for the future now (we could have a serious recession or economic depression coming). Stick with your regular routines as much as you can. Stay organized. Keep your house clean. Take good care of yourself in body, mind, and spirit. Steer clear of unhealthy addictions or habits. Love your family. Help others and reach out to them. As corny as it sounds, don't sweat the small stuff. 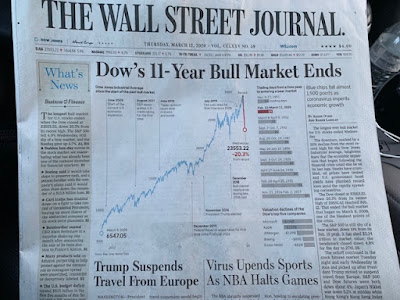 These are some non-mainstream media sources that have been part of my prep reading for years. Many of them were spot-on back in January about this virus and the devastating effects it would have here in the U.S.

theorganicprepper.com (I really like Daisy Luther, the woman who started this site and who writes a lot of the articles on it. I'm in touch with her on Facebook and we've even exchanged e-mails in the past. This is from one of her articles yesterday.)

You can sign up for her newsletter, which I highly recommend doing. Some of the people who comment on the articles are nutty but a lot of them are smart and have really good advice and information that has helped me a lot over the years.

This is a list of some of the other websites that I use for news (and speculation). Not everything that they say is true or good, but I sift through and learn what I can, using my own filters and intelligence and common sense to think through things for myself with the information given:

preppersdailynews.com (also done by Daisy from above)

zerohedge.com (ignore all the advertising, and some of the articles seem sensationalistic, but they were on to all of this a lot sooner than most of the other news sources, and they did not waver)

And of course, my favorite, The Wall Street Journal. Here is today's paper. 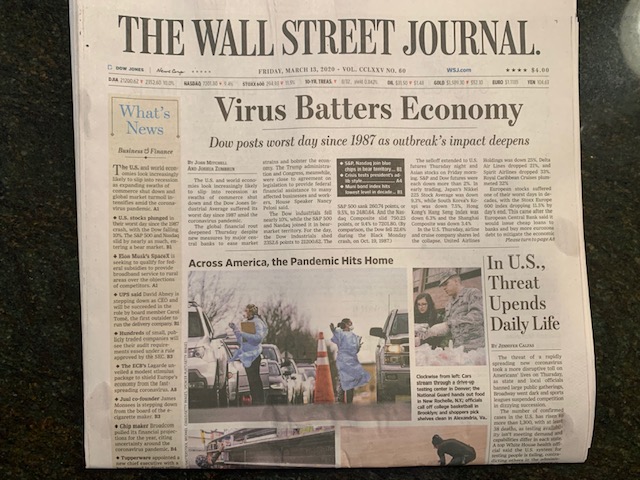 There are noticeable gaps in my preparations that I will work on once this all blows over. Weirdly, three of them start with the letter "g." (This paragraph is brought to you by the letter G!)
I wish I had a vegetable garden. It's on my to-do list for spring of next year, but I wish I'd already done this.
I wish we had a generator. That's also been on my to-do list for years.
I have a gun but I wish I knew how to use it better. I'm signed up for a class to do just that at the end of the month, but it may get cancelled. I should have been going to a firing range more regularly to practice. I will change that going forward.
The last thing is I wish I were better educated in homeopathy. I have books about it and have been learning things on my own, but I've been wanting to take a class and get trained in it and learn a lot more. It's such a good skill to have, especially if you're suspicious about certain aspects of the pharmaceutical and medical industries.

As time goes on, if the poop really does hit the oscillating device pretty hard, I'm sure I'll find other gaps and areas in which I need to be better prepared. I'm still hopeful that things won't be too bad though. "Hope for the best and prepare for the worst" goes through my mind a lot.

Programming note: I'm going to stick to my regularly scheduled programming. For the next two weeks I plan on doing blog posts about last October. My catch-up plan is still on track! Life goes on (knock on wood!).