Last June I got two tattoos right above my eyes. 😲
Permanent makeup tattoos, that is, in the form of microbladed eyebrows. 🤨

I'd been thinking about getting microblading done on my eyebrows for awhile. I have thin, sparse brows that I'd fill in and shape with brow gel, and I was looking to simplify and streamline my beauty routine. And I thought it would be great to have "naturally" defined brows that I didn't have to do anything with. So I did my research and found a good place nearby that did it, and there I went on a sunny Saturday afternoon to finally give microblading a try!

Getting it done was not comfortable. I did not enjoy the process. I enjoyed the immediate results even less. My research hadn't been thorough enough and I didn't realize how dark my brows would be right after getting this done! For the first week I was horrified because my brows were comically big and dark. This is a normal part of the process, but it's a very awkward part of the process! After a couple of weeks as the color faded to the intended hue, the horror turned to a somewhat wary contentment, and then to real happiness with the results. And now, seven months later, I'm still very happy with how they look.

I took selfies to document how things went. They're funny and embarrassing and not very flattering, but I'm willing to take a few hits to my pride in order to educate the public, and to give my loyal readers a laugh.
Let the hilarity ensue!

This was in the car right after I got it done. I was experiencing immediate buyer's remorse. 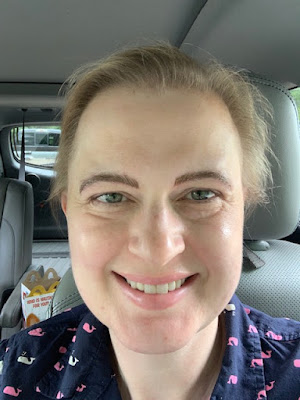 I don't think this picture does justice to how dark they really were. When I got home and the boys and Peter saw me, they all stopped short at the sight of me. 😂 I wore sunglasses for the rest of the day when I had to go out in public (even in the grocery store!). 😎

I stayed home from church because my brows were too dark to be seen in public and I genuinely thought that I would scare the nursery kids with them. I looked like a clown! I wasn't going to put those innocent children through that or endure the public humiliation of letting people who I see every week see my looking like that. In a panic, I ordered a bunch of different types of band-aids on amazon, thinking that maybe I could cover them up that week while they healed. This was ridiculous of me because twin Band-aids above my eyes would have looked just as silly (if not more so) than my overly dark eyebrows. Plus they wouldn't have stuck, and even if they had stuck, it could have affected the healing and coloring of the brows.
So now we're all set for Band-aids for a long time. 😆 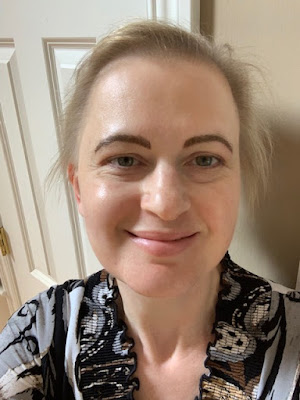 How I felt about how they looked: 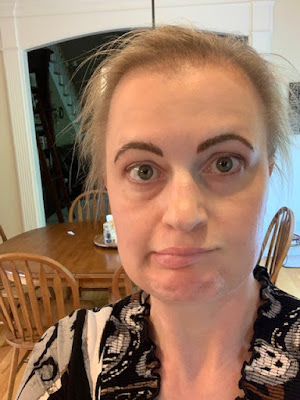 Still too dark for my fair skin and fair hair. They were flaking and healing and starting to lighten the tiniest bit, but I was worried for my future (for real!), and I was definitely wishing that I hadn't gotten this done. 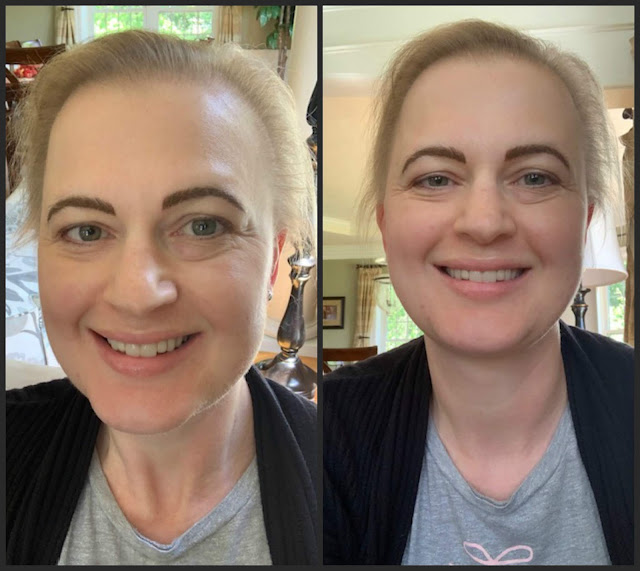 Still too dark. I had to face someone from the public (literally, ha ha) when a guy came over to give me a quote about removing some fallen trees in the yard. I tried to wear my sunglasses for as long as I could but it just wasn't practical and when I took them off he looked at my eyebrows right away. 😂 It was so embarrassing! 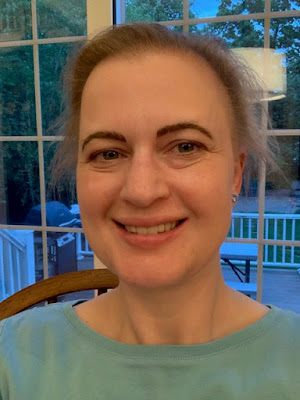 On Day 5 I skipped the end of year cookout dinner/Pack Meeting for Cub Scouts because they were still too dark. On Day 6, I had the unfortunate timing of having to host book club at my house. There was no getting out of that! I just had to face it (hee hee) and do it. By that time they looked a little better but they were still noticeably quite dark. But I held my head high (not really) and just did the best I could, and nobody said anything. I think by that point it just looked like I'd put a little too much makeup on them. 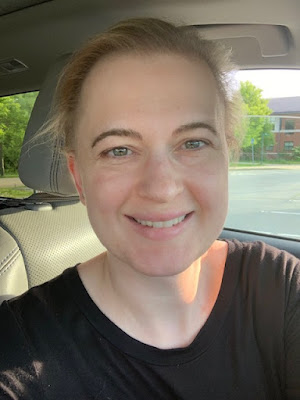 The one-week anniversary! We were definitely in a better place than we'd been the week before! 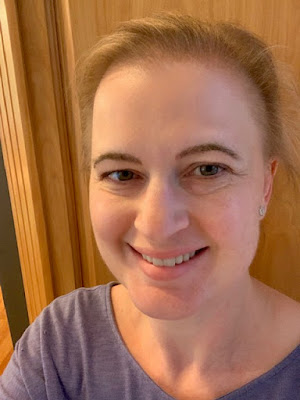 I went to church and the children were not scared! 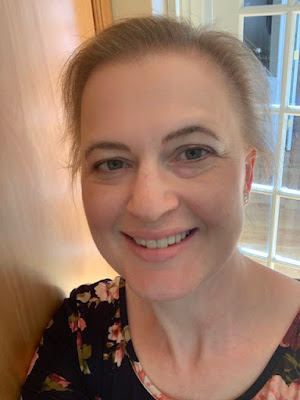 Things were definitely looking up and I was much more comfortable with them now. I think they defined my face pretty nicely and I liked how they'd been shaped. 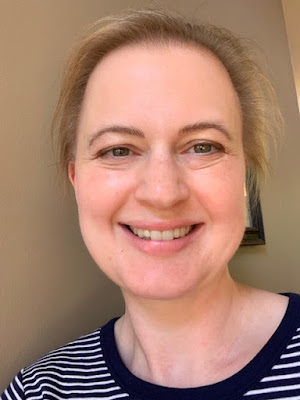 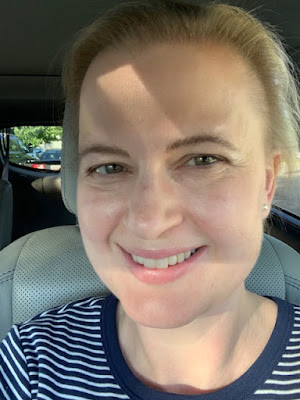 I was able to go to Sam's piano recital without shame! 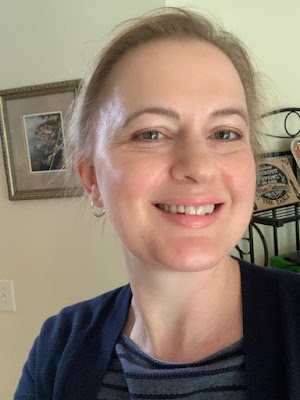 After getting a facial. (This is how I look with no makeup!) My facialist thought they looked beautiful. 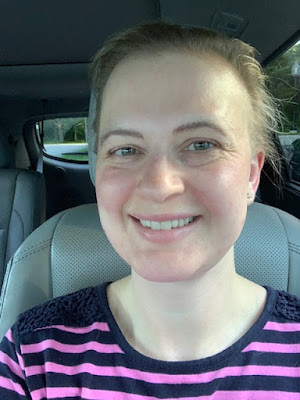 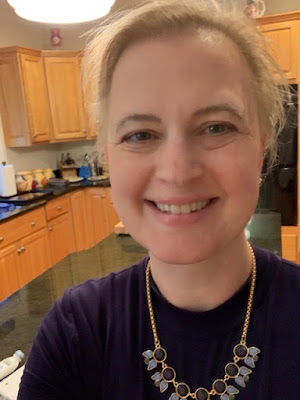 About three weeks after I'd gotten it done, I had to return for a touch-up. The touch-up was more painful than the first time. Ouch, it hurt! But they were looking good!

This is how they looked two months after getting microblading done. My hair had lightened up from the summer sun which I had worried would make my darker eyebrows stand out more, but I think they looked good! 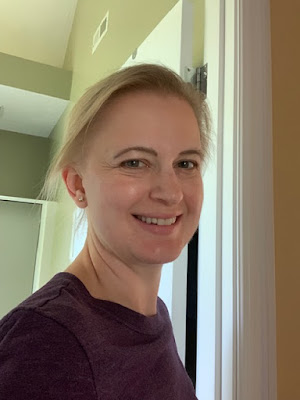 The picture above is how they look now, about seven months after first getting it done.

All in all, I'm glad that I got microblading done. The color should last for a few years and then I can get it touched up again, or re-done entirely if I choose. I really like not having to bother with my brows anymore. So I would get this done again, but I'm hoping they'll come up with a less painful way of doing it. The pain wasn't THAT bad (I don't have the highest pain tolerance), but it was definitely uncomfortable. (How do so many people get real tattoos?? Ouch!)

I recommend microblading as long as you're a good candidate for it and you find a reputable place and get it done by someone who is experienced with it. Make sure you approve of the shape beforehand and pick the right color for you. If I could go back and change anything, I would have gotten it done in the winter when I could hibernate for a full week and not have to leave my house except to drive the kids around.

I hope you enjoyed that harrowing journey as much as I did(n't). 😜