1. All in the course of one week, literally one week, the following things happened:

The refrigerator's broken freezer door was fixed and the loose and torn rubber gasket around one of the fridge doors was replaced.

The master bathroom light and fan over the shower suddenly stopped working and was replaced (it was old, and the new one is so much brighter and quieter--I love it, except for the hole in the ceiling next to it because the new fan/light is a different size than the old one, so I have to call a handyman to come patch the ceiling. But there is light over the shower once again--brilliant, beautiful light!).

The pump for the basement bathroom suddenly stopped working, so the bathroom was unusable and stinky. We got the pump got replaced on Halloween.

The brake lights on my car went out and I didn't know it until a police officer kindly let me know, so I went and got those replaced that same day.

The power went out for a little while due to a wind storm on Halloween night.

All of this within one week!

It's so weird when things like that happen. I like to think of it as the house, or life or whatever, getting it all out of its system and then it will be good for awhile. A long while! Although my newest and currently only (knock on wood) dilemma is that the battery in my car key is low, and I have no idea how to replace it. I tried. I think I might have to call the dealership and get a new one. These modern cars!!

2. I bought this pretty shirt from Talbot's this past week. They're killing it with their flowered shirts! I had a $20 off coupon so it only cost $20, plus shipping. It will be a nice shirt for spring. 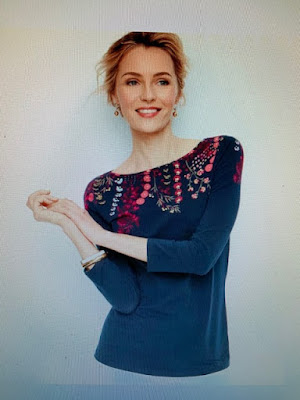 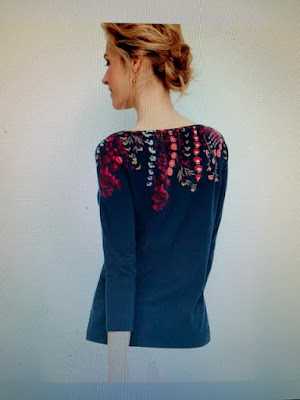 This lady has my dream hair, by the way.

3. I read a tough but good book this past week for book club about a disturbing civil rights case in the early 1950s in Florida. It won the Pulitzer Prize a few years ago; the book is called Devil in the Grove: Thurgood Marshall, the Groveland Boys, and the Dawn of a New America by Gilbert King. 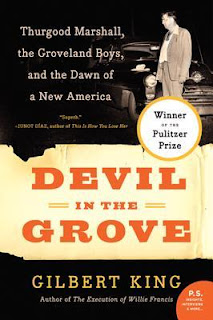 I can't stand to look at the man on the cover of this book--he was like the devil himself. Reading about what he did infuriated me.

Anyway, my dad is visiting and he saw that I was reading this book and we were talking about it and I found out some interesting but disturbing information about my family history. My dad was born in Florida right around the time this trial was happening. His father--my grandfather, who died before I was born--was part of the racist culture down there and if they had lived in the area where the incident happened, he very well could have been one of the men who protested against these four innocent black men who were accused of raping a white woman.

And his father--my great-grandfather--was a member of the KKK in Florida. I had no idea about that. My dad even has the KKK gavel he used to call meetings to order. It's sad to learn hard things like that about your ancestors, but I'm grateful that we descendants are doing so much better than that a few generations later.
I love and appreciate the human capacity for change and reformation, of going from ignorant and wrong to informed and good.

It's interesting that on my dad's mom's side I have good, strong Mormon pioneer ancestors, some of whom were friends with Joseph Smith, and on my dad's father's side we have the KKK. What a dichotomy! People and life situations and choices that are made can be so very different, even in connected families.

4. I read this quote this week and it describes very well how October ended and November began this past week:

"October extinguished itself in a rush of howling winds and driving rain and November arrived, cold as frozen iron, with hard frosts every morning and icy drafts that bit at exposed hands and faces."--J.K. Rowling

Our power went out Halloween night because of the wind, and it was very rainy last week, and this first week of November has been chilly, and this morning it's in the 30s! J.K. Rowling nailed it.

A weekend in New Hampshire with four of my best friends from high-school.

Newport, Rhode Island mansion-touring with some of my other friends. I'm hoping to do a "below stairs" servant tour at one of the mansions. I've never done one of those and have been wanting to for awhile.

I planned a pizza and game night with some of my siblings and my niece and a couple of others. We all enjoy playing games, and it should be fun!

Thanksgiving (once we figure out what we're doing for it!)

Getting and decorating the Christmas tree, and decking the halls for my favorite time of the year.

Trying to get as much done for Christmas this month as I can so that I can enjoy the beauty and peace of the season more in December. This is my goal every year but I've never done as well with it as I wanted to. I hope this will finally be the year!