1. I got my first-ever gel manicure last Saturday. It looked great for about two days. But by Tuesday, I'd peeled the polish off three nails because it was starting to come loose on the sides and it was bugging me. By Wednesday, they were all off. So much for lasting for two weeks! Next time I think I'll stick with a regular manicure.

2. I sent out an e-mail to my book club group about the book we're reading for June, which was the book I'd chosen that luckily got voted onto the list for the year. It's The Hired Girl by Laura Amy Schlitz and it's really good. I included a link to the New York Times review about the book and that review includes one of the funniest lines from the story that's been making me smile all week when I think of it. When the main character gets her first kiss and is completely besotted and thinks it will lead to her and the guy getting married, she says, “I wonder how married men go off to work every morning, when they could stay home and kiss their wives.” 😂

3. I was reading the town paper this week and randomly John was in it! His name was listed for being selected to be part of the district band, which he had to audition for. Out of 600 kids who tried out, he got in. Their concert was a couple of weeks ago and it was outstanding. John is very good at trombone! (Especially since he hardly ever practices!)

Another achievement for John is that this week he found out he qualified for States for the hurdles! 🙌

4. Not to get controversial but this has been on my mind and I want to write something about it. It was in the news this week that the birth rate in the U.S. has reached a record low and now it's below what's needed to maintain a steady population. Guess what? Abortion has also been in the news in this week. Could there be a connection? I genuinely wonder if there is. I applaud Alabama's restrictive new law banning abortion because I'm ardently against abortion, which I believe to be the taking of human life and killing the completely helpless and innocent in its grossest and most selfish form. It's a tragic irony that our birth rate is stalling out yet millions of babies are aborted each year.

Abortion was the deciding factor for me when nine years ago I decided to become a registered Republican rather than the Independent that I was for years before that. I cannot support a party that actively advocates for abortion rights. I believe that abortion is one of the most shameful and evil things the U.S. does on the scale that it does it, that Roe v. Wade was a huge triumph for the forces of evil in this world, and that we as a society will one day be held accountable for the mass murder that has been taking place here for decades, when we'll have to ask ourselves "What were we thinking?" I truly think it will take generations of fighting against it, just like what happened with slavery and civil rights, when the general population will finally realize how wrong and immoral and unjust it is. I'm sorry, but women's rights do not trump human rights. I'm all about the right to choose in a democracy but some things are off limits--like killing people. And that should include babies in the womb.

(I know that there are all sorts of serious issues around banning abortion (the mother's life being in danger, rape, etc.), and what to do with all the unwanted babies that would be born or babies born into horrible conditions. They are valid concerns--hardly any of which justify the killing of babies--and there are some good ideas and programs out there to address them (not to mention ADOPTION--there are many couples with infertility challenges or who for other reasons would adopt these babies in a heartbeat, no pun intended). I've been researching the issue and I truly believe there are real and viable solutions out there. But the simplest solution of all is that people take full responsibility for the choices they make.)

5. Yard challenges. The pool was opened this week but won't be usable for another couple of weeks. Right now the water is brown and gross-looking and cold. 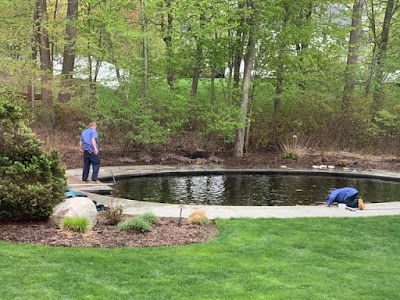 I put birdfeeders up on a tree in the backyard a few weeks ago but the squirrels were getting to them so I put them on hooks on the front porch, but now the porch has scattered birdseed all over it as well as some bird poop splatters. I don't know what to do! 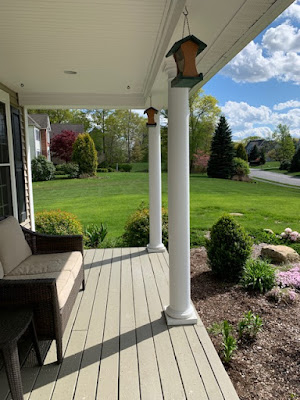 ...the floorboards are a mess! 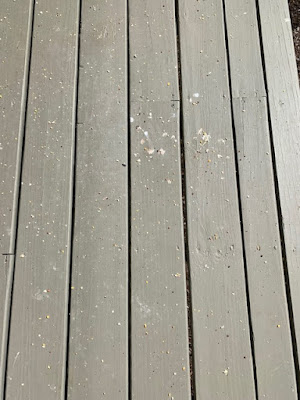 Yesterday was quite the time-consuming adventure of getting a big 5-piece fire pit set from BJ's to the house, as well as a new storm door for the front door from Lowe's. Thank goodness for my big bad SUV (even though it still took two trips to get it all home). And thank goodness for my handyman. I need to call him to put the fire pit set together and install the new storm door. I love that guy! 🔨 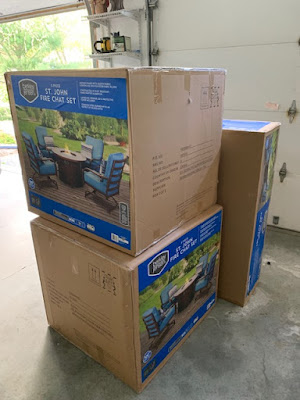 And finally, there's a big pine tree in the backyard that didn't completely survive the winds of spring and is now leaning over onto the tree next to it and needs to be re-rooted or whatever, so I need to make a call to a tree company to come and rehabilitate the tree. The fun never ends when you own a home!