1. It's apple-picking season. I have a bit of a "bah humbug" attitude about apple-picking. I personally don't enjoy it, and we haven't done it in years and probably won't anytime soon since the rest of my family doesn't seem to care. I think it's a nice old-fashioned thing to do, I just find it terribly inefficient. It's so much easier to let the pro's pick the best apples and pick up a bag at the grocery store. Then you don't have to deal with the weekend crowds at the orchards, walking around searching for good apples as you carry an increasingly heavy basket, wrangling your own bad apples (a.k.a. fighting kids), walking forever, waiting in a long line to get them weighed, etc. No thank you. I just got a bag of beautiful organic Gala apples at the grocery store this week. That's how I do apple picking. 👍 🍎

2. I'm on day 8 of the social media fast that President Nelson invited women to undertake in his talk at the Women's session of General Conference two weeks ago. It's going well. I don't miss it that much, although I do a little. I really only have one social media platform that I use, and that's Facebook, and that's enough for me. Since starting this fast a week ago, I've been better focused and have used my time better. And I don't know if it's coincidence but I've found myself feeling more content and peaceful.

I've also been more selective about the shows I watch because President Nelson asked us to consider fasting from any type of media that could be wounding our spirits. I feel good about giving the ax to some shows that I know aren't worth my time because of their overall poor-quality content. I'd been feeling that way for awhile about them, but this was the kick in the pants I needed to finally cut the cord, so to speak.

This fast has also helped me to evaluate the shows I do still watch and recognize the worldly elements of our souring culture that unfortunately find their way into most of them. It's sad how bad it's gotten.

So anyway, I like this fast. When it ends, I plan to be more intentional than ever about how and when I use Facebook, and I'll continue to try to watch only shows that are truly worthwhile (like Poldark!).

3. I talked to one of my good friends from Iowa on the phone this week. (Shocking, I know, because actual phone conversations with friends are a rare occurrence for me!) I miss her, and I miss it there a lot. The boys and I for some reason have felt particularly homesick for Iowa this week. Even though we all like it here, they both prefer their old schools and they miss their friends. John hates all the homework that he gets here, and Sam says his school here is more strict and not as fun. Having said that, they're both doing well in school and are making friends and are happy overall. I'm glad we live in Massachusetts, but parts of our hearts are definitely still in Iowa, and may always be.

4. Yesterday when I picked up the dry-cleaning I noticed that the nice lady who's usually working there was wearing the exact same shirt that Sam was wearing that day. It's a boys' shirt from The Children's Place that came out years ago (it's a hand-me down from John). Instinctively I almost said "Oh, my nine-year-old son is wearing that same shirt today!" but just in time I thought better of it and saved us both from potential embarrassment. The experience reminded me that there are many people out there struggling financially and in many other ways, and that I can choose to be sensitive and empathetic about it, rather than making silly comments that could inadvertently make someone feel bad. And I probably shouldn't make these assumptions about her--maybe it was a crazy morning and she just pulled on whatever was lying nearby and would work. Something tells me it's more than that, but I could be wrong. No matter what, the point is to be kind and treat others the way you'd want to be treated. It was a good reminder for me.

5. I've discovered the best laundry detergent! It's free of a lot of the chemicals that other detergents have, and it smells soooo good. It's Seventh Generation's lavender laundry detergent. I've been using their Free & Clear detergent for a couple years, and they recently came out with this lavender one (from naturally derived ingredients) so I gave it a try, and it's amazing! It makes the laundry room smell like lavender when I use it, and our laundry has the faint pleasant scent of lavender once it's all dry. I love it! 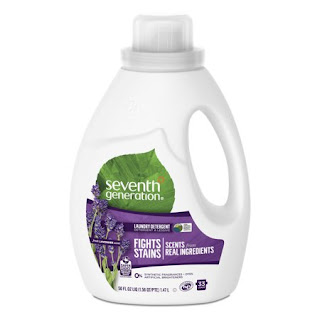