1. It's now the three-month mark almost to the day of closing on our new house and moving in! In some ways it's gone by fast and in others it feels like so long ago that we moved in.

The progress report: most of the house is put together and feels like home, with a few notable exceptions.

My project room is still full of unpacked boxes and isn't organized or put together at all, so it's pretty much an unusable room right now. I miss my old project room and know that the new one won't be as cozy and "perfect" as that one was, so my motivation to get this room put together hasn't been high. Plus I haven't had the time.

The basement storage room is a mess and is going to be very challenging to organize. I have A LOT of baby and little kid things that I just can't bear to part with yet, which makes storage space very challenging. There are also many shelves down there that need to be put together that the movers should have taken care of on move-in day but didn't (grrrrr). It's a mess down there and I'm not itching to tackle that one yet either.

I still haven't organized the garage, but my mom helped out with that over the summer so it's not a complete mess like the other two rooms. There's room to park one car but not two yet. I'm really missing our spacious three-car garage in Iowa.

I'm still working on hanging up pictures around the house. I still haven't gotten the CD player in the family room hooked up and working (yes, I still use and like CDs and I miss using them!). And a few other things like that.

I feel like I have a never-ending to-do list that gets added to almost daily. I haven't started exercising again or working on projects that I'd been working on methodically on a monthly basis. My once well-ordered life is no more, a thing of the past, and sometimes I feel like it's slowly driving me crazy not to have the order in my daily life and routines that I had for years, but I'm hoping by the new year after a good solid six months of adjustment that that that will all be back, and maybe even better than ever. 🤞

Other than those things, we're pretty well settled. The boys are doing great. Peter is only home on weekends because of his travel schedule, which is hard, but I hope that will get better in the future. He is at least loving consulting, and he's good at it. I miss Iowa and our life and house there, and there are days when I really wish we still lived there. But I love our new house, and it's really neat living in my hometown again after 20 years, and living near family is fun, and New England is in my blood and it feels right to be here, so overall I'm glad we're here.

2. I created a blog schedule that goes up through December 2019(!!). If I stick to it, it will get me all caught up by then so that I'm posting about my life a month after it happens rather than a year (or more) after like I've been doing for quite awhile now. I could just forget about the last year and be caught up now, but I use this blog kind of as a journal and scrapbook, so it doesn't feel right to skip a whole year like that. Plus, I think it will be therapeutic to go back to our last year in Iowa while adjusting to not living there anymore.

My goal for September was to finish my posts about the summer of 2017 on the Cape and I got that done this morning. October will be finishing up that summer, doing all of last September, and starting last October. And so on. Make sense? So most of my blog posts for the next year are going to be catching up, but my Five Things for Friday posts will be current and will allow me to write about things in "real-time," if that makes sense.

If you fail to plan, you plan to fail! Ha ha.

3. A few random quick things from this past week:

My credit card has been missing for a week! I think I lost it at Six Flags New England last Saturday. I've been checking the account online every day and no one has been using it. I don't know what to do--request a new card or cancel the card and get an entirely new one. That would be such a pain so I'm leaning towards the first and hoping that the card will turn up.

I went to a workshop about tapping for stress management. Not tap-dancing, but holistic tapping on meridian points on your body as a form of stress relief and clearing your mind. I like it!

I went to Sam's back-to-school night last night and two of my high-school classmates, one of whom was a pretty good friend, were there because they have third-graders too, which I didn't know! I didn't even know that one of them still lived in town. Also, the mother of one of the students in Sam's class is someone I recognize from high school too. I love it!

This week was finally the first full week of school. Yay!

I hope Brett Kavanaugh gets confirmed to the Supreme Court.

4. I officially renounce the cautious endorsement I made of The Miniaturist two weeks ago. I watched the last two parts of this three-part miniseries, and it was joyless, dark, and depressing, with no magic, real or otherwise, whatsoever. The first episode was good until the last scene, and that was the beginning of the downhill slide for the rest of it. The story didn't make sense and was full of unanswered questions, and it was literally difficult to understand with the lackluster sound dubbing. I'm disappointed that PBS Masterpiece is reflecting the poor values of an increasingly lost society in some of their programming choices. I felt that this story was yet another underhanded criticism of religion while supporting things that I personally find morally objectionable. I was very disappointed and won't be reading the book!

5. On the other hand, the new season of Poldark starts this weekend! PBS Masterpiece has been exactly on point with this show. I absolutely love it, and I've been reading the whole book series over the past year, which has made me love the stories and the characters even more. I just finished reading The Four Swans and will be reading the next book in the series, The Angry Tide, at the same time that the show runs this fall, and this season is based on that book, so that will be fun! I could watch the whole season in a day or two through PBS Passport or by buying the DVD, but I want to extend the anticipation and enjoyment out over the next two months. I love Poldark, I think even more than I loved Downton Abbey! 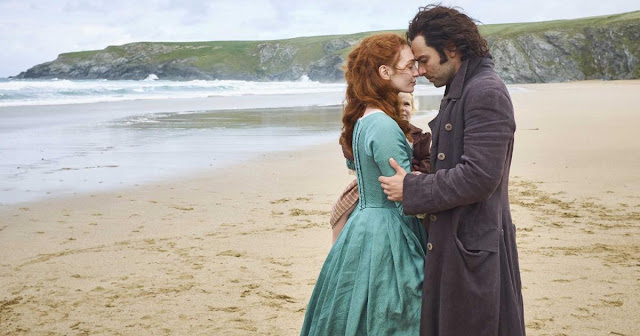