1. I have to say that I'm pleased by my self-sufficiency over the last week. I guess being on my own while Peter is away during the week is helping to bring it about. I learned how to use the snowblower and cleared off the driveway for the first time with it (and got completely soaked doing it!), I used the fireplace on my own (I'm no longer afraid that I'll set the house on fire), I made grilled cheese sandwiches for the first time (yup, first time), I made homemade hot cocoa for me and the boys on our snow days, I made pancakes for breakfast (I usually only make them for breakfast dinners), and I made special Valentine's Day popcorn for Sam's class valentines. They're small things, but they make me feel like maybe I really can achieve my dream of becoming more like one of my lifestyle icons, Martha Stewart!!

2. Speaking of hot cocoa--because as nice as homemade cocoa is, most of the time it's easier to go with the instant variety--I discovered a great new brand, and it even has a British name!
It's Ticketyboo Hot Chocolate. I ordered the Original flavor. It's delicious!

3. My great find of the week was this connect-the-dots book, currently on sale for only $5.99 from Bas Bleu. It's called "Dot to Hot" which I think is so funny. I like complex connect-the-dots books; I think they're fun and they help keep my mind from turning into a marshmallow. This one will be no exception. I'm looking forward to "connecting" with Mr. Darcy and those other literary hotties. Ha ha! 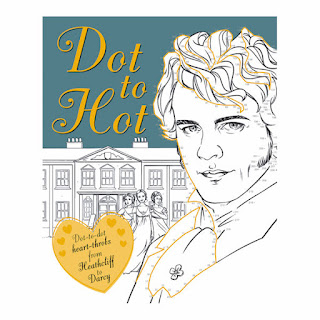 4. Speaking of hotties, Peter sent me a bouquet of chocolate-covered strawberries from Edible Arrangements for Valentine's Day. I ate all of them over the course of two days. I had to before they went bad! I'm not going to mention how many there were, but it can't be that bad because it's fresh fruit and dark chocolate. Edible Arrangements has THE BEST chocolate-covered fruit--it's all really good quality, fresh, and super-delicious. We've tried other companies before and no one has ever been as good as them. Literally!

5. My heart is heavy because of the school shooting in Florida on Wednesday. I still feel traumatized by the Sandy Hook elementary school shooting that happened five years ago, which absolutely broke my heart and still leaves me in tears sometimes when I think about it. I feel so terrible for all of those affected by these shootings, but especially for those who lose a loved one, especially when it's their child.
It's a sad sign of the difficult times in which we live that I have to talk to my innocent kids about what to do in an active shooter situation, and that I worry about their physical safety at school. I pray every morning for them to be safe that day. I also pray on a daily basis for those affected by these shootings and other tragedies, even months and years after the events happen.
When tragedies like school shootings and the Las Vegas massacre and the wildfires in California fade from the news, there are still so many people left with broken hearts and post-traumatic stress disorder and depression and the grief of bereavement and so many other things. My heart goes out to them. Selfishly but also sensibly, I hope and pray never to be counted among their ranks. It's such a comfort to know that one day, all will be made right, and that everyone will be reunited with their loved ones thanks to the Atonement of Jesus Christ.

To end on a more upbeat note, this weekend I'll be taking the boys to see Peter Rabbit (I like Peter Rabbit and when John was a toddler he was obsessed), Peter and I are going to have dinner at a new restaurant we've been wanting to try, I'm going to continue to be in denial about moving, and John's going to give his first talk in sacrament meeting!