In May we went to see Mary Poppins, which was being put on by Theatre Cedar Rapids. We all like the movie (it's a big-time childhood favorite of mine), and Peter and I enjoyed the Broadway production when it was on tour in Des Moines a few years ago. Now it was time for our boys to enjoy an evening of culture!

Sam cracked me up on the walk over to the theater from the parking garage. He wanted to wear his sunglasses even though he didn't need them. He's so funny. 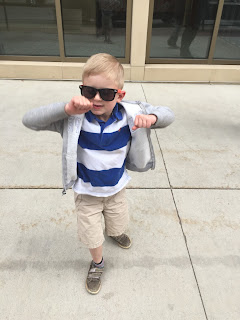 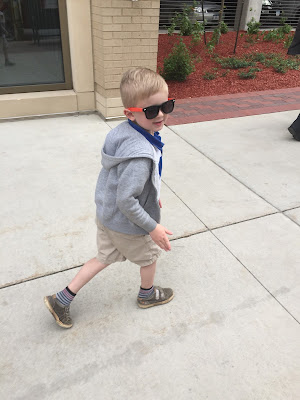 I was hoping this would be a cute photo, but the photographer (who shall remain nameless) didn't aim the camera high enough and cut off the top of the saying, which was "I flew with Mary Poppins." And one of the kids didn't even know a photo was being taken. A little later I had to gave him a gentle lecture about taking better pictures. 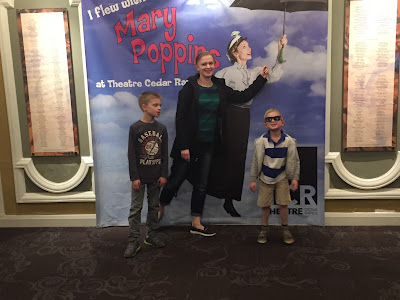 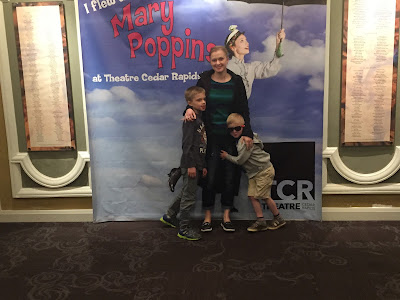 There was an old-school telephone booth there that was being displayed as a cool retro item from history.
I remember these from my childhood. Are they really that old-fashioned? Dang cell phones. 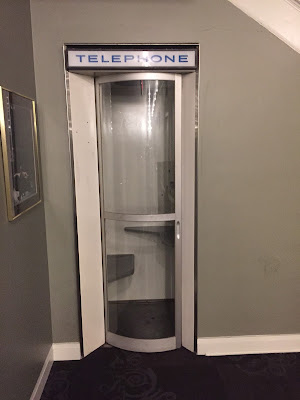 Our seats weren't the best. I found out about the musical pretty late in the game and it was a very popular show, so the tickets sold out fast. But at least we got tickets! 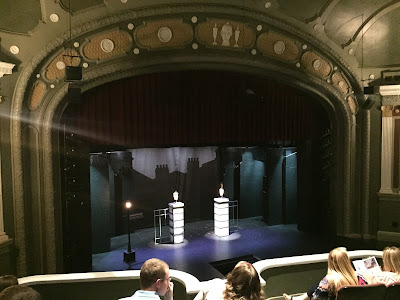 It was a fun night, especially when Bert and some of the chimney sweeps walked up and down and upside down on the set, and Mary Poppins flew across the stage. There was a couple in the show who are in our church stake too, so that was neat. I do wish the musical followed the movie a lot more and used all of its songs, because the movie is much better and more entertaining than the book!
It was fun to fly with Mary Poppins!

*I've written about Mary Poppins a few times over the years: Scary Mary in 2008 (a short and funny video on YouTube), Mary Poppins the Monster in 2011 (a somewhat scathing review of the book), and in my last post of 2013 (about the Saving Mr. Banks movie).
Read 'em and weep. Ha ha ha.