Well, to continue the theme of houses and house redecorating that I seem to be having this week, I'm going to write about that again, but this time these are changes that we made in the last year to our real house here in Iowa. It was starting to feel a little left out with all this talk about a house on Cape Cod, so it's time to give it a bit of attention here on the blog. I feel especially motivated to write about this right now since we've been spending so much time at home during this never-ending arctic winter!

Almost all of the things we did to our house last year were in the living room and family room.
It started with this accent chair that I bought at target.com at the beginning of last year. That really did set off a chain reaction as I predicted it would (which I wrote about in this post). 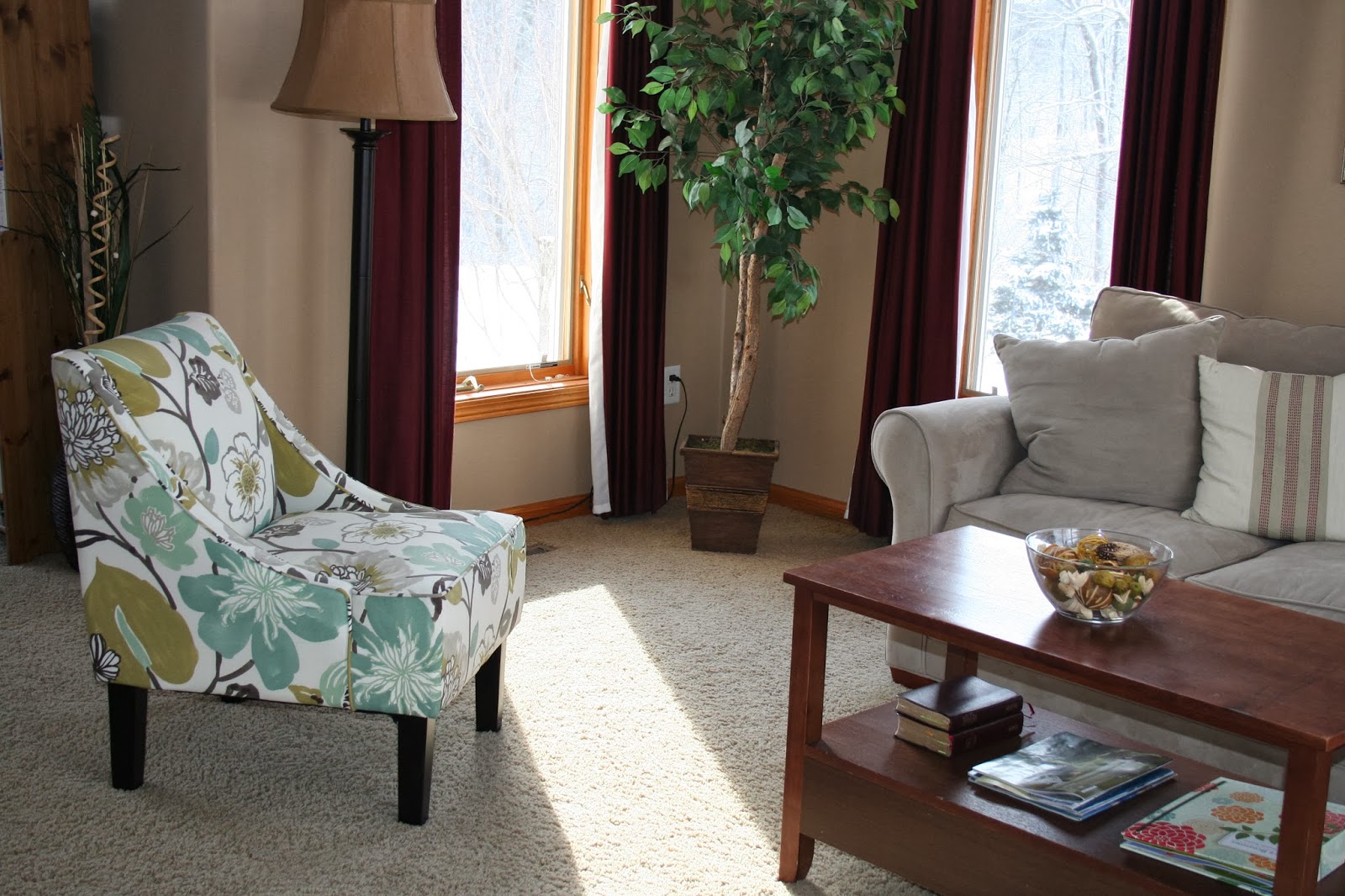 Next, we got our dream bookshelves. 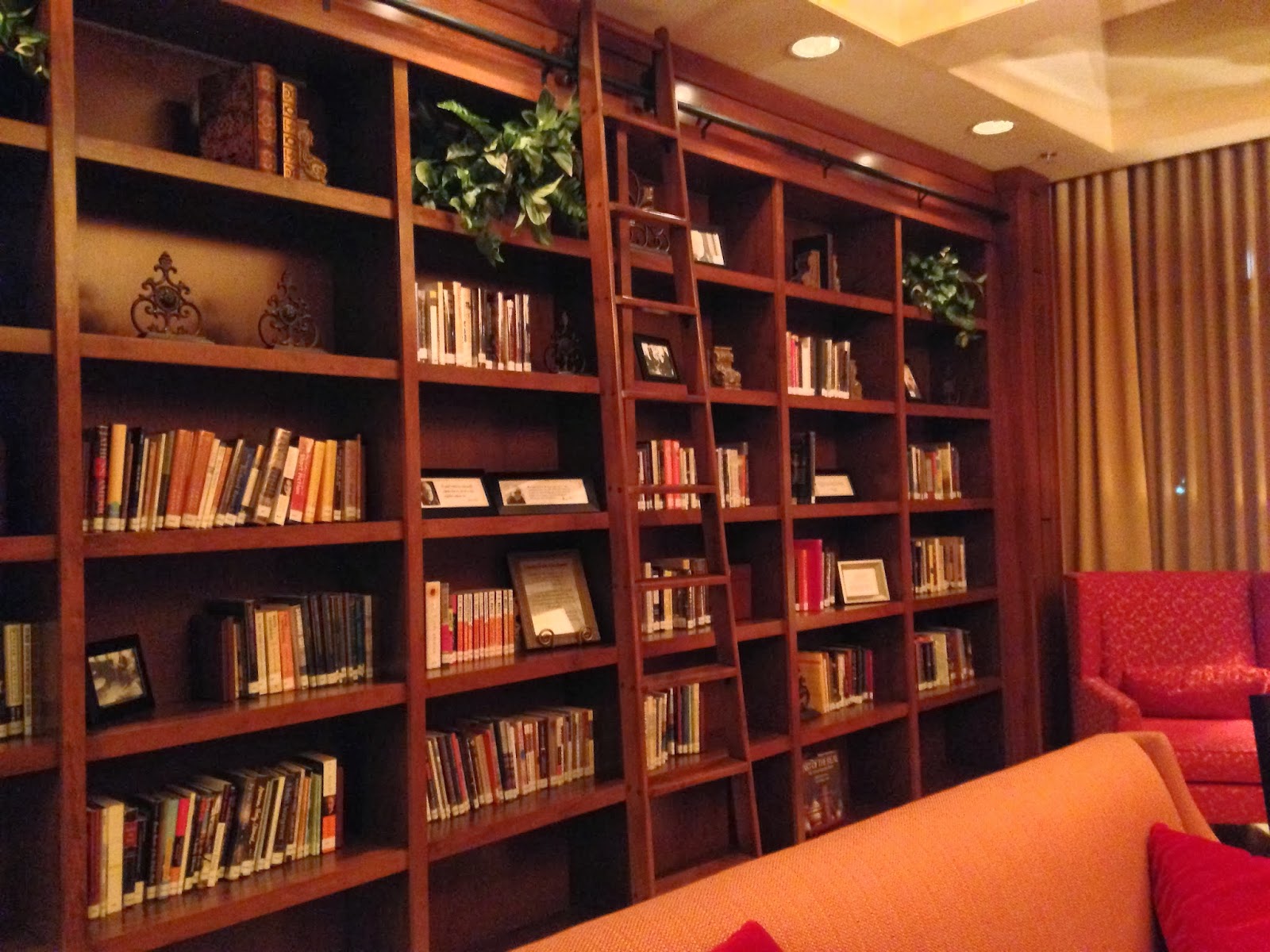 Ha ha. Just kidding!
I wish we could have a whole wall of floor-to-ceiling bookshelves like this. (I took this picture at the local Marriott hotel. It has a great library room!).
This is the real bookshelf we got. It's a beautiful shelf and we love it.
Eventually we'd like to get the coordinating set of shelves for the wall across from it.

Next up was new window treatments for the living room. I'd never gotten real window treatments before. I'd always bought simple valance curtains and vinyl blinds at places like Target and Wal-Mart. Our house came with maroon drapes when we bought it. They were okay, but they were dark and starting to show their age. I didn't think they went well with the airy feeling of the room. I hired a professional window treatment company and they did a great job, but DUDE (as John would say). It cost WAY MORE than what the nicest window treatments at Target, Wal-Mart, and Bed Bath & Beyond combined would cost. Peter was not happy with that, but we are happy with how much they they lighten and brighten the room up. Because of their cost, these window treatments are here to stay pretty much forever, now. Fine by me! 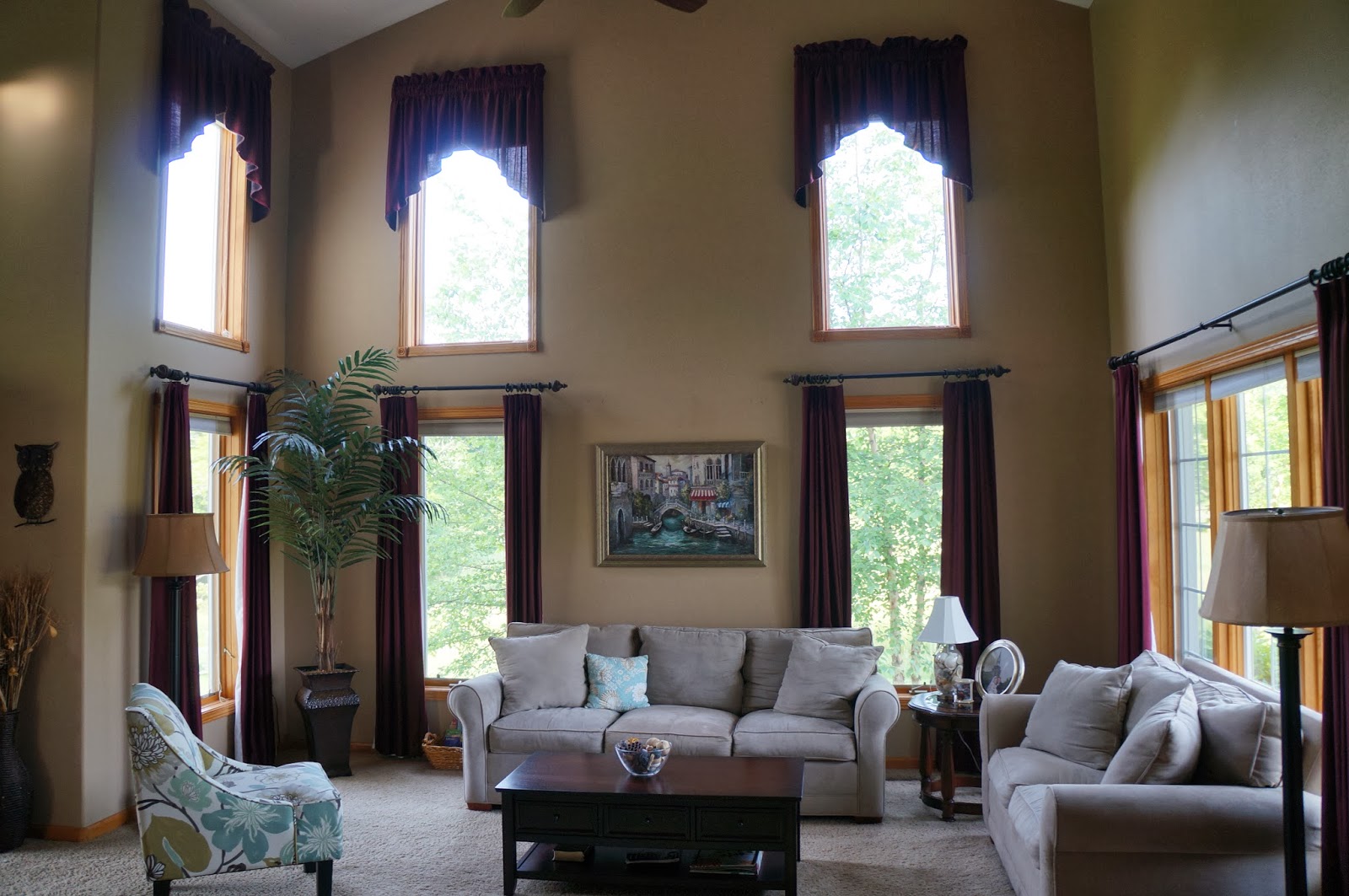 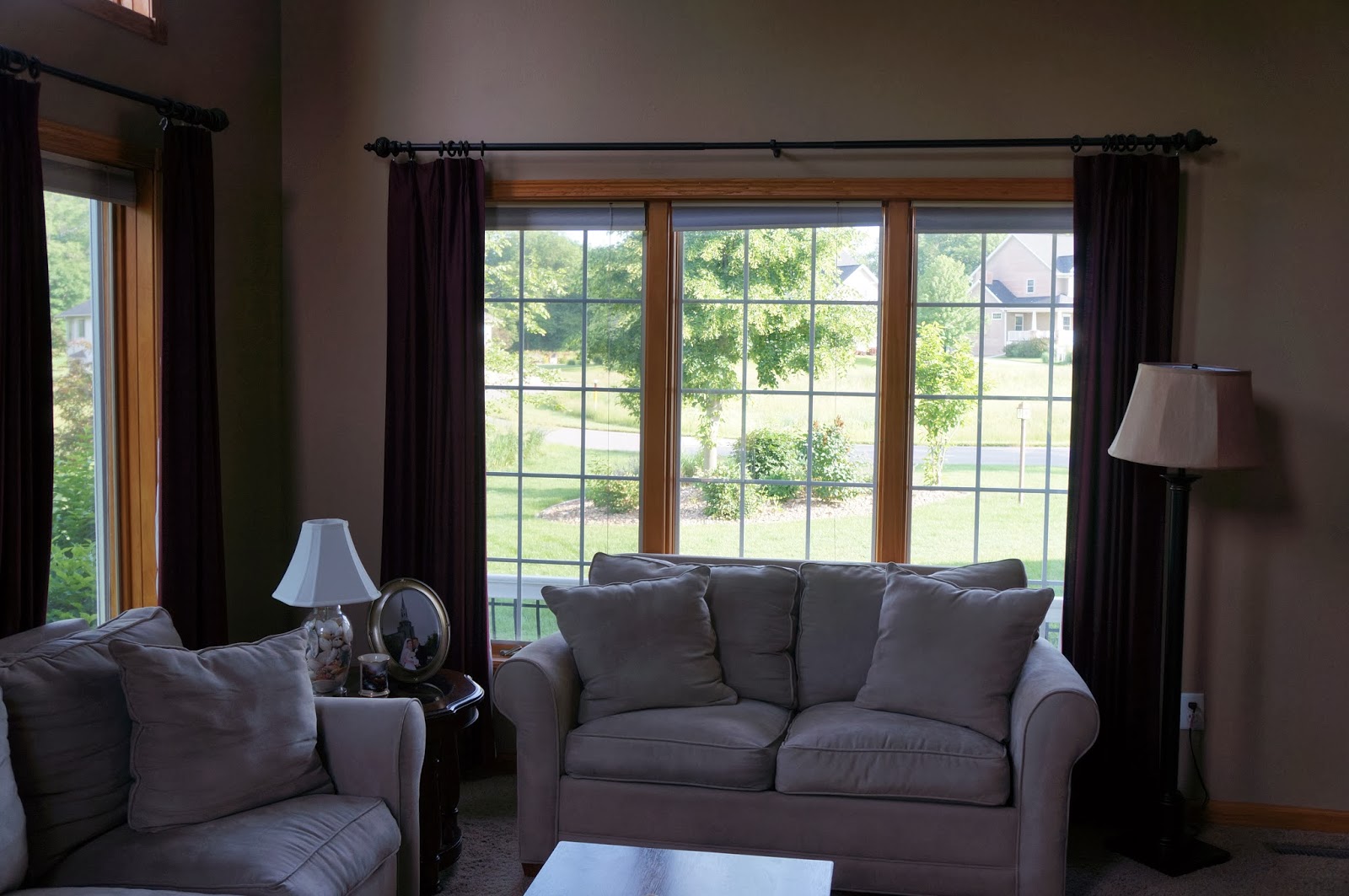 New window treatments: so much lighter, brighter, and more elegant! 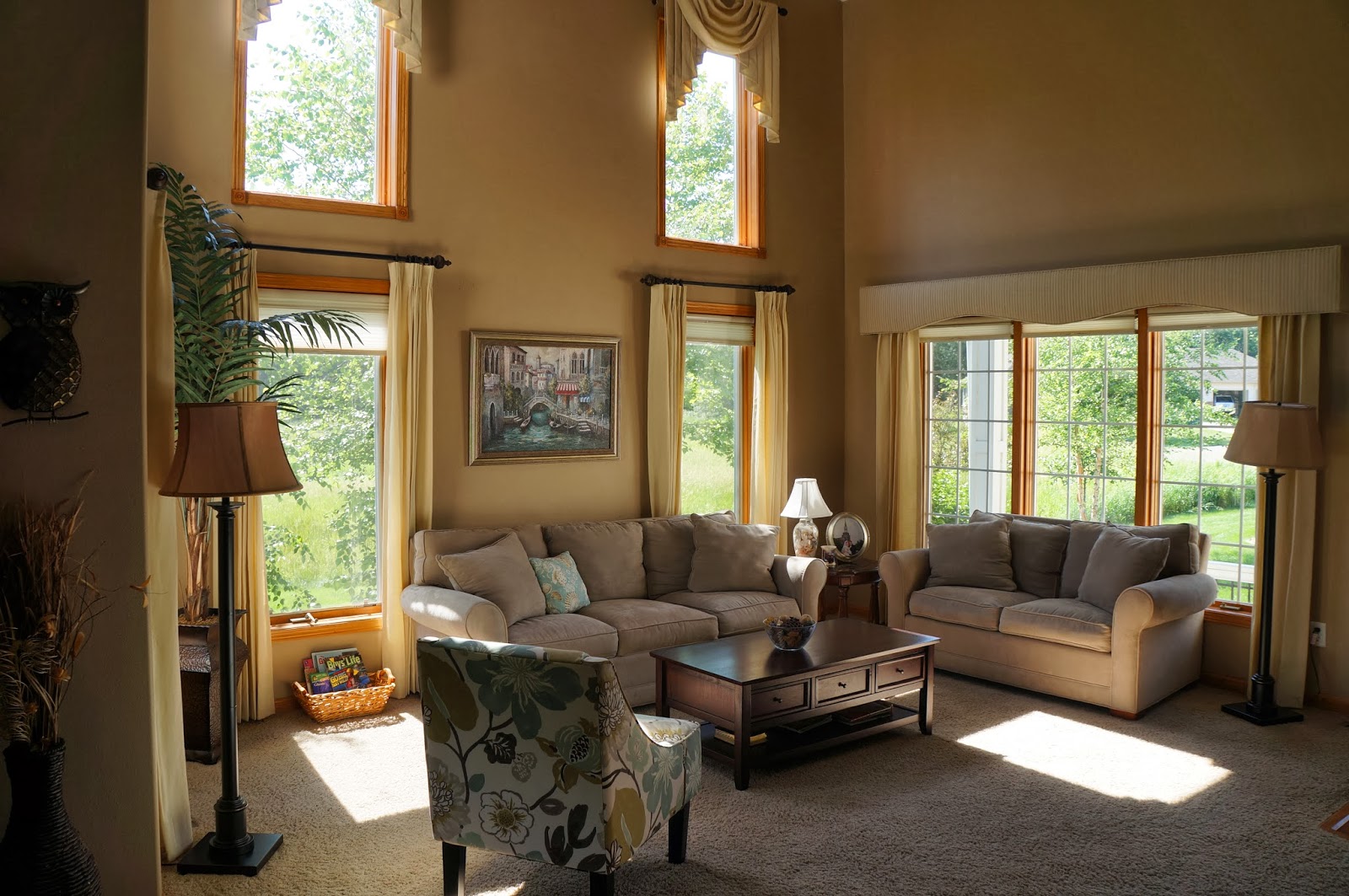 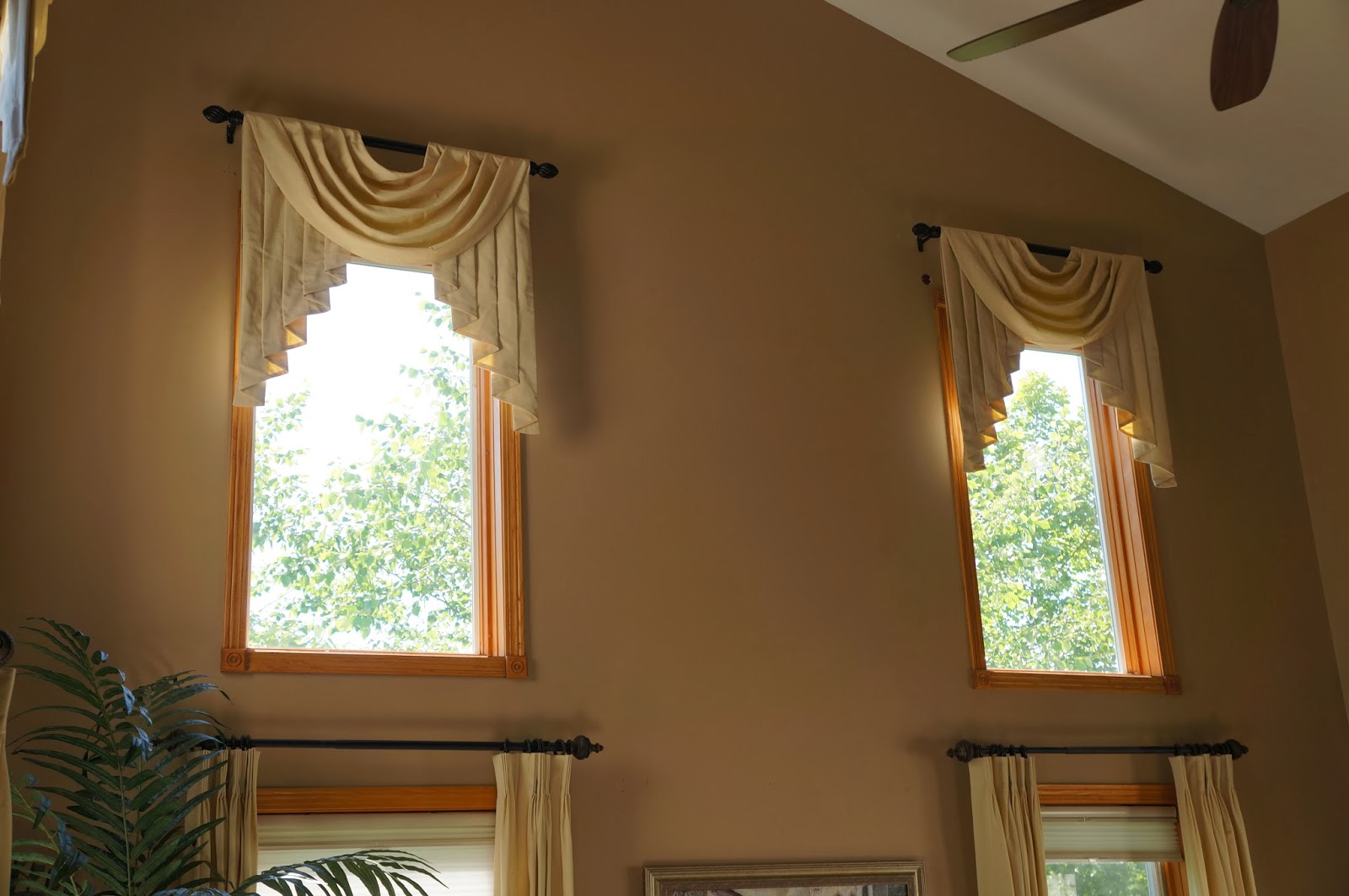 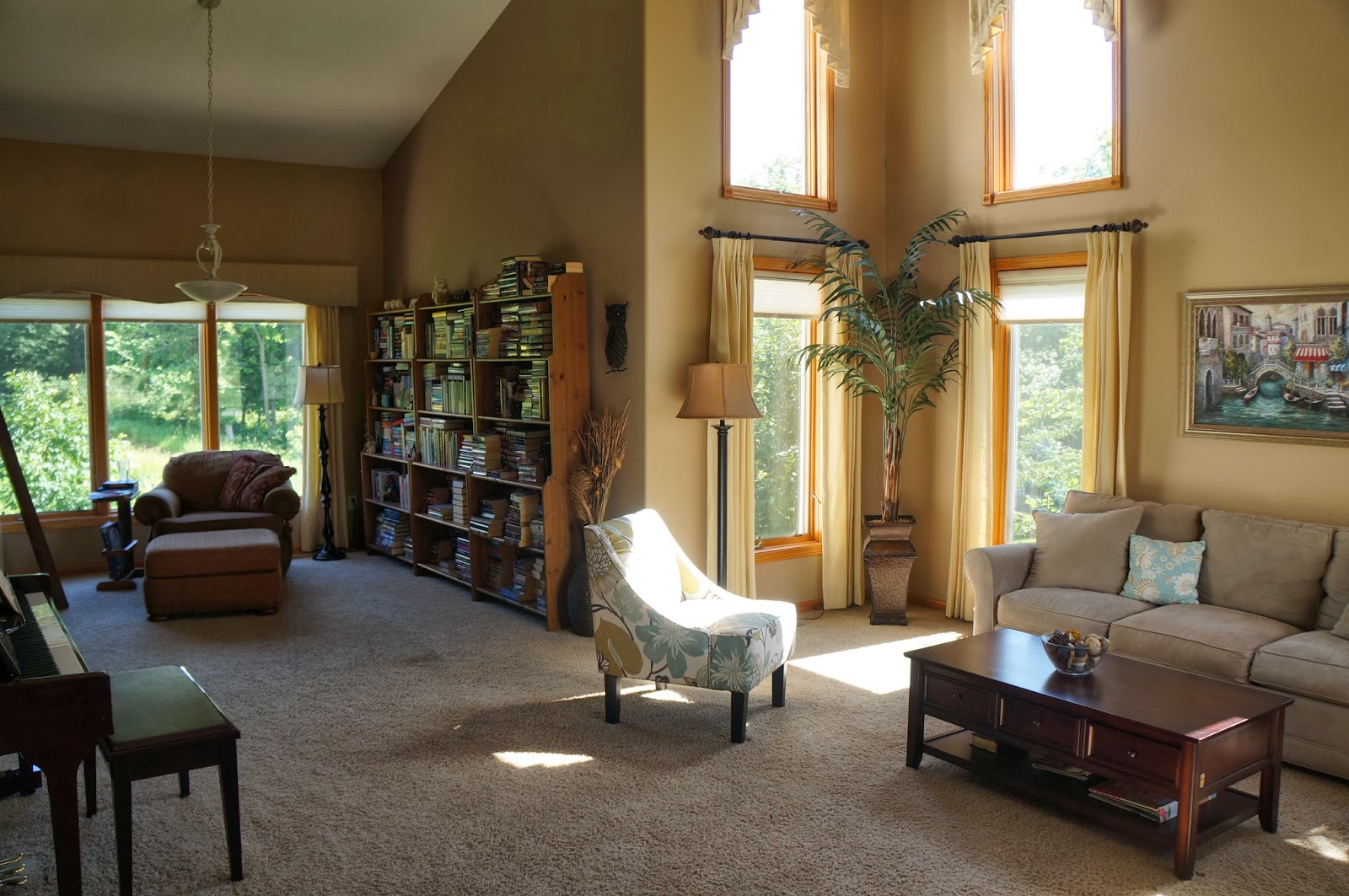 We finally replaced our trusty eight-year-old coffee table from Target with a new one from Pier 1. You can see it in the pictures above. It's nice, but I have to say that the Target table is the most scratch-proof, durable coffee table I've ever owned (which may not be saying much, since I've owned about three coffee tables in my life, but still. Target makes some good-quality furniture!)

I also got a new fake tree for the corner, which is in the pictures above, and as I mentioned in another post recently, I got a matching toss pillow for the couch that matches the accent chair (from Etsy, not Target!). 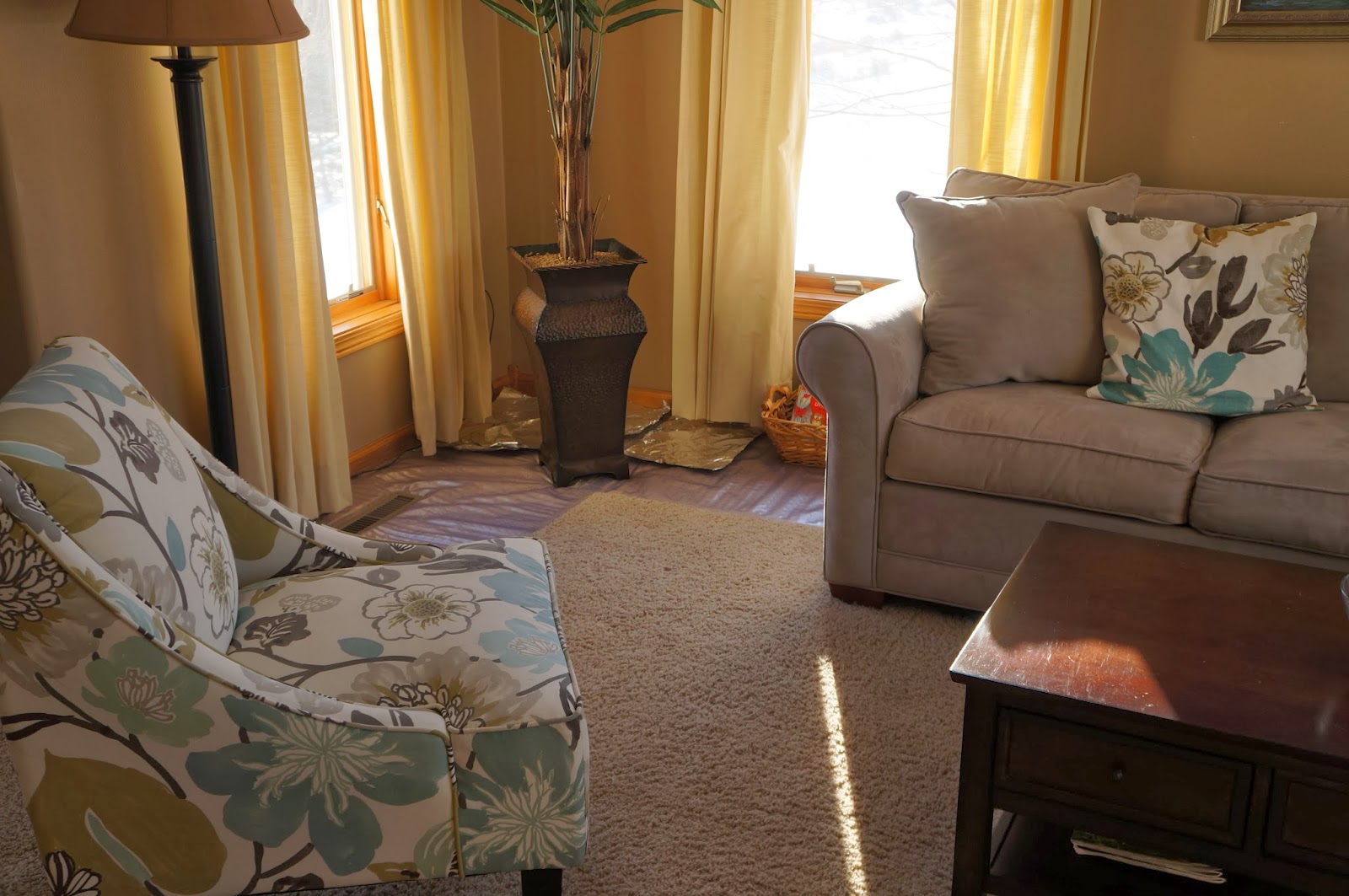 Almost everything in the living room is now new except for the wall of three Ikea bookshelves, the first one of which we got as newlyweds, and the side table next to the couch was also a newlywed purchase from a friend's garage sale. It once sat in the office of a Manhattan millionaire and is a really nice table, especially for the cheap price at which we got it. The couch and loveseat set are eight years old but they're holding up well. The painting of Venice that's above the couch is the same picture we've had above our living room couch in New Jersey, Connecticut, and now Iowa. I bought it for $99 at Bed Bath & Beyond ten years ago. I like it and see no reason to change it until I'm tired of it. (I keep saying "I" because nobody else in the house really cares about this stuff!)

The other big change to our house last year was that we got a new family room couch. This was done out of necessity, unfortunately. The one that we had was only three years old(!!) but our two cats went crazy one day and destroyed it and we couldn't ignore the smell of that destruction any longer. 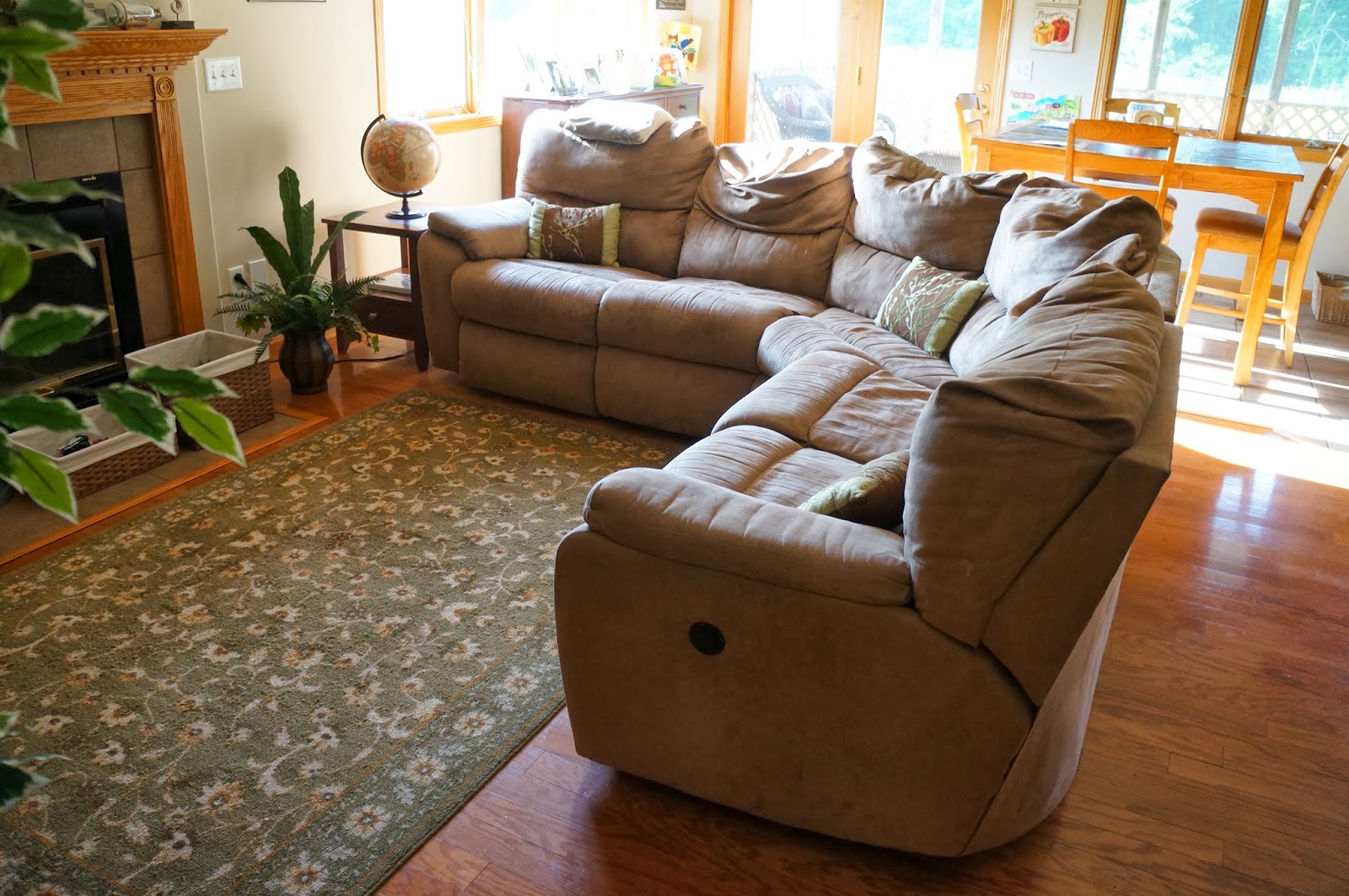 The family room is much bigger without a couch in it! 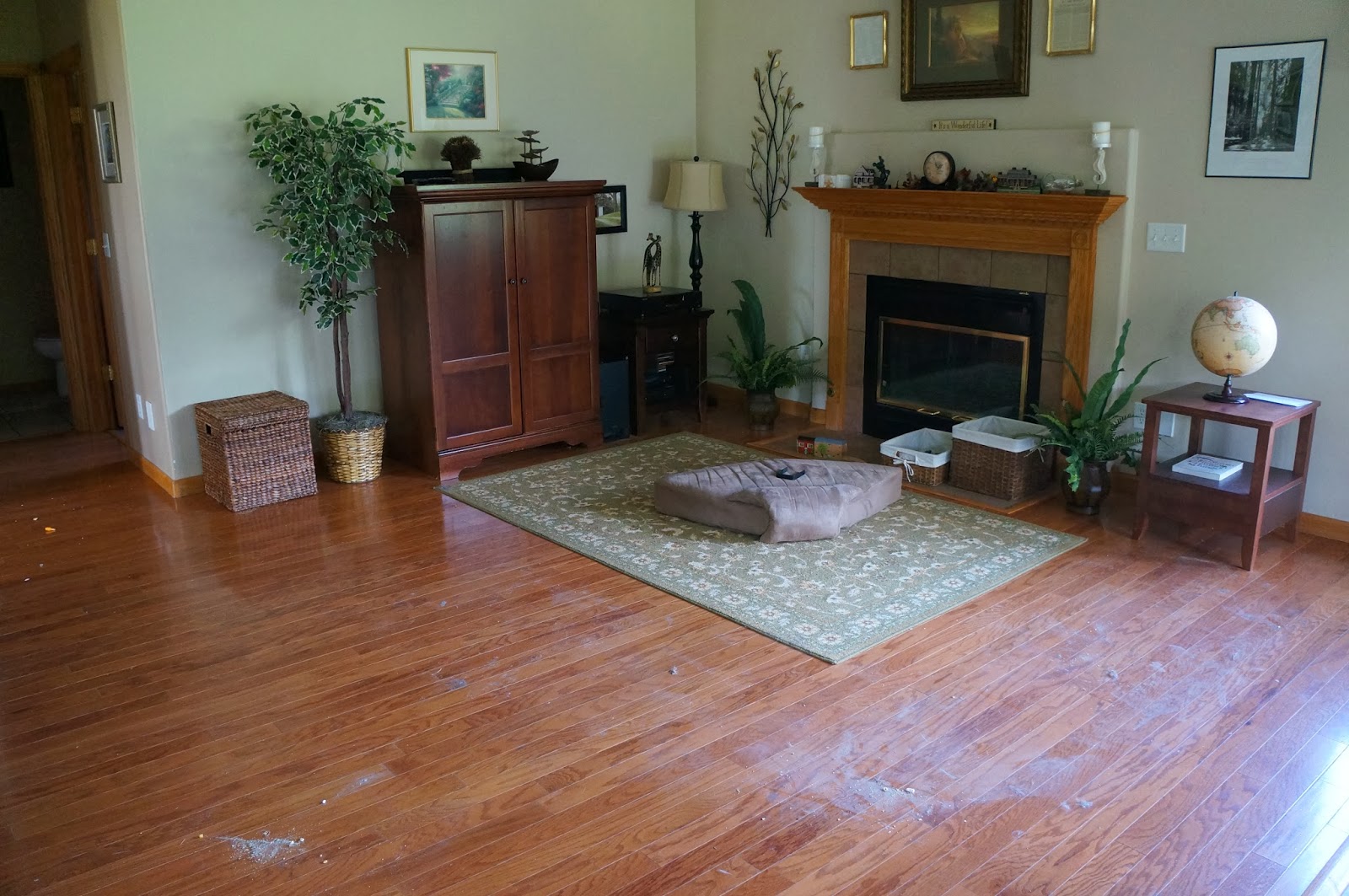 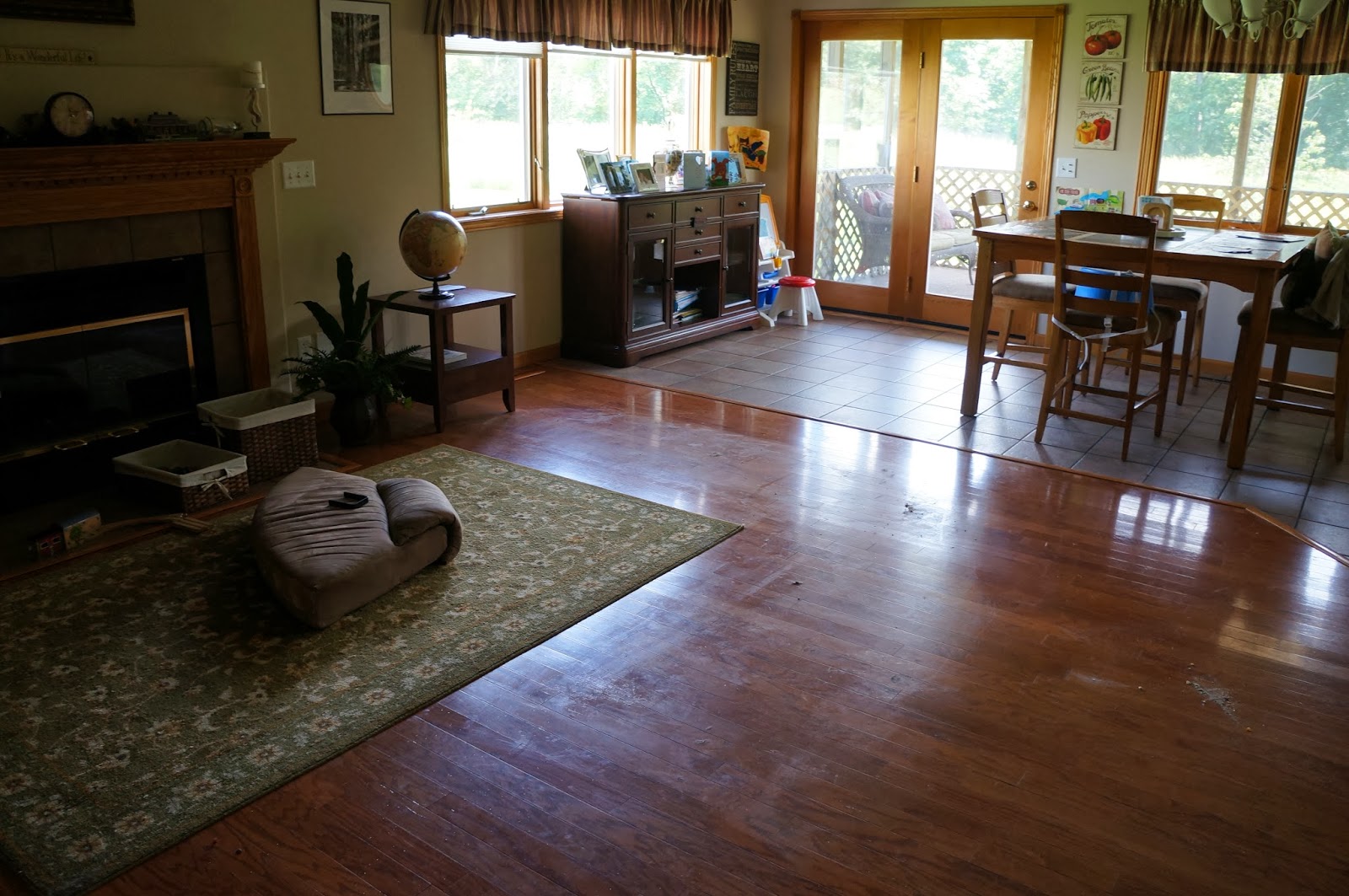 We decided to get a leather couch. I've never been a big fan of leather furniture but it can be very practical when you have pets and kids. Spills of all types are easy to wipe right up and they don't get down into the cushioning because leather is impervious to liquids. It's more comfortable than I thought it would be and it's supposed to get softer the longer you have it...which better be a long time! 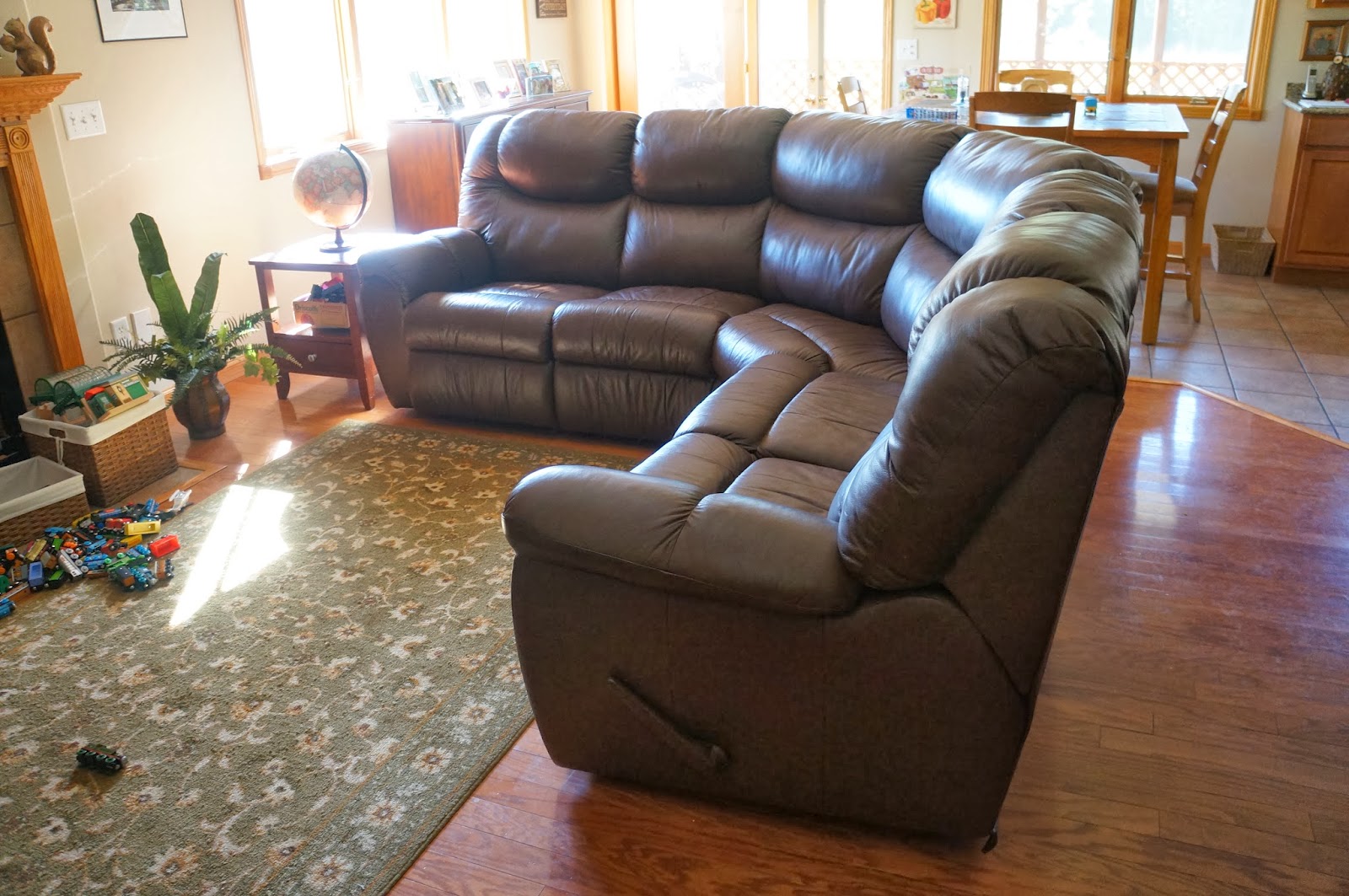 So those are the big changes we made to our house last year. I'm glad we made them because I think investing in one's house and home in both big and small ways is so worth it. There will not be many house changes happening this year, however. After the expenses of 2013 (Cape Cod house, cruise, WINDOW TREATMENTS!!), 2014 is going to be a lean year for us. But it sure was fun to do some redecorating last year. The house is happier because of it! (And so am I!)