If You Get a Cool New Accent Chair... 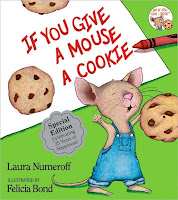 You know the children's book If You Give a Mouse a Cookie, where the boy gives the mouse a cookie and then the mouse gets thirsty and needs a drink and wants a straw to go with the drink, and it leads to one thing after another? There are many applications of that story to real life, which is one of the reasons that it's such a clever, relatable story. I have a recent example of this from my own life. It's a fun, good example! (Just don't ask my husband his opinion on the matter. You'll see why!)

For awhile I'd been wanting to get a chair for our living room to round out the seating area. Before it just had a couch and a loveseat with a coffee table between them, and I thought a chair would be both functional and aesthetically pleasing. I didn't want a big bulky recliner or an overstuffed easy chair (as comfortable as both of those are) because this was our "formal" living room, but I also didn't want an uncomfortable chair that was just for looks. I looked around at different stores and couldn't really find anything that I liked. So I resorted to my #1 secret shopping tool: the internet. And that's where I found it. On target.com, of all places. (Don't be dismissive of Target's furniture like I once was! They have some really nice, well-made things, some of which we've had for years.) I found exactly the type of chair I was looking for, and it had a cool floral design, which was a fun unique contrast with the rest of our furniture, which is mostly various shades of brown, beige, or taupe. 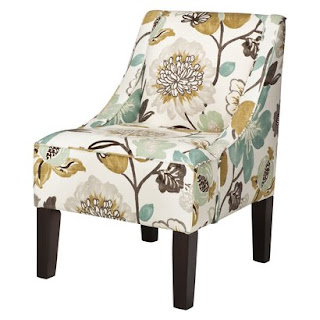 And here it is in real life: 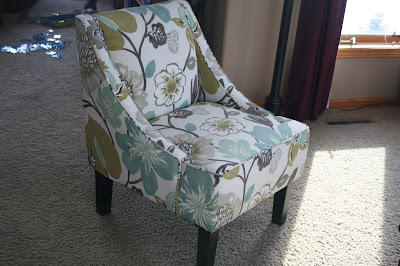 I love it! But I knew that Peter probably wouldn't. He kind of believes that comfort and style don't really go together. But I got it anyway, because it's my house, after all. (Hee hee. Well, it is.) And I unknowingly had a secret weapon: my in-laws. The weekend the chair arrived, Peter's parents were visiting from Rhode Island. His father put the chair together while Peter was at work, and his mother, who has a bad back, said it was very comfortable and she ended up using it a lot that weekend, even bringing it into the family room when we watched TV. It was that comfortable! I haven't heard much complaint from Peter since then. I win. :-)

I don't normally choose big prints like this. I like things that are more understated and classic. But it's nice to have a statement piece. And it rounds out the seating area just like I wanted it to. I think it's perfect! 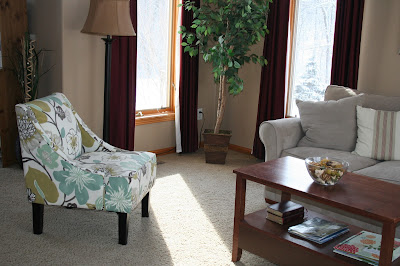 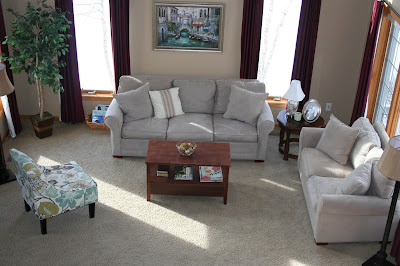 Here's where the "If you give a mouse a cookie" part comes in. Ever since we got the chair, I've grown increasingly tired of the window treatments in the living room. They're a nice maroon color, but they really don't go with the chair at all. Plus, I think they're original to the house, which would make them almost ten years old. I'd like to get something lighter in color and more airy in feel to match the already airy feeling of this room. So this spring I'm planning on hiring a decorator for the first time to help me pick out new window treatments.

And while we're at it, I'm in the market for a new coffee table. The current one is good but it's over eight years old--from Target! It has a funny stain on the top of it from our move and it really is time to get a new one. (We did get a new one when we moved here but I ended up hating it so we gave it away.) I also want to get an accent pillow or two for the couch that coordinates with the colors in the chair. And that ficus tree in the corner? Its days are numbered. It's going to get replaced with one that's bigger and better looking. This isn't vanity or pride talking here, it's purely design and aesthetics. And in another year or two, it might be time to get a new couch and loveseat. I love them but they're about seven years old and they're starting to show signs of their age. Just saying!

Who knew that a simple accent chair would turn out to be a significant reactionary agent of change and improvement?

Or in other words...
If you're going to get a new accent chair for your living room, you're going to want new window treatments to go with it. When you get the new window treatments, you'll notice that the coffee table is old and needs to be replaced. Once you the get the new table, you'll see that the decorative toss pillow doesn't match anything anymore, so you go and pick out a new one. As you put it on the couch, you see the cheap green leaves of your flimsy ficus tree, and off to the store you go to get a nicer one. After you put it in place and stand back to survey the room, you're dismayed to notice the sagging cushions of the couch and loveseat. Once the new couch and loveseat have arrived, you sit down in your accent chair and look around with a sigh of contentment and happiness. But then you turn around, and you see that the library room could use a new chair...

Like I said before, just don't ask my husband his opinion about all of this.
Posted by Donna at 9:30 AM