Stuck on a Ship with Lots of Good Food!

(Well, "stuck" is probably not really the right word, but you know what I mean!)

Not to be redundant or anything, but the Disney Fantasy is quite a nice place to be. It's a beautiful, relaxing, entertaining ship that takes you to fun places, is filled with the classic beloved characters of your childhood, and is brimming with delicious food to keep you well-fed on your voyage. I'm amazed that cruises are able to feed 5,000 people the way that they do, multiple times a day for many days at a time as they sail the ocean blue.

We were very happy with our dining experience on the cruise. The food was fresh and delicious. Everything was well-organized so that mealtimes weren't crazy times. Half the people on board were assigned to eat dinner at 5:30, the other half at 8:00. Luckily we got into the 5:30 rotation. You're put on a dinner schedule and rotate through three restaurants as the nights progress. You're on your own for breakfast, lunch, and anything in between (and dinner too if you want), and options for those meals abound, and of course, everything is free ("free") because it's included in the price of the cruise (unless you choose to eat in the two fancy restaurants on the top of the ship. More on them later!). You're also served by the same serving team  each night so that they get to know you and your tastes very well. We really liked our servers (more on them later too!). And I liked that there were Frette linens on the tables--now that's high-class! High-class but never stuffy or snooty, and very kid-friendly. It's a Disney cruise, after all! 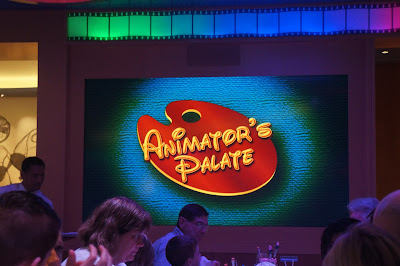 The restaurant we ate dinner at on our first night of the cruise was Animator's Palate. (I think this name is so clever!) It is technologically amazing. We'd never seen anything quite like it. The laid-back sea turtle Crush from Finding Nemo was on screens throughout the restaurant and he talked and interacted with audience members, responding to what they said instead of using timed, pre-programed responses. How'd they do that!? 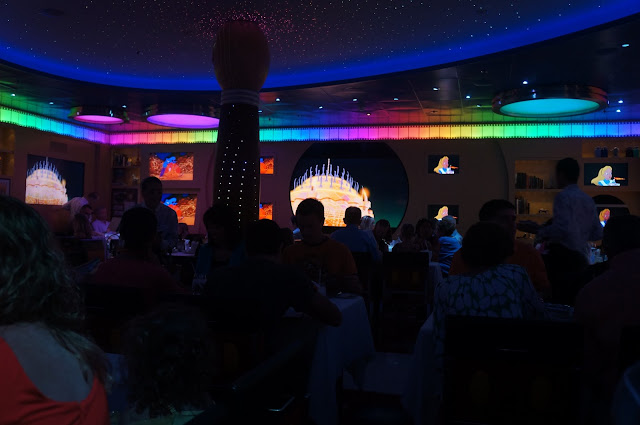 The second time we ate there, we each drew our own character on a special piece of paper, and a little later as we dined, a special show played on each of the screens and featured our characters, who had come to life! They were accompanied by the music to Fantasia. It was so neat!

That rather pretty lady on the right was drawn by me. 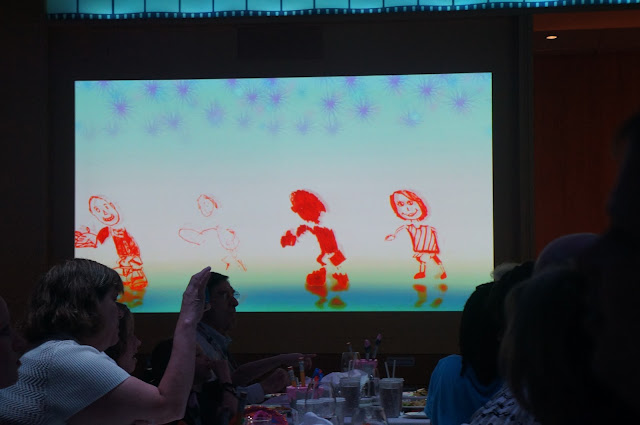 At the end of the film, they ran everyone's signatures as contributors. Can you find our names? (Donna, Peter, and John. Sam didn't do one.) 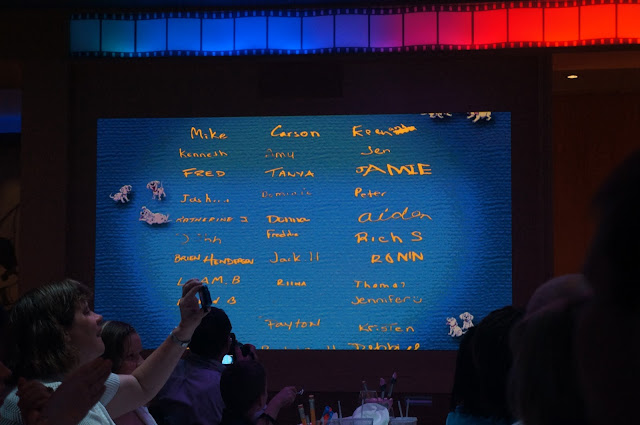 We ate dinner in Enchanted Garden the most. It was pretty and relaxing and the food was delicious. There was a different theme for dinner each night in all of the restaurants (like Pirate Night). Disney has very tasty and unique offerings for both adults and children. But Sam still wanted mac & cheese for dinner every single night. That kid didn't know what he was missing! John was more adventurous and he's a soup-lover so he really liked trying out a different soup each night, followed by a main course and dessert. 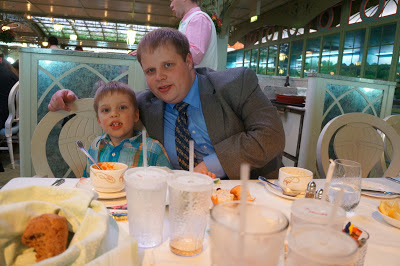 When we got to dinner each evening the table was set and ready with crayons for the kids to use on the activities on their menus, as well as labeled cups with the boys' names on them filled with apple juice, their favorite dinner drink. 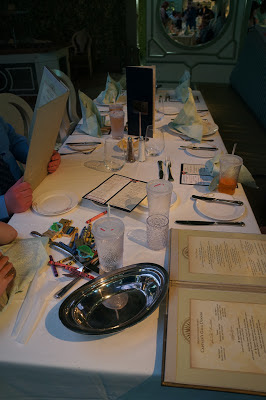 I broke with my usual protocol and let Sam play the iPad during dinner for the sake of peace and quiet and an enjoyable dining experience when he was overtired. Despite my misgivings on this slight breach of etiquette, we were all happier because of it! (And at least he was playing a Mickey game. Ha ha.) 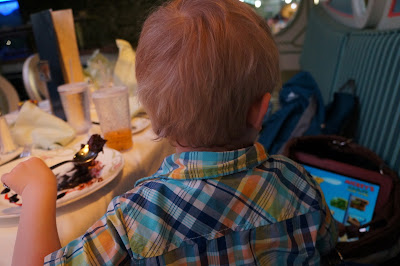 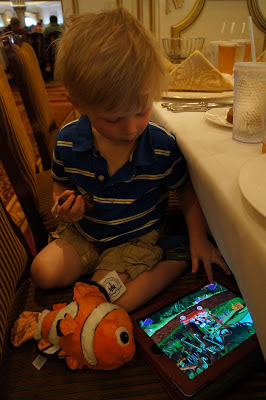 My favorite restaurant was Royal Court, which I've written about before. I really liked the regal, elegant atmosphere and decor there. We ate dinner there only once (it was on our last night of the cruise; we were supposed to eat dinner there another night, but we went to one of the fancy restaurants that night) and we ate breakfast there twice (including on our last morning right before we disembarked from the ship). 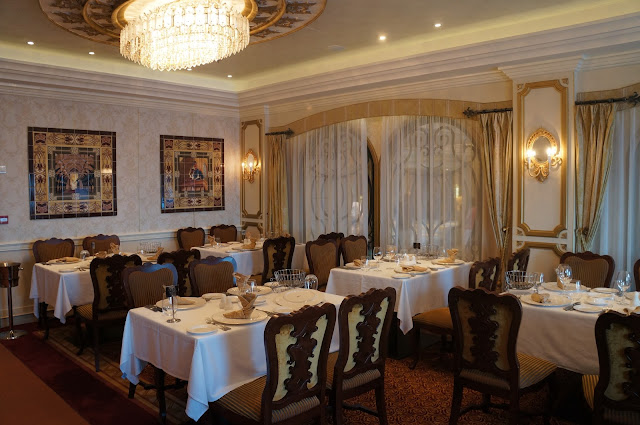 These were our servers, Henry (from Honduras) and Joseph (from India). They were really fun, nice guys. Joseph tried so hard to get grumpy Sam to play with him and share toys with him. He got a kick out of Sam's stubborn grumpiness and occasional smiles. It cracked us all up. 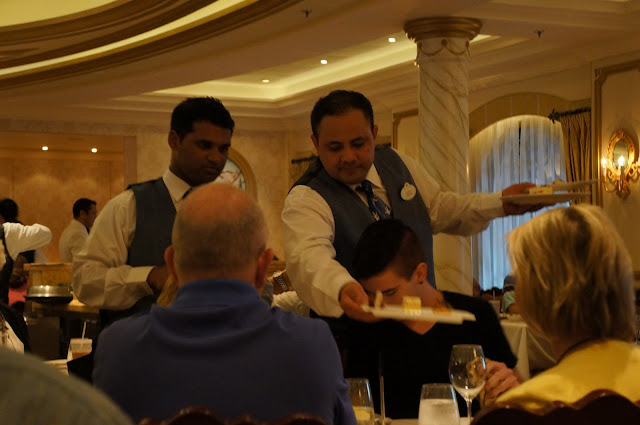 I wish this picture weren't blurry! This is me, Joseph, and Sam. It sums up Joseph's and Sam's relationship perfectly--Joseph the playful tease (holding Mickey Mouse ears to his head while holding Sam's new Nemo fish), and Sam having none of it. 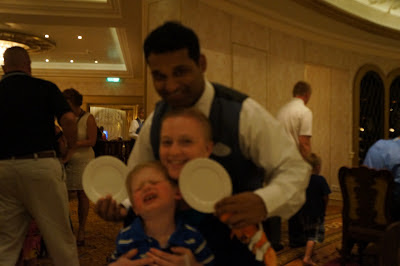 Henry was Peter's accomplice when it came to trying portions of various dishes and desserts that were on the menu in addition to his main entree. Those two got along quite well. 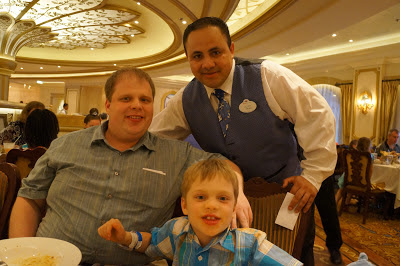 Almost every morning for breakfast we ate at Cabanas, a big buffet at the top of the ship. It was a good way to start the day--plenty of good food and unparalleled ocean views! 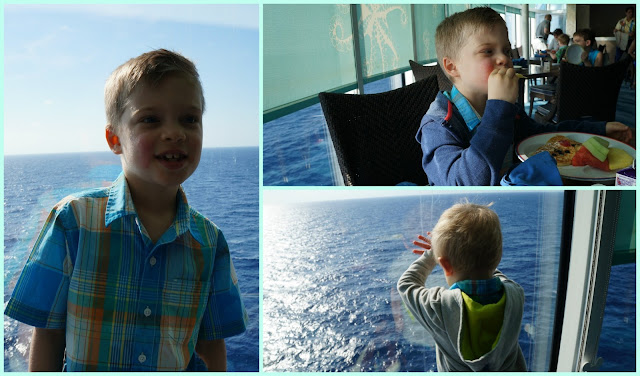 Cabanas has these beautiful tile mosaics on the walls like they have in Royal Court. I love these! 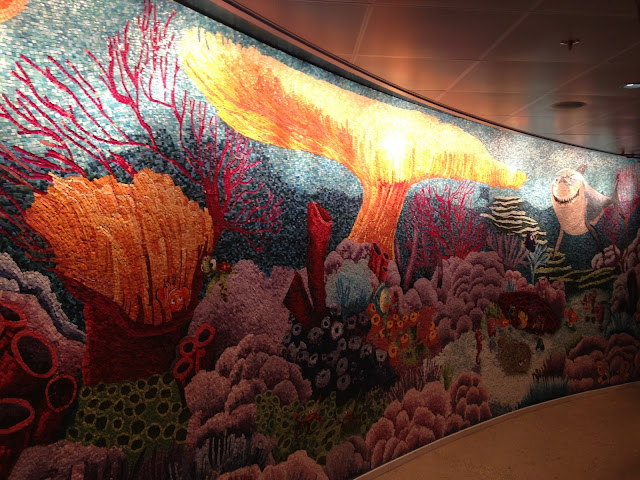 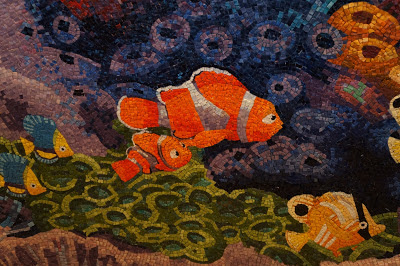 When we were at the pools at lunchtime, we'd eat at the cafe there. 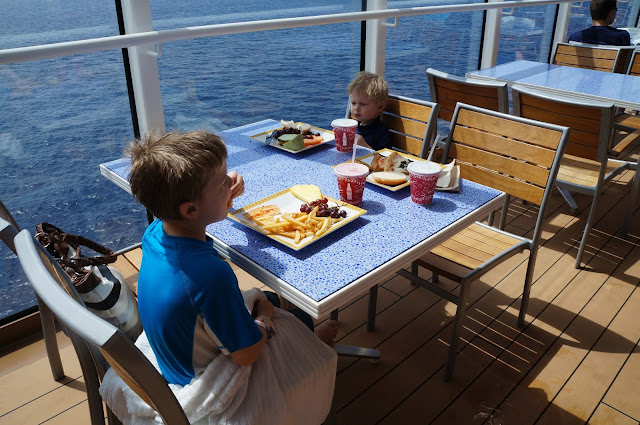 And last but not least, the "fancy restaurants," as I call them. There are two of them at the top of the ship that you have to pay extra for if you choose to dine there. Peter and I went out to dinner one night at Palo (seriously, click on the link and check out the pictures. I'll wait. It was a beautiful place to eat!). Kids are not allowed in Palo and Remy! And for good reason. It was a very delicious meal, and our European waiter was so attentive and took such pride in his restaurant. Peter got parmesan-crusted lamb and declared it the best lamb he had ever eaten. He practically went into a rapture over it. 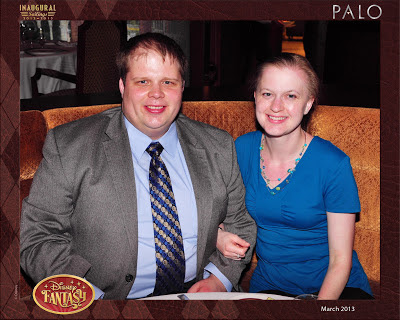 Our palates were very well-treated and satisfied during our week on the Disney Fantasy!