Pirates in the Caribbean 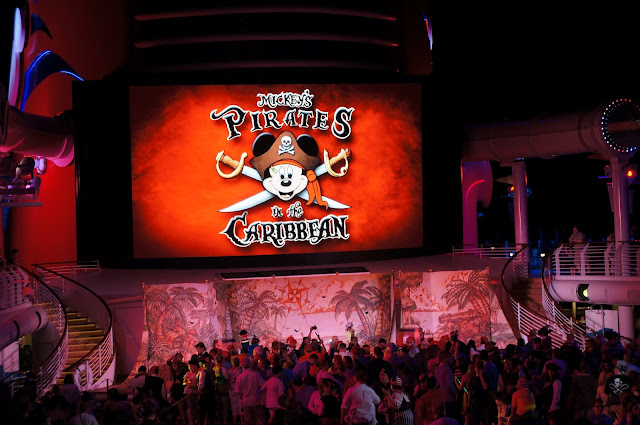 Last week I wrote about the princesses onboard the Disney Fantasy--now it's time to write about the pirates! Disney cruises have a Pirate Night where everyone can dress up like a pirate, even the characters, and there are fun shows on the top deck followed by fireworks at sea. The night before when our room attendant turned down the room, he left pirate bandannas for each person in our family to wear for Pirate Night. This was the bare minimum. Many people got totally dolled up and went all out in the pirate gear. So fun! We were boring and mostly stuck with our bandannas; maybe next time we'll get a little fancier. 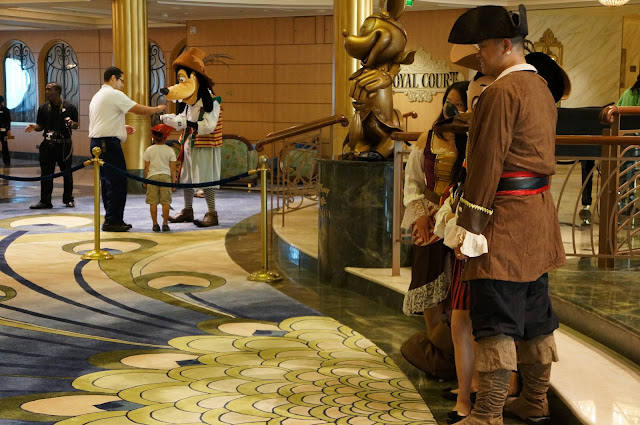 Those are some authentic-looking pirates!


At dinner the waiters were all wearing pirate bandannas and vests. 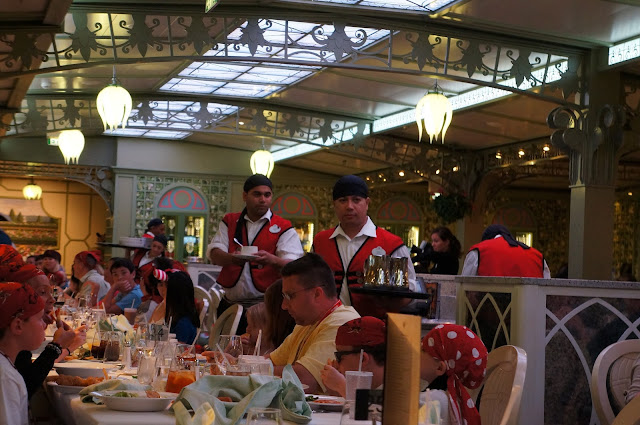 Sam and I got to meet Pirate Mickey before dinner. (John was at the Kids' Club, a place that he absolutely loved spending lots of time at. More about that in another post!) 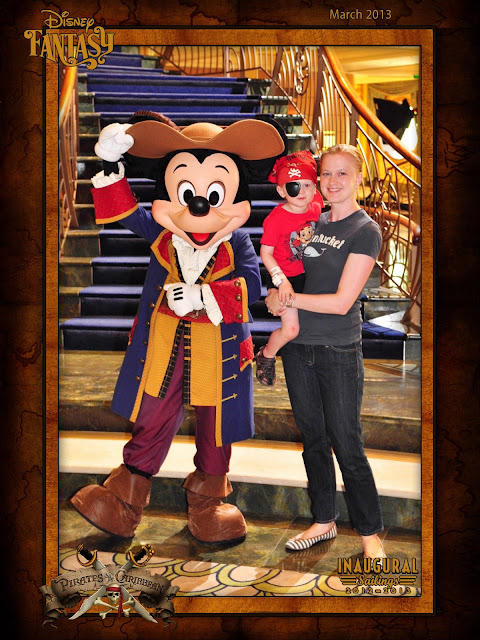 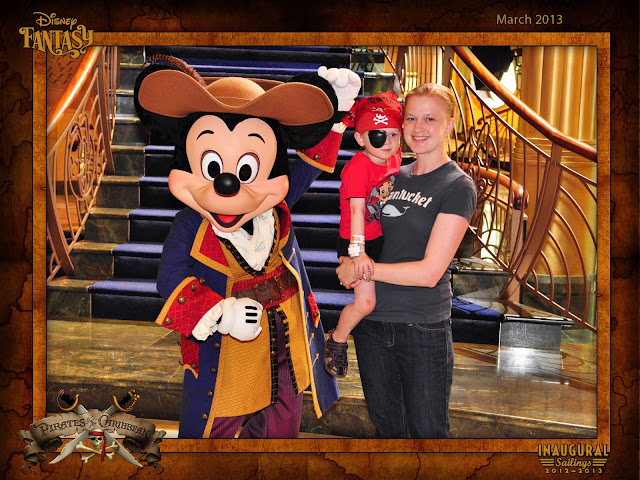 I was glad that Sam tolerated the bandanna being tied onto his head. He can be pretty picky about things like that. Here he is playing with it while we waited in line for Mickey. I brought the eye patch and head wrap from our costume box at home. And I made sure that he wore a "Jake and the Neverland Pirates" t-shirt that day. See, we dressed up a little more than just the bandannas! Well, Sam did anyway. 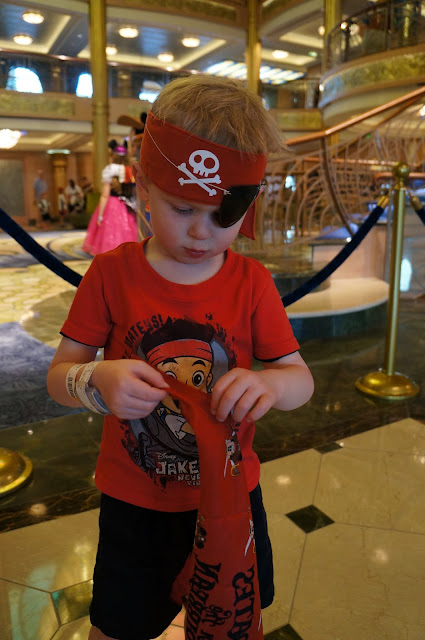 One of the ship's photographers took this picture of us at dinner (again, John wanted to eat dinner in the Kids' Club that evening, the little stinker). I wish I'd been wearing my bandanna in this picture! 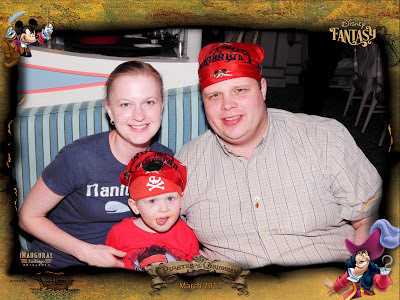 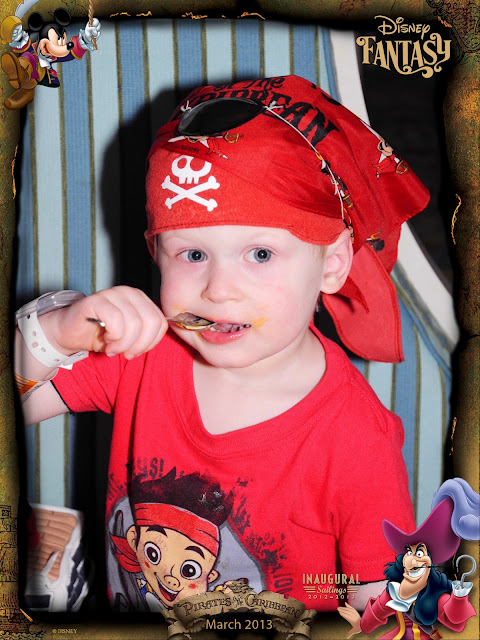 Sam was not interested in posing for the photographer. He was enjoying his mac & cheese too much. He looks a bit like he's saying "Arrr, matey!" here anyway. 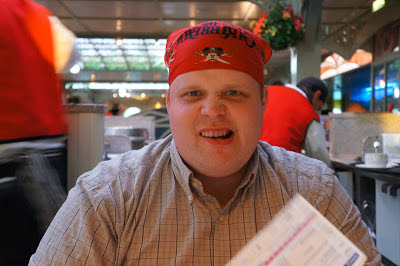 There were two shows on deck. One was earlier in the evening with the Mickey characters and the other one was with actors and Captain Jack Sparrow from the Pirates of the Caribbean movies, just before the fireworks. I liked that they did two shows, one designed more for younger kids and the other for older kids, teens, and adults.

We watched the Mickey show from afar because we got there late, so our view wasn't that great. See the characters on stage? They're blurry and small, but they're bigger on the big screen above the stage. 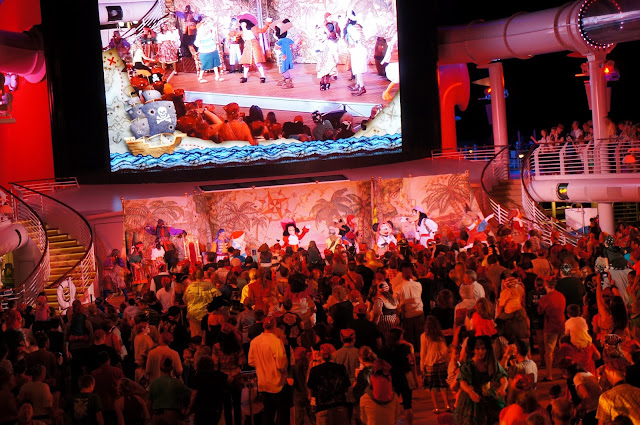 The floor that everyone's standing on is covering the two pools that lie just beneath. 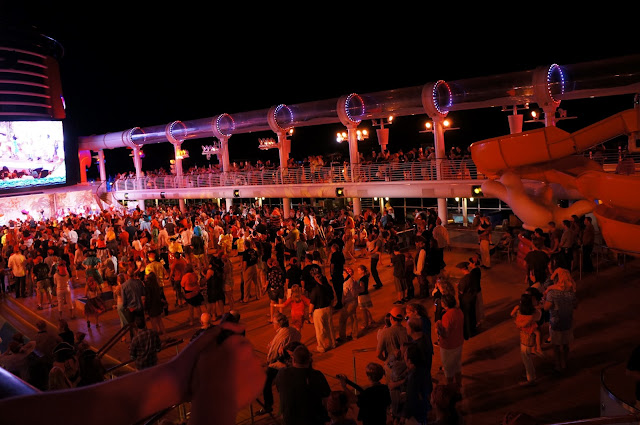 We learned our lesson and got there early for the 10:00 p.m. Pirates in the Caribbean show, so we had a good view of that and of the fireworks, except for a stage-lighting contraption that blocked the view of the sky a bit. I was sitting on the ground holding a sleeping Sam so I couldn't take many pictures. 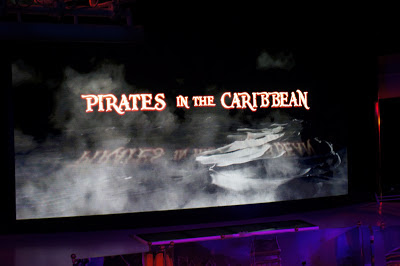 (See the stage-lighting thing in the picture below that's kind of in the way?)
The fireworks show was really good! Much better than what this picture shows. Disney is the only cruise line to have fireworks at sea. 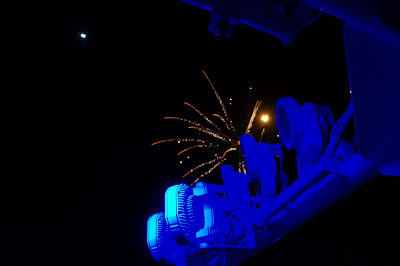 Here's John with his light-up sword and captain's hook. 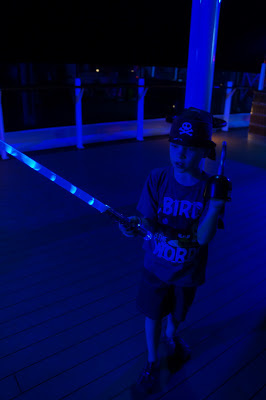 It was a unique and entertaining night, and it was fun to bring out our inner pirate.
Aaarrrr matey!