All Aboard! Setting Sail on the Disney Fantasy 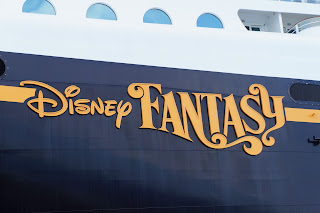 Saturday, March 16th was the day that we'd been waiting for for months. It was finally time to go on our first cruise! We had a car service take us from Orlando to Port Canaveral, which is about an hour's ride. When the ship came into view as it waited in the port, it was pretty exciting. I couldn't believe how massive it was!

The picture below is the first picture I took of the Disney Fantasy, after we'd dropped our luggage off and were making our way inside a building to go through Customs and security. All of these processes, by the way, were very quick and easy. This was our first taste of Disney's impressive skills when it comes to organization, efficiency, and friendliness. A guy who was in line with us said he'd been on many different cruise lines and this was his first time doing a Disney cruise and that he could already tell that it was much better organized than the boarding processes of other cruise lines. (Ahem, Carnival?) 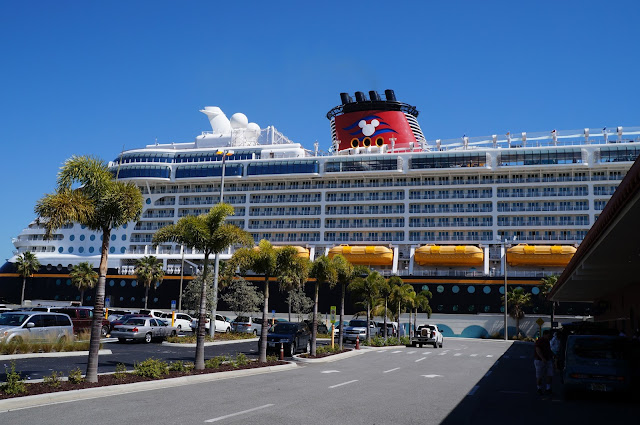 The ship is so big that it almost looked more like a building than a ship!

After we got through Customs and security we went up an escalator to get signed in and registered before we boarded the ship, and we ran right into Mickey Mouse! He was leaving to take a break, but Minnie was taking his place, so we got our first character picture with her (the first of many that week!). Sam was excited about this until it was time to actually meet her, and then he got anxious and slapped her hand when she tried to shake it. That kid. Sometimes I think it's his mission in life to embarrass me! 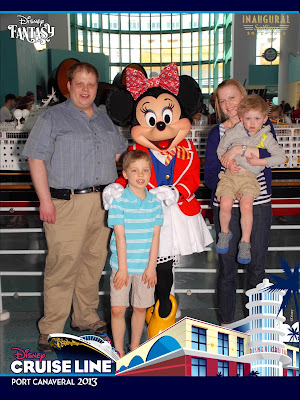 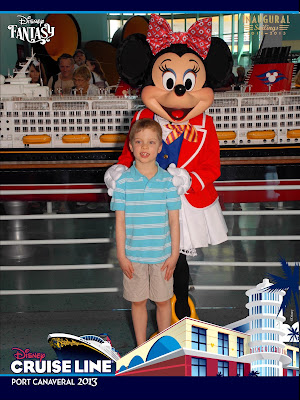 Right before we boarded the ship, they took this picture of us. It was used for our ID cards (a.k.a. "Key to the World" cards) that were swiped at all of the ports we stopped at so that our identities could be verified. 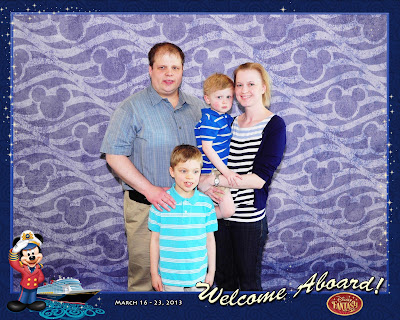 When we boarded the ship, an employee announced our arrival us by shouting something like "Let's give a big welcome to the Carlson family!" and a line of employees applauded as we walked into the grand lobby. They did this for every family that boarded the ship that day (the ship accommodates about 4,000 passengers. That's a lot of people to cheer for!). It was nice to be recognized in a special way like that. The Disney magic had officially begun! 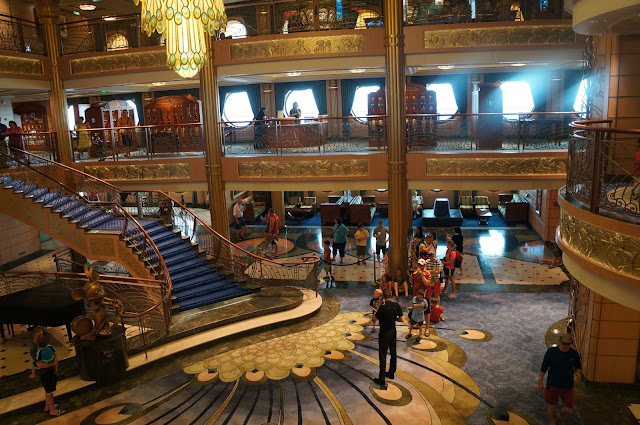 The interior of the ship was gorgeous. I loved its design and style. It's Disney's newest ship and it just started sailing a year ago. It's in immaculate condition and has many beautiful features. I'll post pictures about it in another blog post soon.

We went to the "Sail Away" deck party up on the pool deck that afternoon when the ship left the port and sailed away. Disney sure does know how to celebrate! 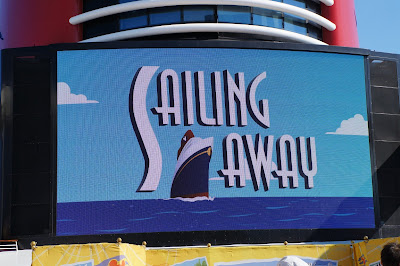 This is a huge movie screen that's positioned above one of the pools so that you can watch movies while you're swimming or lounging by the pool. This was one of Peter's favorite things to do at night when the pools weren't crowded and the night breeze off the Caribbean felt so nice. 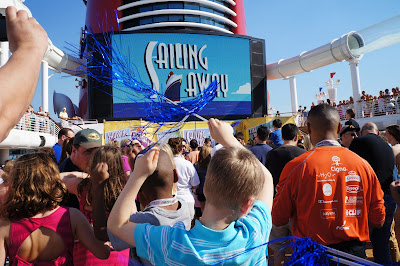 There's John in front of me, living it up! 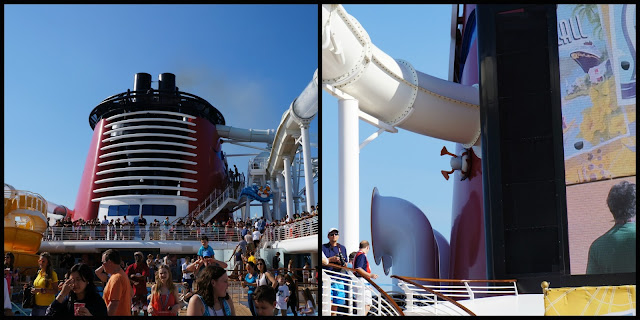 I knew that one of my biggest challenges on this cruise was going to be finding my way around the ship. I'm a directionally challenged person, and not to be redundant or anything, but this ship was huge! I went on a walking tour of the ship on Sunday and that helped me to get my bearings. (I was the youngest person in the group. I make a good 32-year-old elderly person!) It took me pretty much the whole week to figure out the fore, aft, starboard, and port sides of the ship and to be able to determine which side we were on at any given moment. I was pretty proud of myself when I did get it all figured out. But then on our last full day I realized that what I'd thought was the front of the ship was really the back! How could I have gotten that wrong? So confusing! Oh well. These are my blonde moments and I freely confess to them.

Here's the FRONT of the ship, also known as the fore. 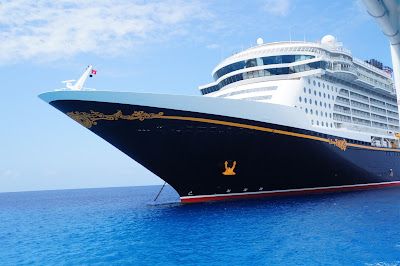 This is the BACK of the ship, otherwise known as the aft. It's Dumbo who brings up the rear. If only I'd realized that from the beginning, maybe I wouldn't have been such a dumbo myself! 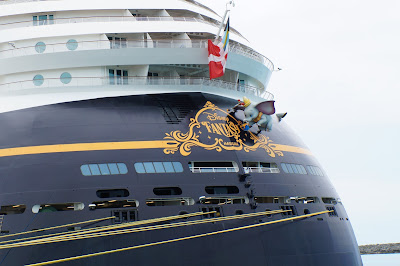 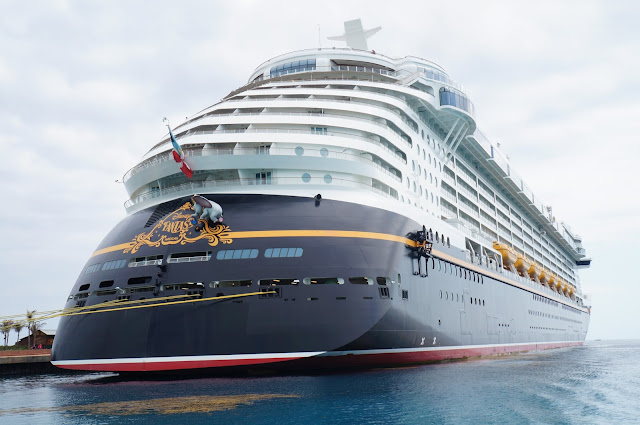 And here's everything in between! At least from the outside. 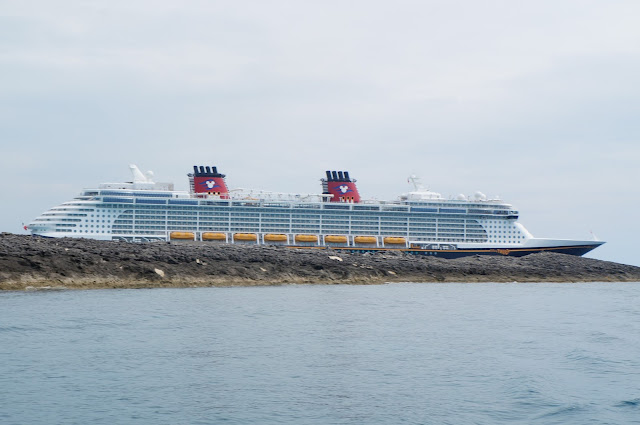 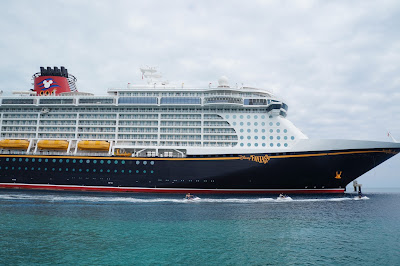 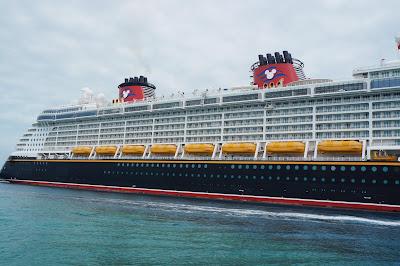 The next cruise-related post will be about our stateroom (which was "practically perfect in every way"!) and I'll give you my own little walking tour of some of the cool things on board.