1. I saw the coolest thing in the woods behind our backyard yesterday. There was a little deer running fast through the brush, which was odd because usually they meander around kind of slowly. Then about three seconds later, I saw why it was running. It was being chased by what I believe was a white coyote! I only caught a quick glimpse of it before they both disappeared from view. I've only ever seen things like that on TV documentaries. It was so neat to see it in real life! Those things really do happen! I hope the little deer got away. I think its chances of escape were good; deer are faster than coyotes, aren't they?

2. Tomorrow a friend of ours from college is getting married in Philadelphia at Penn's Museum of Archaeology and Anthropology (he, me, and Peter are all Penn alumni). It's the first black tie wedding we've ever been invited to. I wanted to go so much! I'd love to be back at Penn in the springtime with Peter and go to a fancy wedding and see some old friends. But the kids made it difficult to make the trip, so we had to decline. So tomorrow my heart will be in Philadelphia. Or wishing it were there, anyway, all dressed up in a lovely black-tie dress.

3.  There are no pictures in this post yet, so here's one. 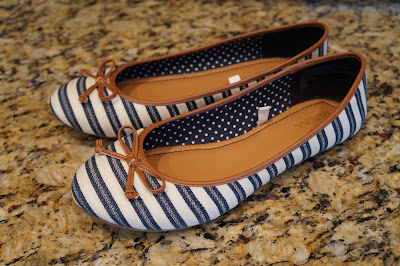 I bought these flats for the cruise. Their nautical-type stripes inspired me. Aren't they cute!?

4. After eating most of my Easter candy over the last ten days, I've come to the rather sad realization that sometimes I eat too much sugar. I want to stop doing that. Overall I have good nutrition habits: I try to limit meat consumption to 2-3 times a week, I don't buy a lot of processed foods, I rarely drink soda, I buy organic produce. But sugar, particularly chocolate, is my Achilles heel. Too much is not good for me. Sometimes it gives me headaches. Sometimes it makes me tired. I'm afraid it's going to turn on my cancer genes. (Maybe my dad got to me after all. That and common sense. And the PBS shows about health and nutrition that I've been watching.) I'm not going to cut sugar out of my diet completely (never!) but I'm going to start limiting my daily treats a lot more. I've got to learn to snack on fruits and vegetables and nuts more. I'm a healthy person but I know that I'd be healthier if I did this. So I'm going to do it. And I'm gonna like it!! 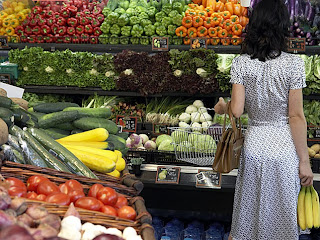 5. The weather turned cold and rainy this week. The rain I don't mind so much, but the cold temperatures are just not funny anymore! This kind of weather makes me want to curl up and take a nap every afternoon. At least the grass is getting greener and buds are starting to pop up out of the ground...as long as the cold doesn't kill them first!


I hope you have a great weekend! I hope I do too, even though I'll be in Iowa and not Philadelphia. :-)