1. I've been preoccupied by two things this week: Pinterest and Downton Abbey.

First, Pinterest. I love it! I get up in the morning thinking "I wonder what new things I'll find and pin today!" I seriously do! (Do I need help?) I'm sure that will wear off since this was my first week using it, but I'm really happy that I've found a place full of good ideas that is so easy and pleasant to use. I found a bunch of good things this week, and these are three of my faves (editorial restraint in effect!):


2. The second thing that's been keeping me preoccupied this week is Downton Abbey. I really do love this show, and it keeps getting better and better. And for some reason it's been in the news a lot this week. First there was a good article about its popularity. And then I saw this article about what the actors look like in real life. And finally there's this article with great book ideas of what to read once Season 2 ends until Season 3 begins (next winter!). And there was a hilarious video that had me cracking up all week that was a spoof from Saturday Night Live of the show for Spike TV. I was going to post it on here because it's really funny, but yesterday NBC removed the video from everywhere because of copyright issues. Bummer! If/when they put it back up again I'll post the video. 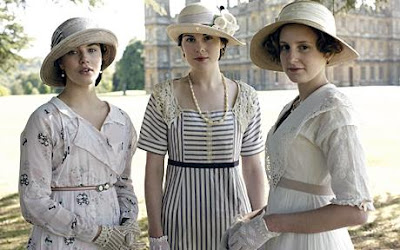 3. A quick political note: I chose my pick for the Republican team weeks ago--Romney-Santorum. I still think that's the best choice. Romney is a strong leader who is electable because independents like him and he's proven that he can work effectively with Democrats, and Santorum is the Washington insider who seems to be a genuinely nice guy, and the bigots people who won't vote for Romney because of his religion will be more likely to support him with Santorum on the ticket, as well as those who don't think Romney is conservative enough. I think that this could be the winning combination. And despite Santorum's sweep of three states on Tuesday, Romney-Santorum is my prediction for what will end up happening. You heard it hear first! 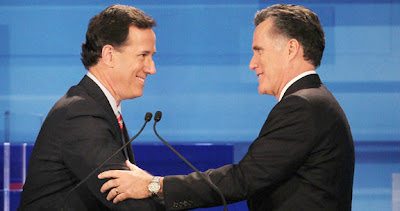 4. I'm sorry, #4 isn't lighthearted or fun, but it will be quick. I won't ever support Planned Parenthood. Ever. They may do some good things for women but that doesn't change the fact that I think it's a horrid organization that does some really reprehensible things. This op-ed piece from The Wall Street Journal explains why I feel this way.

5. On a lighter note, last Saturday night I indulged in the best bath I've had in a long time. I took a totally relaxing bubble bath with the jacuzzi jets going and my head resting on a soft bath pillow, and soon after when I got into bed I felt like I literally melted peacefully right into a good night's sleep. It was so nice!


So those were some of the things that made up my week. I hope your week had good things in it too!
Posted by Donna at 9:30 AM