Off With Their Heads!

Sometimes Sam, my two-year-old, throws things. Sometimes they're things that aren't supposed to be thrown; recently, it was one of my Willow Tree figurines, which isn't the first time that's happened, but it was the first time that serious damage was sustained in the form of a perfectly executed double beheading. 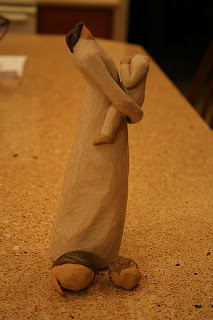 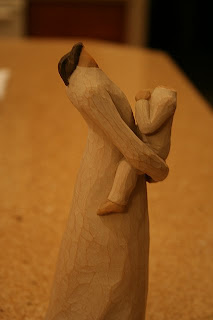 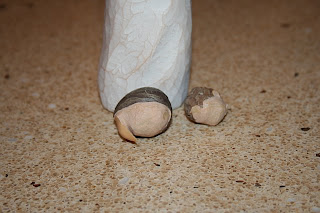 Ironically, the name of this figurine is "Tenderness" and it's a mother and her little boy enjoying a special tender moment, the kind of moments that I love having with my own little boy. But now that Sam has done his little boy thing to it, maybe it should be re-named "Reality" instead. Ha!

Fortunately, I was able to glue the heads back on, and now this sweet statuette is safely positioned out of reach up high on a bookshelf. If you look closely you can see the cracks from their beheading, but all is well again. If anything, the mother's and boy's heads are closer together now than they were before. There must be a lesson in that. (What doesn't kill you only makes you closer?) 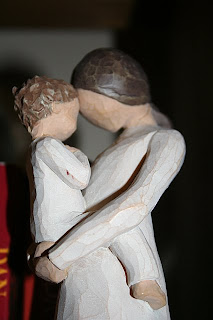 Actually, I think this incident sums up motherhood and life in general very well. There are moments of tenderness and contentment and there are also difficult times with problems that need to be worked on and fixed, but a little love and patience (and super-glue) can fix just about anything and bring the tender loving moments back and can make you stronger and closer in the process.

Wow. That was deep!