I'd been debating for awhile about whether or not to get a train table for the kids for Christmas. On the one hand, Sam really loves trains right now and whenever we go to a place with a train table, both he and John really enjoy playing with it. 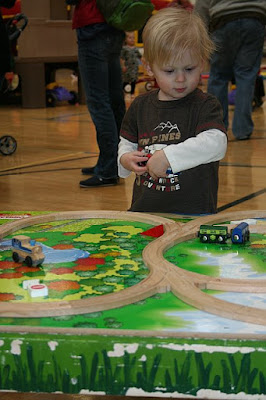 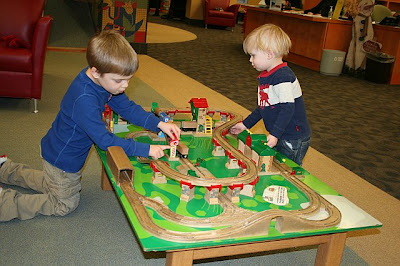 On the other hand, I was worried that train tables would lose their novelty if we had one of our own. Plus, it would take up a good amount of space, I'd already pretty much finished Christmas shopping for the boys, and we don't need to own everything that they happen to like. But fate seemed to step in when I randomly went to a consignment shop for the first time to sell some things, and I happened to see a train table in good condition there. I went home and thought about it, and sent Peter later that day to pick it up. Then I bought a train track set on amazon, we set it up on Christmas Eve after the boys went to bed, and voila! Our own train table. 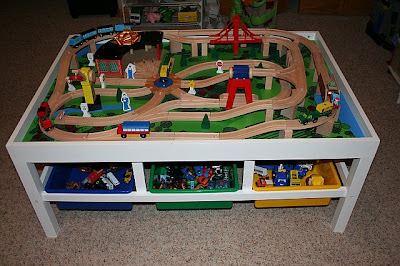 Sam and John were pretty excited about it on Christmas morning. Especially Sam, who's at that fun boy stage where he loves things that go. 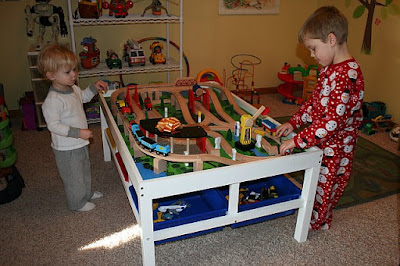 I think it was a good investment. Even if Sam does throw the trains on the ground in frustration when they don't stay on the tracks the way that he wants them to. And even if John has barely played with it again since Christmas! Oh well. It was mainly for Sam anyway. I'm glad we have it!
Posted by Donna at 10:00 AM