A Penny For Your Thoughts

This has been a busy week! I've had something going on every morning and almost every afternoon AND evening. That's a little too much for homebody me! But I got through it mostly fine and even managed to get my house decorated for the holidays in between everything.

We got our Christmas tree last weekend (a beautiful almost 10-foot fragrant Frasier Fir). But when Peter went to string the lights around it, we didn't have enough! (We're doing white lights this year--we have to switch off every other year because Peter likes colored lights and I like white.) So all week the tree has been half-lit with hardly any ornaments on it. Today I'm going to Target to get more lights and this weekend we will do our tree justice and decorate it! 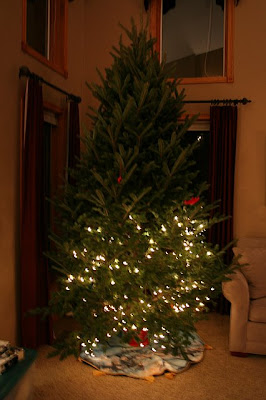 On Cyber Monday I shopped my little heart out online (not really, but kind of) and one of the things I got done was our Christmas cards. I think this is the earliest I've ever gotten them designed and ordered! It usually takes me awhile because I have to decide on which pictures to use and I look at lots of cards on various websites because I'm a perfectionist and want to choose the best one. This time, I kept it simple: I used one website and I chose only from pictures from our family photo shoot this fall. That made it a lot easier! The cards should arrive today or tomorrow and I'm going to address them this weekend and send them on their merry way early next week. That's definitely a record for me!

As of this week, I'm officially a member of Mitt Romney's campaign volunteer team in Iowa. His Iowa Field Director got in touch with me and I had a good conversation with him about what I could do to help out. I'm going to be a part of the Iowa Caucus on January 3rd, which I'm excited about! I love politics (for some strange reason) and this is one of the things I was looking forward to about living here!
I'm a long-time supporter of Romney, not because he's handsome, rich, and successful (although those things certainly don't hurt!), but because I know the Romneys from living in Massachusetts when I was in high-school (they were in my (LDS) stake) and I have long thought that he's a really smart, strong leader and a genuinely good person. I think he was a very effective governor of good old liberal Massachusetts (not an easy feat for a Republican) and that he would also be an effective President for this polarized nation. I like that he's more of a centrist and not a strict conservative about everything. I think that's an asset right now. So that's why I'm volunteering for him. Go Mitt!!

And speaking of politics and presidential candidates, just a few other quick thoughts...I think it's sad that Herman Cain has so much promise and potential ability to help the country but poor choices from his personal life are probably going to prevent that from happening. And Newt Gingrich has made similar poor choices, so why isn't that hurting him as much as it is Cain? Because it was already known? It's weird. In any case, I don't trust either of them. My favorite candidates are Mitt Romney (obviously), Ron Paul, and Rick Santorum.

The European debt crisis continues to worry me and I'm sensing real danger signals for the U.S. According to financial experts that I watch on the news, everything could collapse like a long line of dominoes. I don't think they're sensationalizing the dangers here. Will we go into a deeper recession or even a depression? Will the Stock Market crash? Aaaaggh! Let's hope not.

Did you hear in the news this week that studies are finding that there is potentially dangerous arsenic in some brands of apple juice? Guess what my kids' favorite drink is? Well, at least I always dilute their juice with water. I looked up the ratings and the Juicy Juice brand is apparently safe, so Juicy Juice it is from now on!

My sister Elizabeth is due to have a baby today, but he hasn't arrived yet and isn't showing much sign of being ready to make his way into the world yet. The last time she had a baby he was born a week early, so last week I booked a flight to Boston for a week from today, thinking that the baby for sure would be born by then. It's going to be problematic if I go out there and he hasn't been born yet! So I'm hoping he will arrive in the next few days so that I can meet him next weekend and hold him a lot. I LOVE newborns, especially when I'm related to them!

I hope you have a great weekend!
Posted by Donna at 9:00 AM