This is an update on the ongoing saga of my hair and my quest to restore its health and get it to grow down to my shoulders again. This week I found a file of my husband's cell phone pictures on the computer that he must have recently uploaded, and this was one of the pictures: 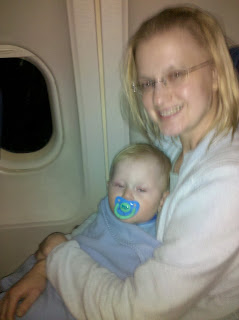 This is a fuzzy not-very-good picture of Sam and I on a plane at night last year, but the thing about it that gets me is my hair! It was shiny and healthy and at my shoulders, and I wish I had it back again now! Little did I know that by the end of that year it would be breaking off on one side and would have to be cut a few inches shorter because of the damage apparently caused by some bleach-filled highlights that I got when I moved to Iowa, a situation that I'm still dealing with now almost a year later. This picture was taken on the way back to Boston from Iowa when we were house-hunting. If my hair could talk, it would have been saying "Donna, proceed with caution! Don't get the highlights when you move to Iowa!!"

The following pictures were taken just last year too, on St. Patrick's Day when we still lived in Connecticut. The healthy, desirable state of my hair just kills me now. 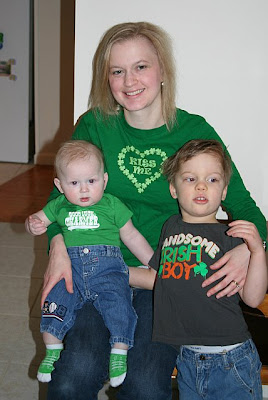 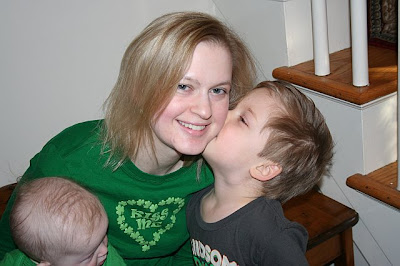 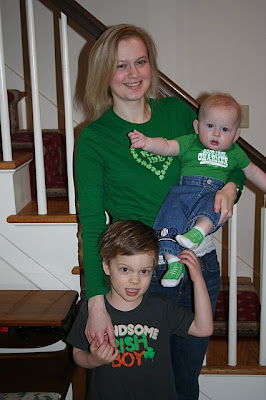 This is making me a little sad, but also hopeful that if my hair looked like that just last year, it can look like that again! I've decided that if my hair hasn't gotten a lot better by next summer, I'm going to book an appointment with my wonderful former hairstylist in Connecticut when I go back East next summer and see if she can work some of her magic. She's the one who helped my hair get to the above state. (And I know this isn't that remarkable compared with other people's hair, but for me, it was really good!)

Another factor is the baby. A few months after having Sam, my hair looked like this. Maybe having another baby is what I need to do to restore my hair to its former, uh, beauty. Seriously! And if it's a boy I'll name him "Harry." (Not seriously!) Anyway, I think it's funny and ironic that I'm envious of the hair I used to have when I didn't really appreciate it all that much when I did have it.

Thank you for reading another one of my laments about my hair. There will probably be more of them because I'm vain enough that I won't give up on this. My hair will eventually triumph!! (Insert Rocky theme here.)
Posted by Donna at 12:30 PM