Nancy Pelosi Cracks Me Up! 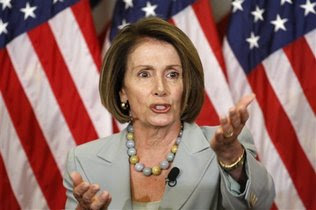 Did you watch President Obama's national healthcare speech last Wednesday night? I had it on, and there was an unexpected and very unusual moment of suprise when Representative Joe Wilson shouted "You lie!" during the President's address. I've never seen anything like that happen before, and I couldn't believe he did that! It was rude and disrespectful, and it's good that he apologized for his outburst the next day.
But I have to admit, I got a kick out of Nancy Pelosi's reaction. As the House Speaker, she was sitting directly behind the President, so you could see her the whole time during the speech. When Wilson yelled out, first she appeared to be shocked and completely taken aback, and then she looked totally ticked off. She looked like she wanted to leap out of her chair and whack that guy on the head with her gavel. It reminded me of the expression I sometimes see on mother's faces when one of their kids does something appalling and they want to punish them right there on the spot (I know this expression has been on my face before!). It was funny to be reminded of that in a most unexpected setting. Nancy Pelosi, you crack me up!
Posted by Donna at 3:45 PM