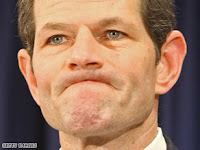 (Beware readers: get ready for a rant!)
I've been pretty disillusioned and disheartened by the Eliot Spitzer scandal this week. Not only because this man who had a huge amount of responsibility to the public has been breaking the law, being a total hypocrite since he spent his career going after all sorts of "law breakers" from Wall Street to...prostitution rings, but also because of how he's been breaking the law for what looks like years. Prostitution is one of the most morally reprehensible acts imaginable, and prostitutes themselves are a scourge to society. The pathetic women who do this ruin not only their own lives but also the lives of countless others, all for money. Why can't they use their brains and not their bodies like most other people do to make a living? Because they're dumb? Poor? Abused? On drugs? I don't care for their reasons; it's inexcusable. I also get peeved when they're called "call girls," trying to make it sound more classy and polite, when they are just prostitutes and hookers, engaging in the act of prostitution, which is paying for sex with a stranger, plain and simple. It's disgusting but not surprising that Spitzer's hooker is getting so much publicity now and will be able to make some serious money from her few minutes of fame. The public rewards despicable behavior with a level of attention that is evidence of how twisted the interests of people have become. And because I can't leave the paying customers out of this rant, I can't stand the heartless jerks who use prostitutes and keep them in business. Spitzer is forever disgraced, at least in the public eye, and has set such a bad example for Americans.

Another thing along these lines that has been bugging me is the hugely offensive Fox show "Moment of Truth." I've never watched it and I certainly never will, but I unfortunately see the ads for this show when I watch "American Idol," and I'm shocked that Fox shamelessly puts a terrible show like this out. So entertainment in America now involves watching silly selfish people answering way-too personal and totally inappropriate questions on national TV and ruining their relationships with their families as a result. What clearer proof is there than this that Satan is truly launching a massive assault on the institution of the family? Our society and the diet it feeds itself on seem to decay more and more with each passing day, and that's very bad news for America.

One last thing...have you heard about the new study that finds that a lot of teen girls have STDs? 1 in 4 girls, in fact. How sad is that? This is troublesome for a variety of reasons. For me to even say that teenagers shouldn't be sexually active in the first place, not until they get married, sounds so old-fashioned to most people now, but it's true, no matter what their religion or lack thereof, they shouldn't be doing it. Our morals have fallen so low in this country that it's now a pretty much accepted and expected thing for teenagers to be having sex. And look what it's leading to...STDs, which can lead to infertility and cancer, among other things...which can lead to the loss of very important opportunities (like having children), and even death. Families may never be created as a result and lives may be cut short. Both spiritual and physical death can and will and do result from this careless moral behavior.

If ever I wanted proof to back up the claims of the scriptures and doctrines that I am fortunate enough to have knowledge of, this is it. Wickedness never was happiness, and it never will be, and the proof of this is all around us, as the above three examples show. It is a worrisome thing to watch our culture spiral downward; it does not indicate good things about where we as a people are headed, and the effects of this cultural and societal decay on countless people is going to be devastating. It makes me angry that it's going to be even harder for me as a parent to teach my son about how to live a good life and make the right choices when the bad decisions of others are collectively going to make what I need to teach him seem less credible and more difficult to understand. Usually I'm more optimistic than I am here, but this morality stuff is an issue that is such a significant problem that it's hard to feel anything but pessimistic anger over it sometimes.
Posted by Donna at 11:12 PM