The Cause of Our Recent Woes 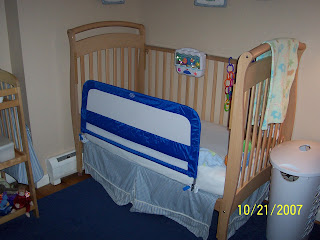 That's right. The subject matter of this innocent looking picture has been a scourge in my life recently. Two weeks ago we took the rail off of John's crib and put on a bed rail because he's getting old enough to start the conversion process over to a real bed. He adjusted well to it and loved being able to get out of the bed instead of being trapped inside. But that is where our troubles began.

The first few nights he slept fine. Then he figured out that he really could get up whenever he wanted, even if it was pitch dark outside, and I started getting a little bedside visitor in the early-morning hours. First it started in the 6:00 hour, then the 5:00 hour, and the absolute worst was the 4:00 hour. Being too tired to get up and put him back in his bed and listen to him cry (or having to repeat the process when he'd just come in to our room again), I let him into bed and we snuggled up together, which was nice, but not at all sleep-inducing, especially since John would usually not go back to sleep, so I wouldn't be able to either.

The result was that for about a week straight I was so sleep-deprived. John was too, but it didn't seem to bother him as much. I, on the other hand, got massive headaches and lost all productivity and sense of normalcy, scheduling, and organization that I usually have. It is amazing what a lack of sleep will do to a person. It was like revisiting the newborn Baby John days again, only this time it was much worse than that ever was. My life was in chaos!

If you're wondering about Peter, he is a heavy sleeper, so this didn't affect him as much. Plus, my side of the bed is closer to the door so John came over to me. He also probably knows that I'm more of a softy than Peter. Anyway, despite all of that, it wasn't helping Peter either, and we decided that this had to stop. After all, we're the parents, and we shouldn't let the course of our lives be totally dictated by our child, right?

So we decided to close his bedroom door at night before we went to bed so that he couldn't leave his room when he got up. We did this for the first time a few nights ago, and John woke up at around 4:30 a.m. crying because now he was trapped in his room, so Peter went in and put him back to bed (he's much better at that than me) and closed the door again when he left. John cried some more but then went back to sleep. And ever since then, it hasn't been a problem! We just make sure his door is closed before we go to bed at night. When I go in to get him in the morning, his room is a disaster area--I have no idea what time he's getting up to play, but at least he's staying quiet and letting me get some much-needed sleep. Life is good again!
Posted by Donna at 11:25 PM