The Pets in December (Emergency Included)

There were traumas and miracles that happened in December with one of the pets. And of course some classic Christmas cuteness with both of them. Read on...

I continued to enjoy photographing Violet cuddled up on the couch. 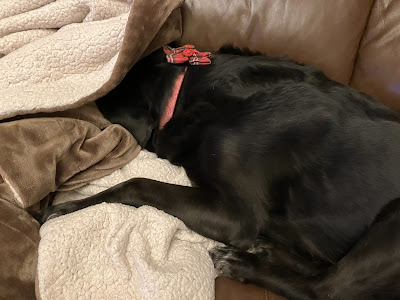 I definitely feel like doing this some days!
Bentwood resumed his favorite resting spot once the tree was up. He has good taste! 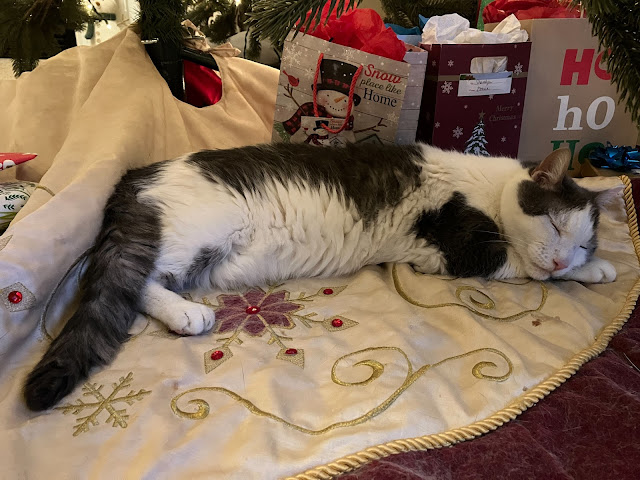 The rest of the year when the tree isn't up, Bentwood likes to lay on this little blanket bed near the TV. Violet sometimes curls up on it, which I think is funny. She's doing that here while Bentwood relaxes under the tree. They're so cute! 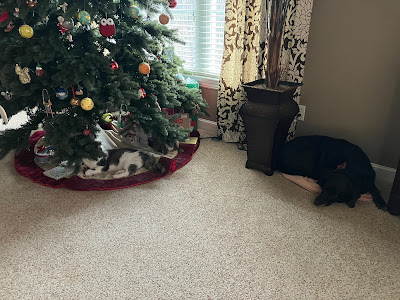 Here's Violet bundled up on a blanket, nice and cozy! I wouldn't let her do this if she smelled like a dog (which would be understandable, ha ha), but most of the time she's scentless, so I let her. 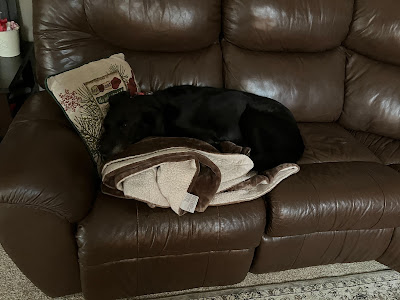 Cuddling amongst the Christmas pillows 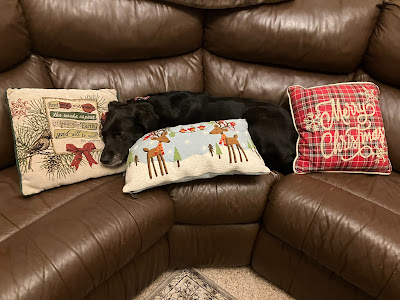 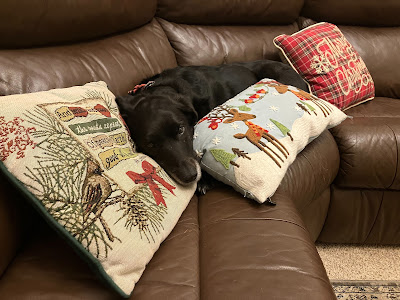 Here's where the emergency comes in. In the early evening of Saturday, December 17th, I heard Bentwood meowing loudly down in the basement where his food and kitty litter are. I went down to check on him, and he was struggling to breathe and was panting very loudly and dragging himself around on his front legs. His back legs seemed to be paralyzed. It was shocking because he'd been fine before this, and I had no idea where this was coming from. It was so upsetting. I called the vet hospital and they said to bring him right in, which I did.
He almost went into cardiac arrest and died there as I quietly sobbed in the waiting room, but they were able to stabilize him after he spent some time in an oxygen tank. But before that fully happened, they thought there was likely a major problem with his heart, and the vet gave me the option of putting him down as a humane thing to do given his age as well as the potential seriousness of the problem and the expense of treating it. I was so upset. I've never had to do that with any of my pets--they've all died on their own--plus I was dealing with the shock of this happening in the first place since he'd been doing fine. It's times like these when I really miss having a husband for support. The vet kept asking me if I had anyone I could call to talk the options over with. My mom was at a Christmas party and wouldn't have her phone on, so I called my sister Jennifer, who gave me really good advice that I followed and I'm so thankful that I did.
I decided to give Bentwood a chance to recover. It's a really good thing I did because he survived and ended up having a good recovery! The vets were surprised by this. It ended up not being as serious as they thought--it wasn't even a heart problem! It was related to his diabetes. Unbeknownst to me, his insulin needs were changing, and his blood sugar had gotten really low and he had gone into hypoglycemic shock. This is an entirely fixable, treatable thing if it's caught soon enough, which it barely was for Bent. Can you imagine if I'd had him put down when that's all it was? I don't mean to say that's "all" it was because it is serious and we're still trying to figure out his insulin needs, and he had to go back to the vet E.R. a few days later for a similar incident. But now, three weeks later, he's doing well and is mostly back to normal. I haven't had to give him insulin in over a week and he may be going into remission from diabetes.

I'm so thankful he's okay and that I have more time with him. I'm thankful that he was delivered from death's door (I think he was literally at the threshold) a week before Christmas Eve, and that a little Christmas miracle occurred with him being home and recovering instead of us mourning his loss during the holidays. I don't like to bring money into it, but it did cost me a lot of money, money that in the past wouldn't have been a problem, but it is now. But I'm making it work, and I feel that it was very much worth it.
This was him on the day I brought him home. Violet was happy to see her little buddy again after he was gone for a few days. 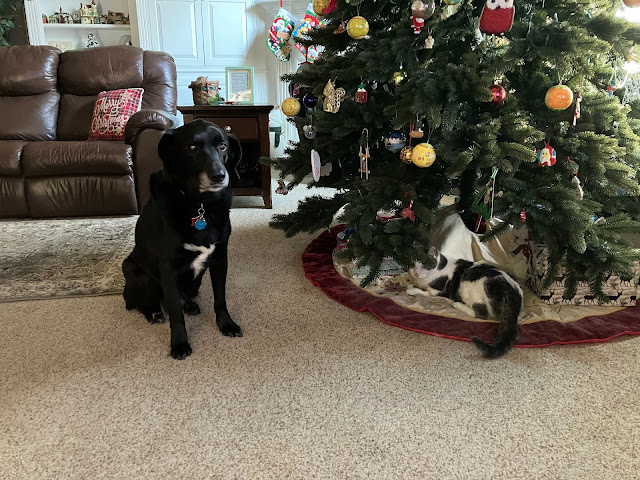 He was very frail for awhile and I had to give him IV fluids for a few days, which I didn't enjoy administering, but I did it for my boy Bent! 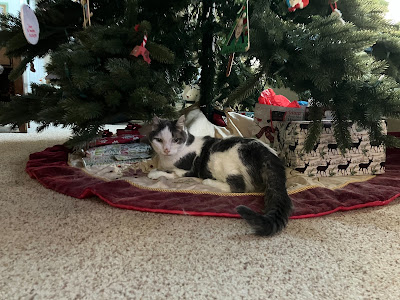 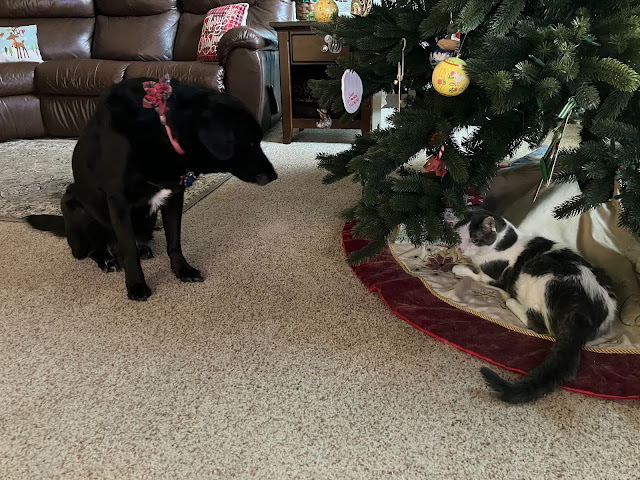 We've had Bentwood since 2006, a few months after John turned 1. Bent was there for the last four years of my dog Christy's life, who I got when I was 14 years old. Think of that! Bentwood is my living animal connection to my beloved dog that I got at the age of 14! I'm 42 now. Wow! He's also our living connection to Brody, Yogi, and Boo Boo. I love that about him. 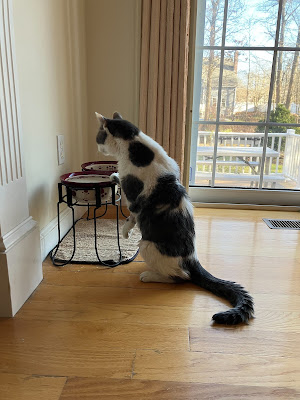 Here was Violet on Christmas Eve. She didn't help with anything, she's so lazy. 😄 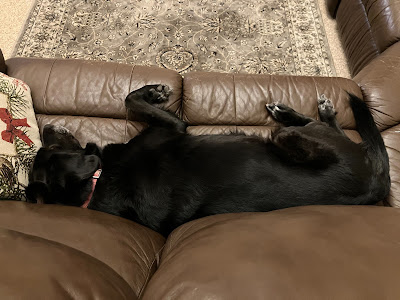 Violet on Christmas afternoon. I tucked her in. 😁 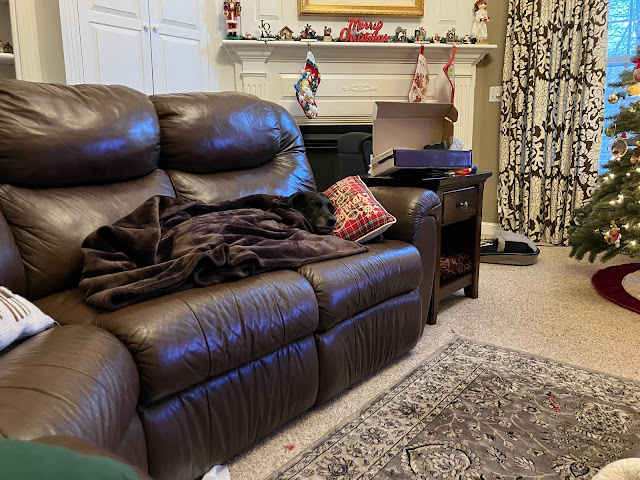 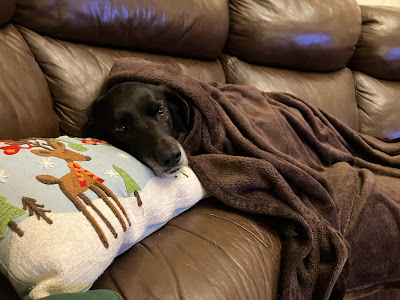 Since his ordeal Bentwood has been spending most of his time sleeping down in the basement storage room. He hasn't been coming upstairs on his own to lay under the tree or on his blanket bed, and I miss that. I think he was exhausted after almost dying. Understandable. 😉 I hope he'll start coming upstairs again more soon, but whatever he wants to do is fine with me at this point. 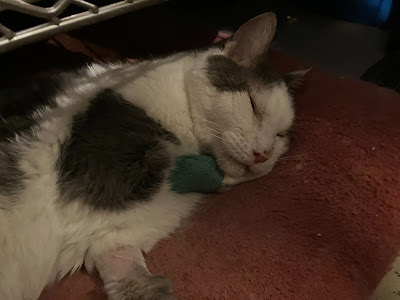 This is his new favorite place to rest, under the shelf of food storage cans. Not quite as picturesque as under the Christmas tree! 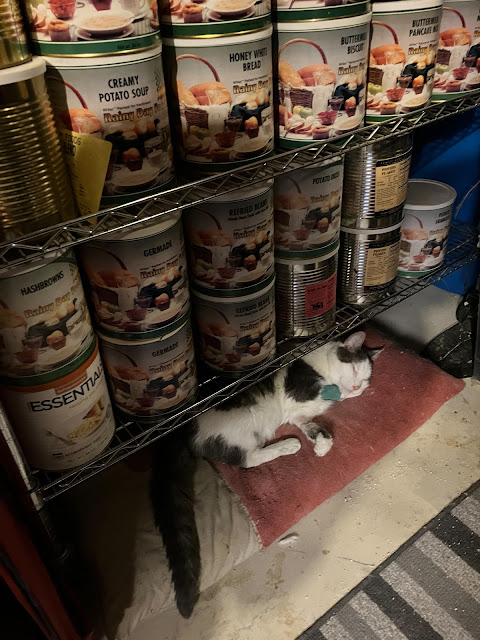 Merry Christmas! If I remember and it fits, maybe I'll use this as one of the pictures on next year's Christmas card! 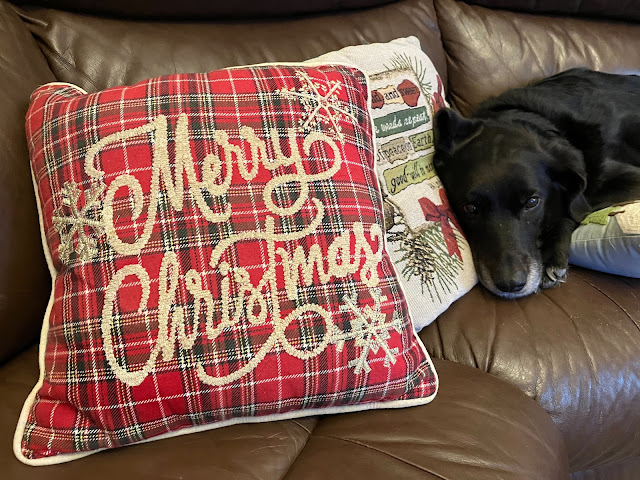 It was an eventful month with the pets! I'm hoping this month will be far less eventful. So far, so good! 🤞
Posted by Donna at 10:44 AM