Overnight at the Lizzie Borden House!

For Rocco's birthday gift, Elizabeth rented out the three rooms on the top floor of the Lizzie Borden house and we spent the night there ("we" being Liz, Rocco, me, Jennifer (our sister), Nate (our brother), Kat (Nate's fiancee), and Liz's boyfriend). This is one of the most haunted houses in the country, where numerous ghost investigations for TV shows have happened over the years, and while we'd all toured the house in the past, none of us had ever spent the night. It really was a memorable and fun night! 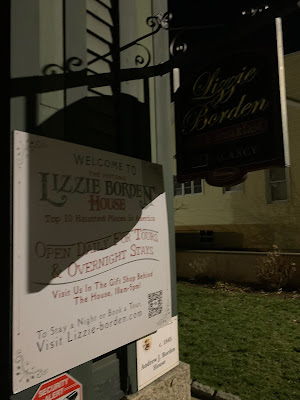 We did a ghost hunt with one of the tour guides at the house from 10 pm-12 am and that was really, really good. There is definitely ghostly activity happening in that house. I'll share the memorable experience that I had: I was sitting on the couch that's in the spot where Andrew Borden was killed, and I suddenly felt a cold spot on my lap that lasted for a few seconds. A few minutes later, I felt it in the front of my legs. It was too random and sudden and specific to have been a draft. Perhaps it was the ghost of a child who sat down on my lap and then later sat on the floor and leaned up against my legs. The house is known to be visited by the spirits of children, likely the two children who lived next door and were killed (by their mother 😢).

This is the room that Jennifer and I shared. I'm happy to report that we didn't have anything spooky happen to us there during the night! 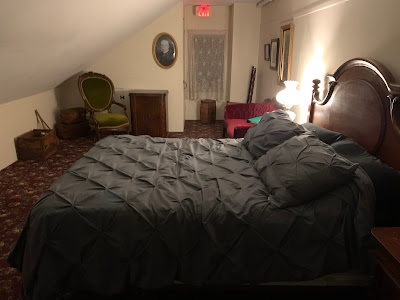 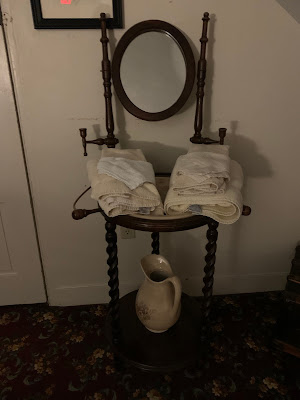 Our bedroom was the "Andrew Jennings Room," named after Lizzie's defense lawyer. He did a good job defending her since she was found innocent when I'm 99% sure she was guilty of being involved. 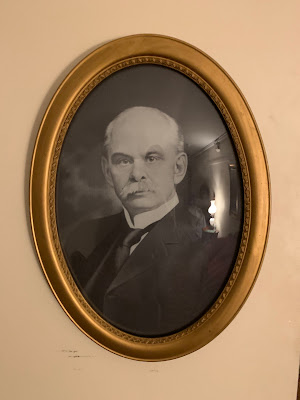 We found a creepy doll in the room that Nate and Kat stayed in. 😨 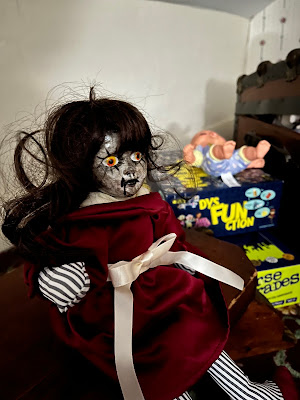 Me and Jen and the creepy doll 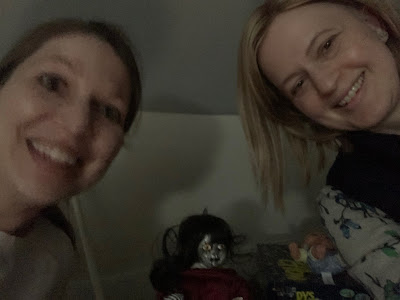 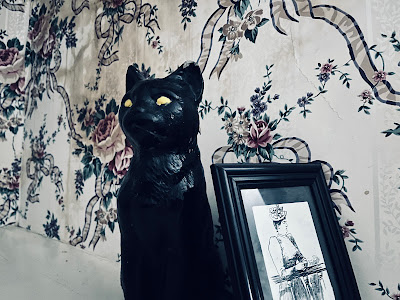 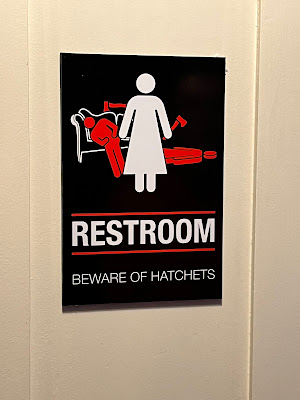 This is the back of the house. We were up on the top floor. 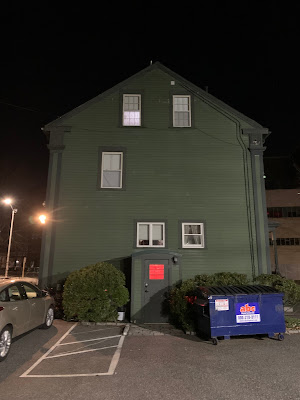 In the kitchen (stating the obvious). This is where our delicious breakfast was cooked in the morning. 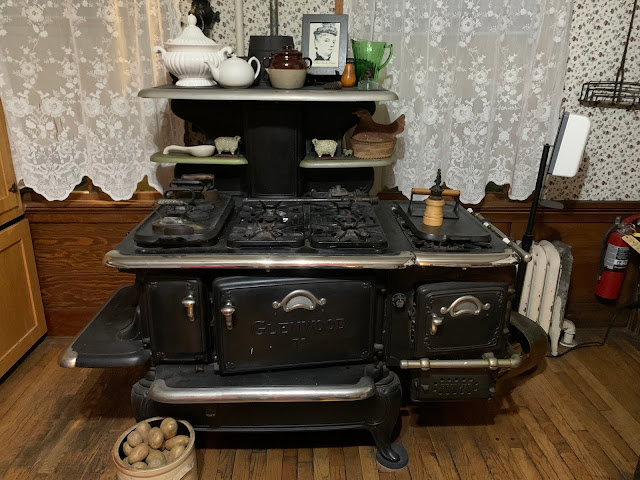 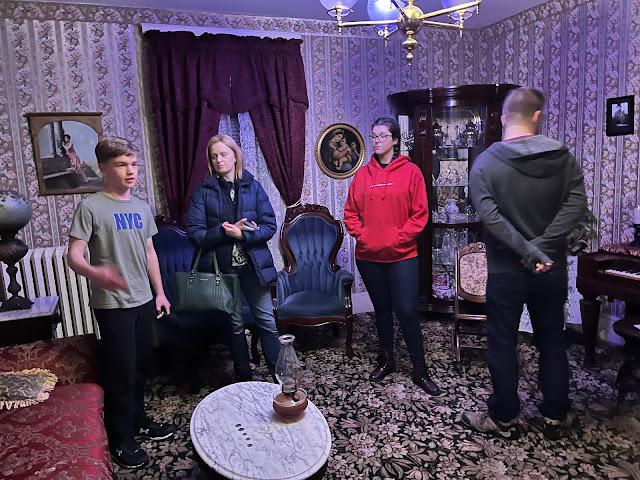 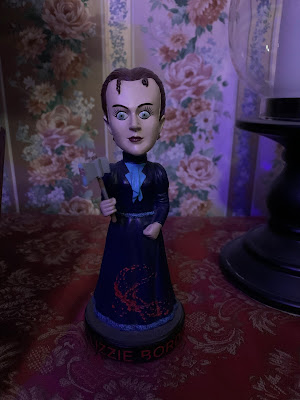 Do you see the woman's face on the wall? This is down in the basement, and it's so bizarre! 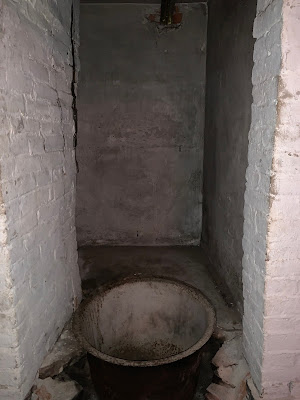 A hatchet in the basement, complete with red uplighting. 😯 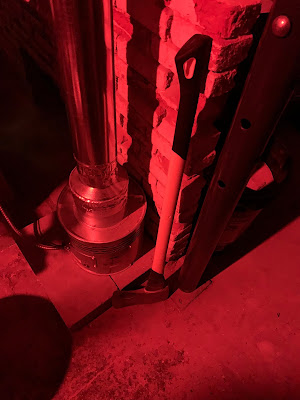 This is also down in the basement, directly below the spot where Andrew Borden was killed. His blood leaked into the floorboards and the bloodstains can still be seen in the wood. As fun as it is to investigate the house, what happened to him and his wife was tragic and evil. 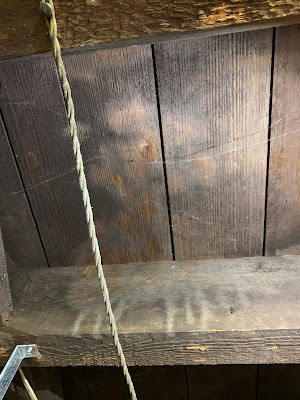 Pretty lace curtains lit up by the sun in the morning 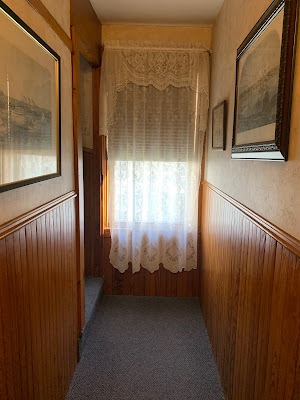 The stairwell up to the third floor is unique because of this door that can open and close over it. This is how it was set up when the Bordens lived here. It's weird (and creepy) that you could be locked up there with no way to get out. Unless you chopped through the door with a hatchet. Ba-dum-dum. 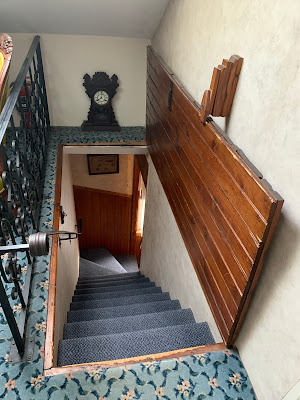 The third floor sitting room, where we sat. 😄 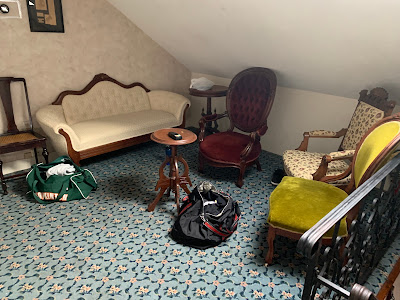 I really enjoyed our night at the Lizzie Borden House, and I hope to do it again in the future!