Oh What a Night

We had a fairly crazy evening on a Friday night in early September. Sam's friend was sleeping over and they were enjoying night swimming with the pool lights on. So far, so good. 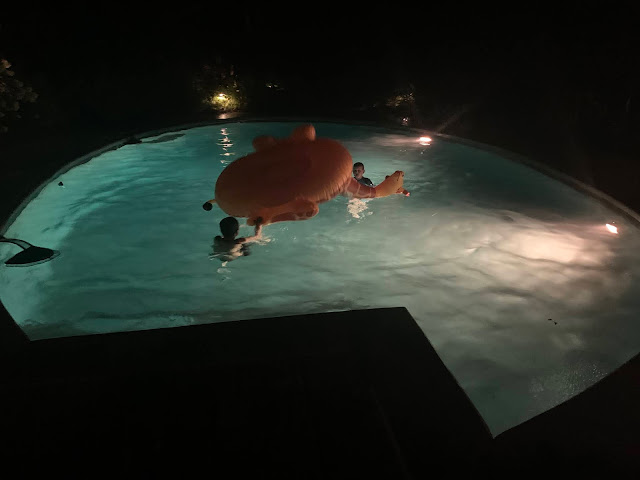 Then I noticed a bunch of huge bees flying around the back porch lights by the sliding glass door. These weren't run-of-the-mill bees--they actually weren't even bees; upon closer inspection from a socially distanced space--not because of Covid, but because of stinging insects 😂--I could tell they were wasps or hornets. Yikes! I didn't know where they came from until I remembered a previous suspicion from months earlier that there might be a little hive of something hiding out in the back porch siding. I don't know what made them come out all of a sudden like that, but there they were.

Then one of them got in the house when I opened and shut the door quickly to go back inside! It was flying all over the kitchen! I didn't know what to do. I started having visions of us all getting stung during the night. I turned off all the lights but kept the porch lights on, so it flew back by the door where the lights and its buddies were. Now the trick was to let it out without letting any of the others in, all while not getting stung. But it wouldn't get close enough to the screen door for me to do that. It did fly onto the glass and then I was able to trap it by opening the sliding glass door all the way over it. 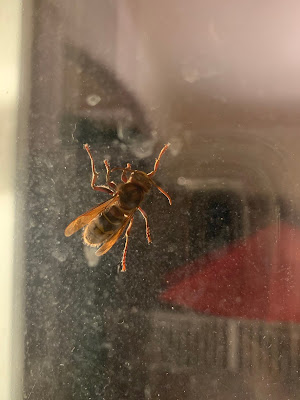 Then I started thinking, we'll have to leave it like this all night, but I didn't like the idea of not having the sliding glass door closed and locked for the night. In the meantime I told Sam and Alex that when they were ready to come in, they needed to go in the other back door away from the hornets/wasps. When I went out to check on them and let them know what was going on, it looked like one of the hornets or some other big bug was struggling in the water! And then a bat swooped down over the pool, presumably to get it, or just to startle the heck out of me even more! It was crazy! 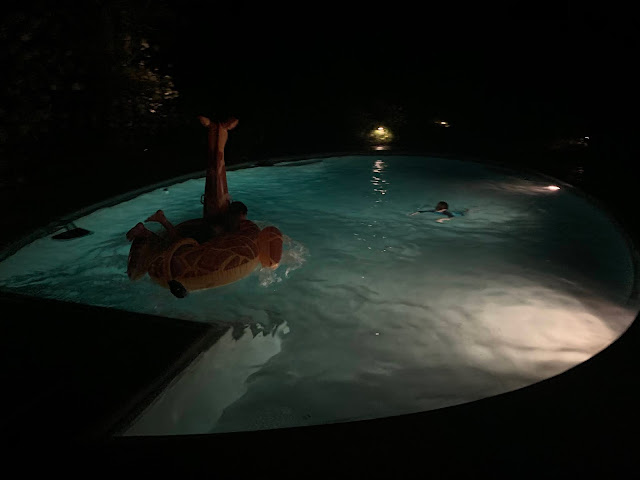 Meanwhile, the hornets seemed to know that their friend was inside and they were trying to get in. Some of them were swarming on the screen door. 😱 They were BIG, bigger than they look in the pictures. 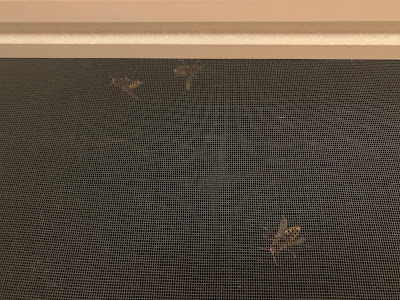 Once the boys were safely inside and upstairs in bed, I had John help me with the trapped hornet. It had fallen down and we couldn't see it. We slowly eased the glass door away and couldn't find it at first, but then we saw it down in the door track. It was weak and struggling, which I felt bad about, but at least that meant it probably wouldn't make a beeline for us (ha ha). We were able to ease it onto a piece of cardstock and quickly deposit it on the back porch. Phew! No stings, and no other hornets got inside. Thank goodness for that! In the morning, it was dead, and so were a couple of the others. They came out for a couple of nights after that, and then they were gone. I'm going to have to get the siding inspected and if there's a nest, get it removed. It's already on the spring to-do list!

It was such a random and weird thing, but I'm glad it ended well (for us, not for the hornet). I'm pretty sure these were European hornets, thanks to a friend of mine on Facebook who was able to identify it.

In case I'd started to wonder, this incident let me know that the malevolent, mischievous spirits of 2020 were alive and well! 😒