1. My hair is getting blonder as I get older. It used to darken up at the roots quite a bit in the winter and it's not doing it nearly as much this year. It also used to be a darker blond throughout the year and now it's a blonder blond. I get some very gentle highlights done at the salon but I only need to do it about twice a year because one of the few good qualities about my hair is that it holds color well. I have to be careful about highlights and their ingredients since I got some bad ones in Iowa in 2010 that made my hair fall out, and I'm still dealing with the fallout (get it?) from that ten years later. So maybe it's just the highlights lasting an extra-long time (I got them in October). I don't know. I just hope it doesn't mean that my hair is going to turn white soon. 😱

2. I've discovered a wonderful foundation that has been working really well on my skin this winter: Hourglass Immaculate Liquid Powder Foundation. I love the way it feels and looks and how it sinks right into my skin and blends right into my complexion, which isn't an easy feat for my super-fair skin. The only thing I would change about it would be to add in SPF. Regardless, I highly recommend this foundation to my fellow women. (Yeah, I know it's expensive--but as I said it works well!) 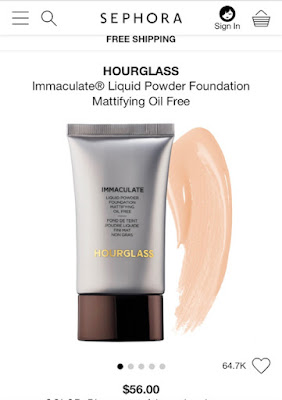 3. Super Tuesday gave some pretty super results! In my imaginary status as a Democrat I wasn't in it for Amy Klobuchar anymore since she dropped out a few days before. I didn't want Bernie to win big so I'm glad Biden made a comeback and that Bloomberg's ship sank. I bet Biden will be the nominee, and I'll make a second bet that Amy K. is a top contender for his VP (she's a woman from the Midwest, two good demographics to meet). Bernie is dangerous and I think his expensive, exploitative socialist ideas would be disastrous for America if they became reality. And I really have read about them and thought about them (and soundly rejected them). I always thought Joe Biden should have run in 2016. He probably would have beaten Trump. Now I think it's too late for him. There's the Ukraine scandal with his son and I worry about his age; he clearly seems to be having some issues with that. All I can say is that he won't be getting my vote. But Trump will, and barring a major disaster or scandal (not unheard of) I think he'll pretty easily beat Biden. 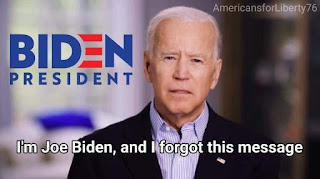 4. I read a really good article this week written by a woman who switched her party affiliation from Democrat to Independent. Her observations and thoughts about the two parties are refreshing. Finally, someone from "the outside" who recognizes that most of today's Republicans are good people, not bigoted, uneducated hillbillies who blindly love Trump no matter what (or uncaring selfish wealthy people), as so many people seem to think. No matter your political party (or lack thereof), I highly recommend giving her insightful article a read. 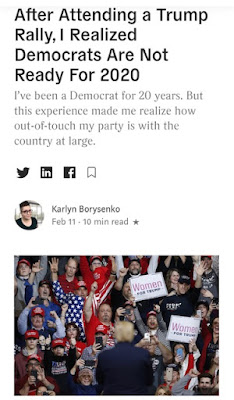 5. The coronavirus: my attitude is hope for the best, prepare for the worst. I've been into emergency preparation for years--I work on it almost every month--so I feel pretty prepared, and that's a good feeling to have when facing something potentially scary and unknown like this. I'm not skeptical about this virus, nor do I think the media is over-hyping it (too much). I believe it's going to get worse, I'm just not sure of the extent, particularly for where and how I live. I have theories about where it came from and why it's happening, but for now, I just wanted to impart the wisdom I just shared (ha ha), along with the recurring thought I've been having that "If ye are prepared, ye shall not fear," and this funny tweet, which is so true for me and other introverted homebodies everywhere. I have to admit that I really like the idea of being stuck at home with my family for a couple of weeks! (Famous last words? I hope not!) 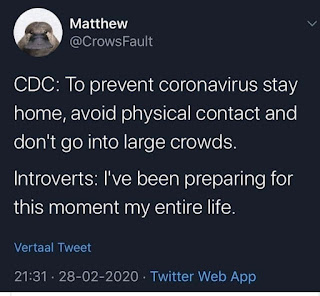