1. I have good news!! Well, I guess that depends on whether or not you like reading my blog, but since you're reading this I'm assuming you want to be here in my humble little corner of the internet. Get ready for a lot more of me because I've finally fixed the months-long problem I've been having of not being able to upload pictures to my blog! Yesterday I was exploring the useless Blogger help forums again, but this time I happened to find a comment embedded in someone's query that was the answer to my problem. You'd think Blogger/Google would make this information much more visible and available to its users without making them search with a fine-toothed comb for it, but I (slightly) digress. Basically, I figured out that I was out of storage space, so all I had to do was buy more. I don't like that I'm paying more money to Google, but my problem is fixed and I can once again post pictures to my heart's content. 💗

Now I need to figure out how to catch up on content. In the fall I'd made a plan to get all caught up by the end of this year. I'm now at least four months months behind on that. So I'm going to have to post the most important things and leave the rest to Shutterfly albums and memory. C'est la vie.

Victory is finally mine! (Please don't let those be famous last words! 🙏)

2. It's been an okay February:

The Patriots won the Superbowl. It's good to live in the land of champions once again.

There haven't been any big snowstorms, but here in Massachusetts it was the snowiest month of winter so far (which isn't saying much! Iowa meanwhile has been repeatedly inundated with snow and storms this winter.)

I went to the Cape for a weekend with my mom and we had a great time.

My grandma passed away on February 9th and I've been feeling sad about that. I miss her. It's so comforting to know that she's in a good place and I'll be with her again someday.

Peter and the boys went on vacation to the Poconos last week and I stayed home alone, which was enjoyable and allowed me to rest and recover from a cold I'd gotten. I had jury duty one of the days but it was cancelled so I didn't have to go. 🙌 It was a fun and relaxing week.

I got stuff done, like getting my project room unpacked, organized, and decorated, which was my big project (no pun intended) for January and February. Pictures to come in several months. 😁 (knock on wood)

I watched some good movies, including an excellent one from Hallmark (The Story of Us), and Peter and I FINALLY watched Lincoln, which we've been meaning to see for many years. Also, there was some good TV to be watched--the third season of Victoria hasn't disappointed, and the new season of When Calls the Heart just began (the first episode unexpectedly made me cry because I miss Jack!).

I read some good books. My favorites were two mystery thrillers, The Wife Between Us and An Unwanted Guest. They were what I like to call "un-putdownables."

And that was February!

John's 14th birthday! (I feel too young to have a kid that old!)

Clue Live (dinner theater at a mansion near Boston) with my mom, sisters, and niece

Seeing Alex Guerrero speak at John's EFY Youth Conference. He's Tom Brady's nutritionist/trainer/right-hand man and is a member of the Church who lives in our area.

The New England Family History Conference, which is held annually at my stake center and which I haven't been able to attend in about ten years.

A late winter snowstorm or two (or three).

Being able to do blog posts with my pictures again!

4. I've been taking a break from Facebook for ten days every month, and this month especially, it's been great. I feel more balanced, productive, focused, and peaceful without it. I also feel more disconnected from friends and family, which I don't like. I'm finding that it's good to regularly take a break and come back and take a break and so on. I don't want to cut social media out of my life, but I'm definitely experiencing the benefits of lessening its presence and influence. I won't be joining any other social media platforms, including Instagram (I'd been thinking of reactivating my account there, but I've decided that it's officially dead to me; Facebook is more than enough.).

5. I don't care about the Oscars, but LDS Living always does an article that has modest dresses that women wore at them. This one was my favorite:

So elegant and lovely! 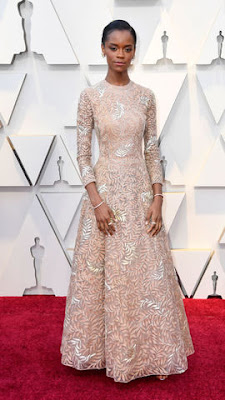 I liked Emma Stone's dress too. 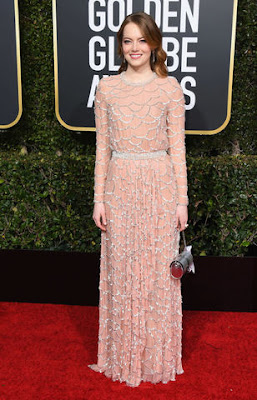