1. I'm back! Life is different! I live in a new place in a new house! Other than that, though, it's all the same.
Not really, but in the essentials, it is.
Things went pretty well with the move. We like the house and we like living in Massachusetts. That said, we miss Iowa. And it was a long summer. There's still a lot to do. Too much. Moving is such a pain. Daily I have to fight the urge to just be done with it all and spend the majority of my time reading books and watching movies. I wish!

2. The boys are doing well in school, which started about two weeks ago. They come home happy, or at least content, but Sam especially misses his friends and his old school. My heart aches for him because he and I are so much alike and I understand how he's feeling. But overall things are good, and hopefully more friends will be made in the months to come.

In talking to the boys, these are some comparisons so far of school in Massachusetts and school in Iowa:

The lunch food was better in Iowa and there was more time to eat it.

The bus drivers and bus rules are nicer and more fair in Iowa.

There wasn't as much homework in Iowa.

There was more recess in Iowa. Yo MA! (not to be confused with Yo-Yo Ma, ha ha)--haven't you seen the research that shows that playtime and fresh air are important in the development and learning abilities of children?
The academics are more serious in Massachusetts, but the teachers are just as nice as they were in Iowa.

There are more days off in Massachusetts, which the boys of course like. Me, not so much. They don't even have a full week of school until the last week of September! I prefer consistency over days off and/or early-release days nearly every week.

Our school district in Iowa started junior high and high-school later in the morning than elementary school, which makes a ton of sense--many studies have shown that teenagers do better when they don't have to get up so early (circadian rhythms and all). MA has yet to adopt this. I wish they would. The boys don't seem to mind, but I do. John needs more sleep than he's getting. And it's hard getting up at 6:00 every day. (I don't know what I'm going to do when seminary starts for John next year! The Church hasn't seemed to catch on yet either to the idea of teens starting later in the morning.)

Massachusetts, or at least our school district, doesn't have the programs that the boys had in Iowa that were so helpful for each of them (a special class for John to help him stay organized and on top of his schoolwork because of his ADD, and a gifted/talented program for Sam).

Sorry Massachusetts, but even with your highly rated schools, so far, Iowa is winning!

3. I went out to lunch this week with two new friends from my church ward. We ate at a historic old restaurant in Ashland (the next town over from mine) that I'd never eaten at but I'd passed it many times over the years and heard that it was haunted. Just my kind of place! A lady who worked there talked with us for a little while and said it's definitely haunted and told us some of her experiences there with that. It was so cool! And the food was good too, and so was the ambience. And of course and most importantly, it was fun to socialize with new friends. I was proud of myself for choosing not to be a homebody. (Another daily battle I face!)

4. We've had a rainy week. I've loved it, but unfortunately, part of our basement storage room has a big puddle in it now (did the home inspection miss that somehow?!). So that's going to be fun to deal with. Also, it's rained so much that the pool water is almost all the way up to the top. I haven't seen it that high before. Granted, we've only been here for two-and-a-half months. It would be kind of neat if the pool overflowed. (What am I saying!? Somewhere in me I must like creating more work for myself!)
Also, the fire alarm went off at 3:30 this morning and woke us all up and really kind of freaked me out. I have no idea why it went off like that, and then it did it again a few minutes later. It was so disconcerting. With Peter traveling every week, I'm on my own, and I can handle most things (I think), but the fire alarm going off in the middle of the night for no obvious reason, saying "Fire, fire"--that's a tough one. On the flip side, at least we know that our fire alarms work. The home inspection didn't miss that!

5. There's a good new three-part miniseries airing on PBS. It's called The Miniaturist. I haven't read the book yet, but it's been on my to-read list for years (along with so many other books...as I said before, sometimes, especially lately, I just want to read all day!). I watched the first episode last night and it was good...until the last part when a surprising twist happened that I really didn't like. Other than that rather large and disappointing fly in the soup, I enjoyed the history, mystery, and magic of the story. 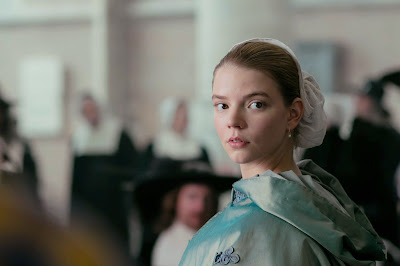 Our weekend plans include going to an annual arts festival in town that I used to go to as a teenager, and having a family birthday party for Sam. Next week I hope to start doing regular blog posts again. I have a goal to finish up the posts from last summer on the Cape by the end of this month, and then I'll only be about a year behind! Woo-hoo!