Do These Windows Look Clean to You? 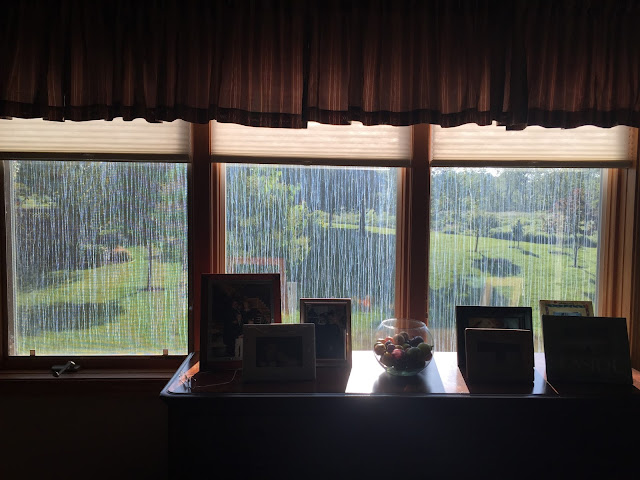 Every few years we get the house power-washed and the windows cleaned. In May I hired the same company that did it a few years ago because they did a great job when they were last here.
This time, however, the experience was pretty much the opposite of their last visit. I don't know if it was a group of new-hires or what, but they were here ALL DAY (whereas last time it only took a couple of hours), and they didn't even finish the job because they didn't have the correct ladder to wash one side of the house--the side you see in the picture above, with the super-streaked windows. This group of windows happens to be the ones we look out of the most since they're right off our kitchen and dining area. The guy said they'd come back another day and finish the job, but I didn't hear anything back for a few days, so I called the company. They said they'd look into it and get back to me, and then they didn't ever get back to me. Whaaat? Meanwhile, despite a number of rainfalls that I was hoping would wash the streaks away, this continued to be our view: 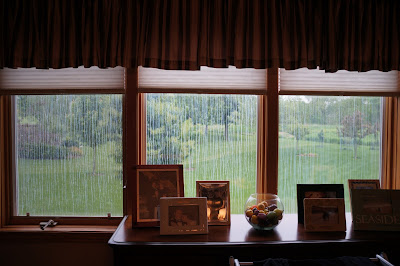 So a few weeks after they had come we got the bill, even though they hadn't ever returned to finish the job. I delegated the phone call this time to Peter because he's used to working with difficult companies. They said they'd come out and finish up. They didn't. Then I left for the summer. Apparently they came out while I was gone but again they didn't have the right ladder, or something like that. So I came home after seven weeks away to still-streaked windows and another bill from this company, with an added late fee. Peter called them again two weeks ago and they said they'd look into it. We still haven't heard back from them.

I don't have unreasonable expectations or demanding standards. There's nothing wrong with expecting a window-washing company to leave you with sparkling clean windows, or at least windows that were cleaner than they were before they came.

I refuse to pay this bill until the streaks on the windows are gone!
The way things have been going, I guess we better get used to the view. Oh wait, it's been over three months; we're pretty much used to it.
Sigh. :-/