The Best Babysitting Ever! and Other Good Things

One of our favorite things about our cruise on the Disney Fantasy was the Kids' Club. Officially it's called the Oceaneer Club, but we just called it the Kids' Club. This place was awesome. You could drop off your kids at any time for as long as you wanted at no cost, and they'd take good care of them for you. There were a lot of fun things to do there: great activities like crazy science experiments and fun crafts, dance parties, special character appearances, a lab with computer games (that was John's favorite), and really cute indoor playgrounds. John loved the Kids' Club and I think it was probably his favorite thing about the whole cruise. He'd beg us to drop him off there and to let him stay for hours. They even feed the kids lunch and dinner if they're there during mealtimes. It was really a fantastic place for kids (and for parents, because it gives them a break, not to mention free babysitting!).


John playing games with other kids and staff members. 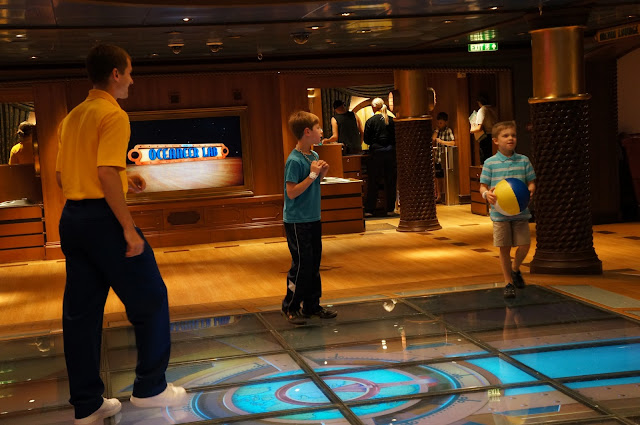 The Toy Story room was neat! If I were a kid I would have loved playing in there. 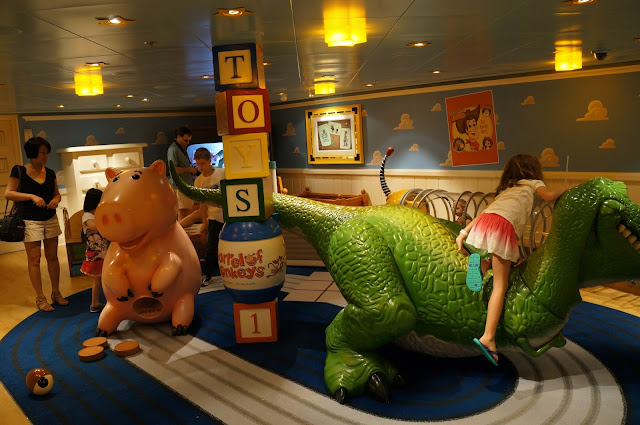 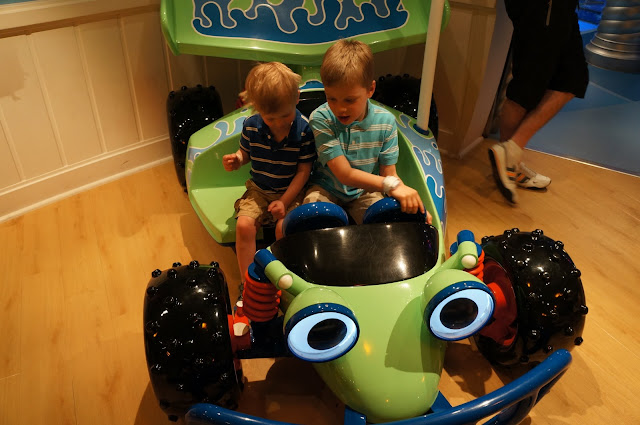 One of John's favorite characters when he was younger was Slink. He had a Slinky dog that he brought everywhere with him. Now he got to play in good old Slink... 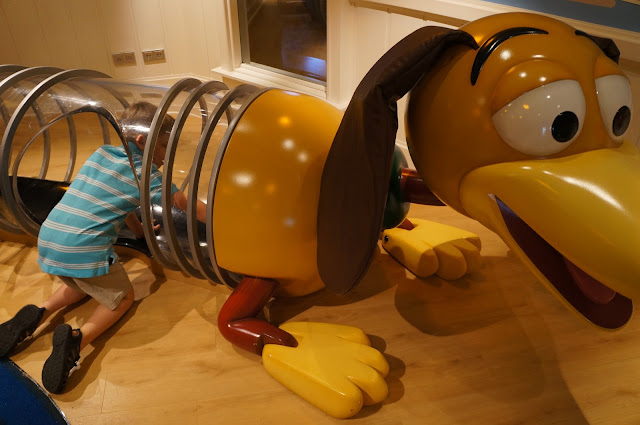 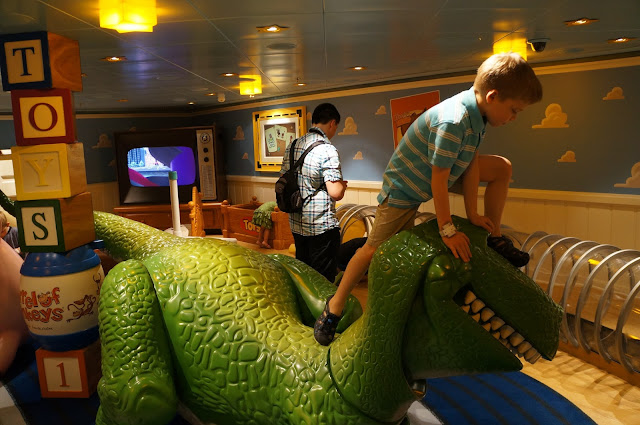 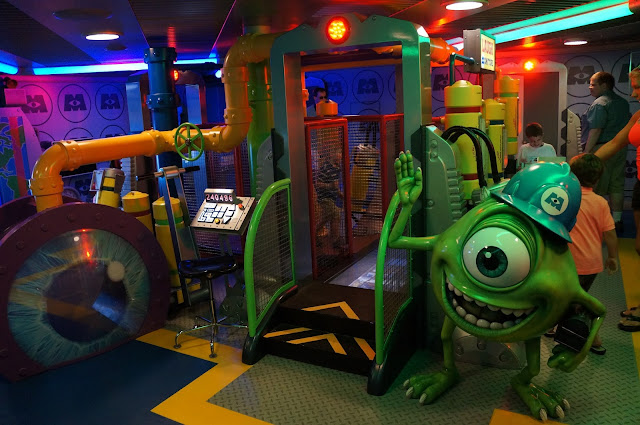 There was a lot more to the club than what these pictures show, but parents were only allowed inside to pick their kids up and when they had Open Houses at the beginning of the cruise, so I didn't take a lot of pictures of it. It really was a Kids' Club in every way! It was a wonderful place.

Another fun thing for the kids (and of course for grown-ups too) was the pool deck at the top of the ship. There were a number of pools up there, one that was for everyone, one that was just for little kids, and a few that were only for adults. There was a cute little children's area called Nemo's Reef that was a waterpark playground for young kids. There was also the AquaDuck water coaster that went around the perimeter of the ship and was really fun. We went down it with John a few times. My favorite thing about it were its unparalleled views of the ocean. I felt like the king (queen) of the world up there! 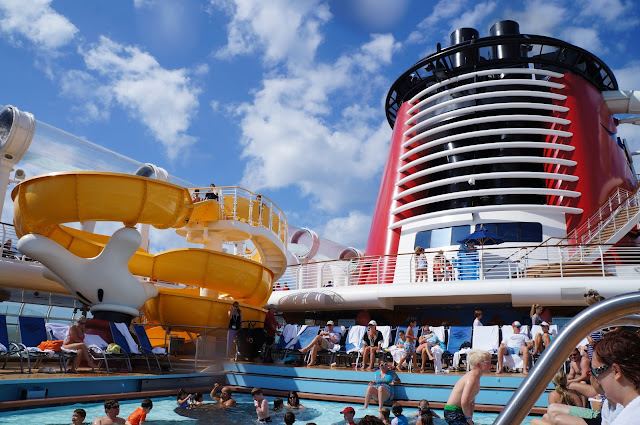 That's Peter and John going through the AquaDuck. 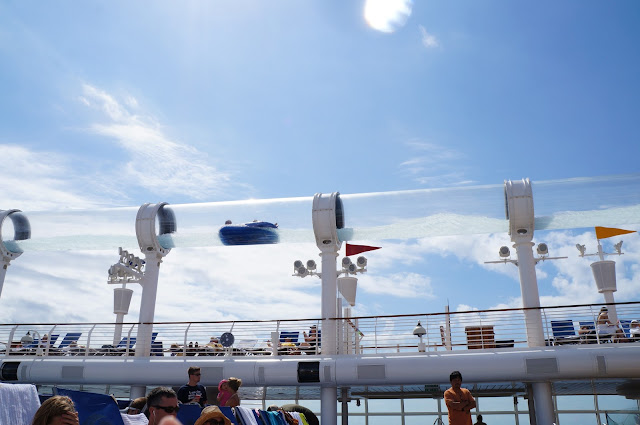 Sam wasn't crazy about going in the little kid pool until I got him a set of these fun toys to play with in there. (And they make great bath toys at home!) 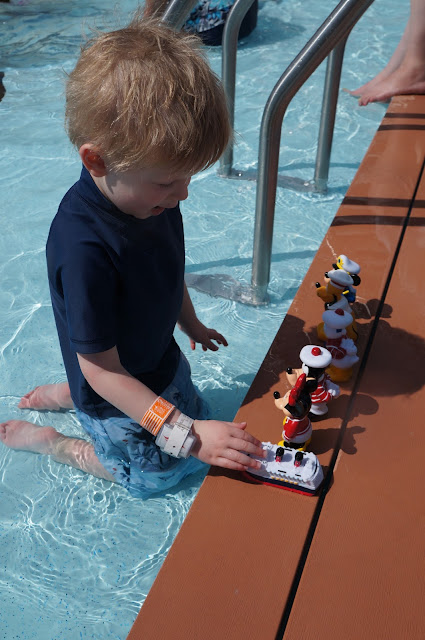 There was also a mini golf course at the top of ship that John and Peter did together. There were a lot of fun things that I didn't get pictures of. You'll have to go and see them for yourself. :-)

A few other random kid-centric shots:

You've gotta love Iago! Here he is at the "Arr-cade." 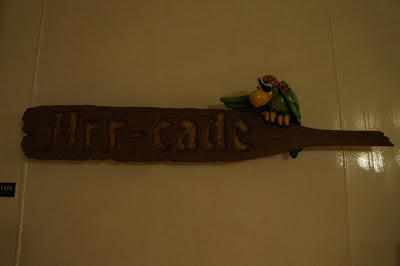 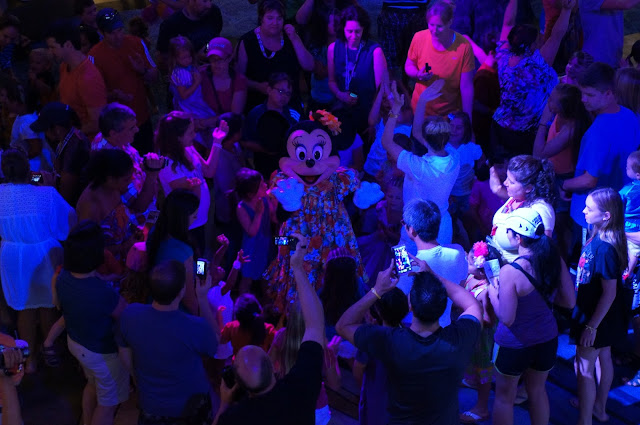 Here's Sam making himself at home. Going on a cruise is hard work! 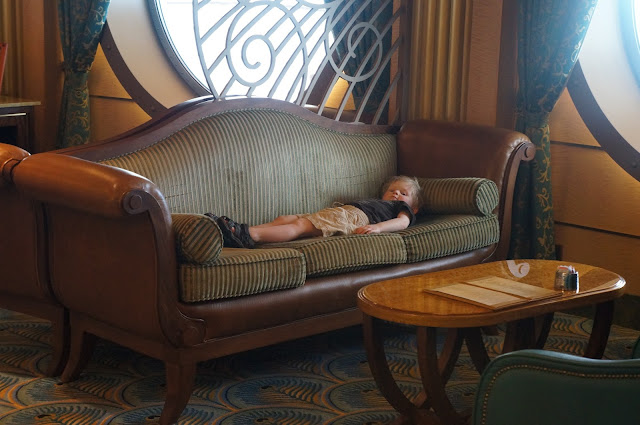 Next week I'll finish up my cruise-related posts before I take off for the summer!