I have ten things to write about today, including the weather, my health, politics, religion, entertainment, and other random assorted things for your reading pleasure.

1. I love cloudy rainy days, and unfortunately, Iowa hasn't had many in quite awhile. (Can you say major drought conditions??) But yesterday was overcast and there were even a few showers, and today it's cloudy again. I think an overcast sky is such a good backdrop for the beautiful fall foliage, which is near peak right now. It makes me feel happy; something about a cloudy day brings out the sunshine in me. Ironic, isn't it? I hope there are more days like that in store this month. With a lot of rain too--we need it!

2. This weekend it's General Conference, one of my favorite weekends of the year! We get the BYU Channel so we watch almost all of it at home on both Saturday and Sunday, which is easier with kids than taking them to the church to watch it. On Sunday I'll make a pot roast with potatoes and carrots in the Crock-Pot for dinner, which has become kind of a tradition for me to do on Conference weekend. I'm looking forward to the inspiration, guidance, and spiritual enlightenment that we'll get to experience this weekend! If you want information on how to watch (you can do it online), click on the picture below. It would be time well-spent, I promise! I think this Conference might get a lot more viewership and attention than usual from non-Mormons and the press; I call it the "Mitt Romney effect." 3. I'm pleased to announce that I now know and understand the difference between 401(k) plans and pension plans. (And just in case you're interested, my husband (the retirement expert) likes pension plans better than 401(k)s. He and his former boss developed a way to maximize Social Security benefits through pension plans and that's what they got a patent for.)

4. I turned off the comment verification on my blog yesterday because I dislike having to do comment verification when I comment on other people's blogs--Blogger has made it really hard. Sometimes I have to try at least four or five times to get my comment published! So now you don't have to do that if you want to leave a comment on here. It wasn't a good sign, though, that less than an hour after doing that, I got a Spam comment, and then another one later in the day, and another one today! Oh well, at least it only happens on old posts.

5. What did you think of the presidential debate Wednesday night? Did you watch it? I certainly did and I really enjoyed it! I thought it was well-run and that Jim Lehrer did a good job of moderating it and helping it to be a substantive debate. I truly learned more about both Romney's and Obama's economic plans and ideas. I thought it was very good, and of course I liked that Romney did so well. I thought he looked and sounded truly presidential and like a smart, knowledgeable, compassionate leader, definitely more than President Obama did. I'm looking forward to the rest of the debates! 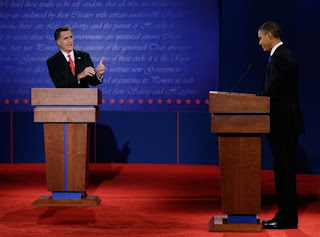 I thought it was great that when the debate ended, the Obamas and the Romneys mingled and were friendly with each other (even if some of them might have been sending angry thought missiles at one another as they did it. Ha ha!). In any case, I thought it was really nice and civilized. 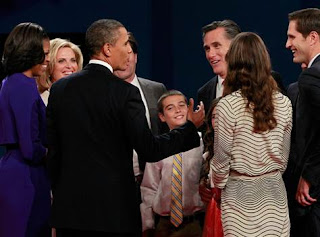 6. This week I got the FluMist vaccine. I liked it much better than getting a shot. However, my sore throat from being sick last week got worse and now I have a head cold, plus I've got this uncomfortable tight itchy feeling on my upper back and arms that I've never had before. What the...? Why can't I just be completely healthy?! I feel like I've had sick symptoms since mid-August when seasonal allergies hit me like a Mack truck. Anyway, if I end up getting the flu this winter than I'm going to go back to skipping flu shots/flu mists next year.

7. One of my favorite movies ever is Annie, the one from the early 1980s. I loved that movie as a child and I still love it today. It's the movie's 30th anniversary (meaning that it came out when I was only two years old!), and this is a fun article I read about little known details about Annie and the auditions for it and a Q&A with Aileen Quinn, the actress who played Annie. She was perfect for that role! Look at her now! You can't even see her cute freckles (they were real, by the way). 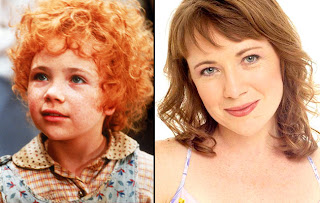 8. I'm really mad at my camera. It lost the pictures I took of John on his first day of school in August. The camera took them, but they didn't show up when I uploaded the pictures from the camera to the computer last week. I am ticked!! First day of school pictures are special and it's such a shame to lose them! I'm definitely getting a new camera this month. My Canon Digital Rebel and I will not be parting on the best of terms.

9. I had to unfollow someone's board on Pinterest because they were spilling all of the details on Season 3 of Downton Abbey, which was fun at first but gets to be irritating after awhile. I want there to be some surprise left when it airs in the U.S. in a few months. I love that show! Downton Abbey had this on their Facebook feed this week and I thought it was cute, and true. 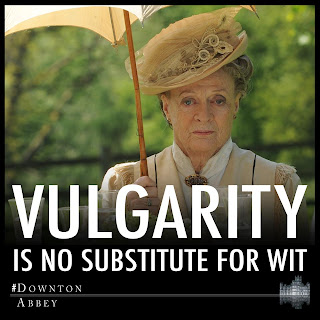 True wit isn't vulgar because it has no need of it. This is something that I think so many of today's screenwriters and comedians really just don't get.

10. When I went on to Facebook to copy the above picture, a friend had posted this and I thought it was so funny that I had to share it on here. I think the hair swap works a little better for Romney than it does for Obama. What do you think? 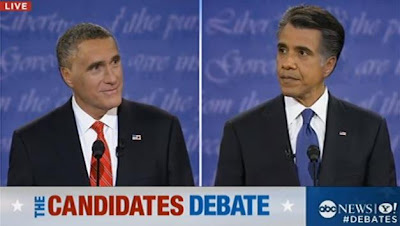 Have a great weekend! (If you watch General Conference it's guaranteed to be great!)