1. I was surprised and saddened to hear about Thomas Kinkade's death at the age of 54 last week. He's been my favorite artist for a long time. I think his pictures are absolutely beautiful and I found the Christian philosophies behind his work to be inspiring. He seemed devoted to his wife and daughters, and I'd always look for the "N" that he hid in his paintings for his wife's name. I had no idea that they had separated in the last few years, that he had been an alcoholic before and had relapsed again (he had been drinking heavily when he died), and that the criticism of his work hurt him deeply. I don't understand that criticism at all, by the way. Who cares if his art was mass-produced? It was beautiful and it spoke to my soul. Dang art critics! I'll take his work over some ugly modern painting any day. (Sorry if you like modern art!) I've had a Thomas Kinkade calendar almost every year for over a decade, we have one of his paintings hanging in our house, I own several books of his pictures, and I'm sad that he's not here anymore to create his beautiful art.

These are a few of my long-time Kinkade favorites: 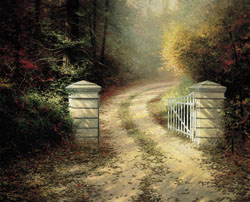 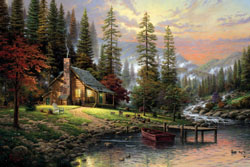 2. Now for some good news: we paid off our Toyota Highlander! Peter got it for me four summers ago as a (very big!) surprise for my birthday. I still love it, even more so now that we fully own it. Now we just have to pay off his Toyota Camry. As you can see, we like Toyotas.

If you want to see the post I wrote about my new Highlander in September 2008 along with pictures I took of it, click here.

3. I've been thinking for the past few months about jeans, specifically skinny jeans. I don't like trends too much, and I thought the skinny jean thing was a trend, but it seems that they're here to stay. I'm a long-time fan of bootcut jeans, but I was starting to feel unstylish when I wore them because it seemed like everyone had moved on to skinny jeans. So recently I went to Old Navy and got a few pairs of skinny jeans. And to my surprise, I really like them. They're tailored, not tight, and they're comfortable and flattering. I think they're cute and so I feel cute when I wear them. I'm not getting rid of my bootcuts though, because I still think they're classic.
I tried on a pair of jeggings too. Horrors! They were one of the worst things I've ever tried on and I took them off almost immediately. They were just awful. I will see them again in my nightmares.

4. Have you heard of Lauren Bush, niece of President George W. Bush and granddaughter of President George Bush? She's a model, and last fall she married one of fashion designer Ralph Lauren's sons. I didn't realize it when I first heard about it, but I saw her name somewhere this week and now I realize it: her married name is Lauren Lauren! For some reason that cracks me up. She goes by Lauren Bush-Lauren, which I think is smart. :-) 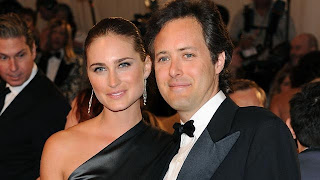 5. I'm done with my lipstick testing for Parents magazine, so now I can tell you which ones were my favorites. They were:
And the worst one was a Wet 'n Wild lipstick in a shade called "Pinkerbell," which was way too bright and matte and chalky feeling. I looked like a clown when I wore it!
I'm looking forward to seeing what Parents sends next. It's fun testing this stuff out (even if I did get a lip rash from it!). And it's nice that I don't have to buy lipstick again for awhile!

We're headed to Kansas City, Missouri for the weekend to go to a temple open house. Do you have any fun plans? Whatever they are, have a great weekend! 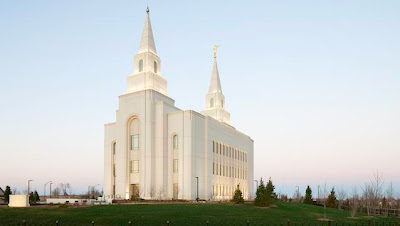