A few months ago I wrote about how I was pining for a new car, specifically an SUV or a crossover vehicle, and more specifically a Toyota Highlander. I'd had my Toyota Camry for five years, and it was a great car, but I really wanted more space and something more secure for our slippery, icy New England winters. Well, I somehow ended up getting what I wanted a lot sooner than I thought. Peter surprised me at the end of July for my birthday with a little black box that had a shiny silver Toyota keychain in it. That day he'd surreptitiously left work early and went to the dealership to negotiate the purchase of a brand-new silver 2008 Highlander. I couldn't believe it! This was the best luck that had befallen me in a very long time. 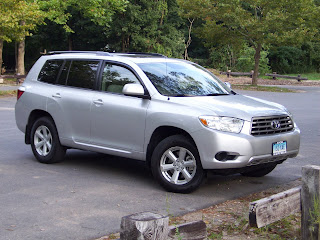 Now I've been driving the Highlander for over a month, and (surprise) I really, really love it. This is the first new car I've ever had, so I must say that I especially appreciate the new car smell. I quickly got over keeping it in pristine condition because the day that we picked it up was the day we left for our summer vacation, so the car got broken in pretty quickly. That took care of that! 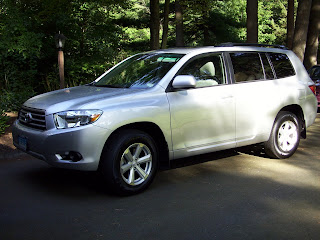 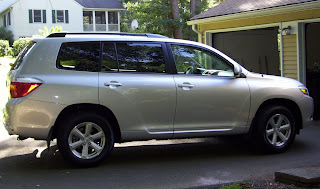 For those who are interested, I highly recommend the Toyota Highlander to anyone who's in the market for an SUV or other larger vehicle. I think the Highlander is technically a crossover vehicle because it gets better gas mileage than an SUV. It rides so smoothly and quietly, and you don't even realize how fast you're going because of that. Seriously, 80 feels like 60! Not that I ever go 80 or anything.

I also like the feeling of being up higher off the ground. I've noticed this car gets more respect than my humble little white Camry. Many drivers move out of the way much more quickly when I want to pass, which is awesome. (I promise not to turn into a tailgating bully. Well, unless the car in front of me is going really slow.) It's great to feel so safe when I drive, especially when John is in the car. Our insurance rate actually went down because of the numerous safety features of this car. And I'm not nearly as afraid to drive this winter because the vehicle is equipped with special stuff to deal with snow and ice.

John also approves of the Highlander, mainly because it's a big new toy for him to play in. He likes to play in all cars, and I think he was a little flabbergasted at how much extra space he now had to play in with this one.

I folded the third row down so that he could have more open space to play in. He loved it! 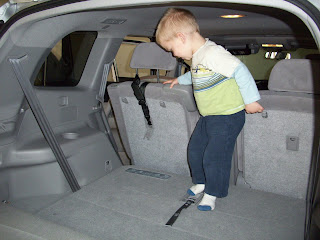 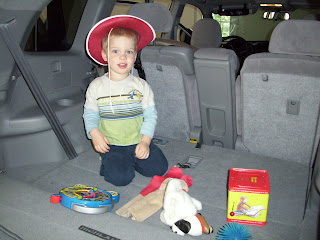 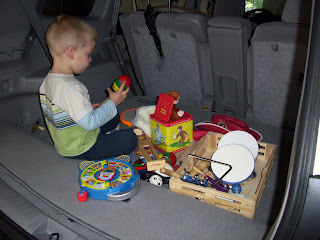