This Woman Scares Me

It's really not my style to poke fun at anyone but myself on my blog, but in the case of a certain politician's wife, I really and truly cannot help myself. I've been finding myself a little fascinated by Callista Gingrich, wife of Newt Gingrich, lately. At first it was because of her hair. I can't get over her hair. Does it ever move? How does she get that perfect wave on the side? How does it stay in place? Why does she dye it so unnaturally blond? In short, what's up with her hair?! 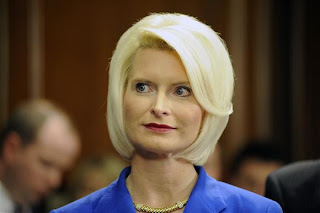 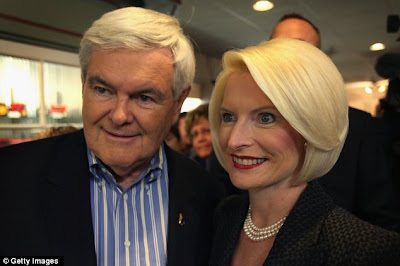 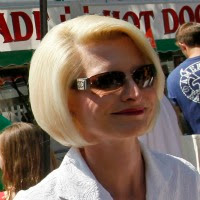 I couldn't decide if I liked it or hated it and finally went with the latter. It's just too fake-looking. (I think it's still overall probably better than my hair though...boo.) Then I realized that that's not all that's fake-looking. When I was searching on Google for pictures of Callista's hair, I noticed that she looks quite a bit different now than from how she used to look.

Doesn't her face look different now? I know it's a decade later, but my investigative instincts (and the eyes on my face) tell me that there is something else going on here. You hear about Botox and plastic surgery and all these anti-aging procedures and things, and I feel like I'm seeing that whenever I see her.

The following picture SERIOUSLY startled me when I saw it. I had to minimize it on my screen because it was giving me scary visions of her coming after me with a big shiny knife with this expression on her face.

She is an attractive woman, but the facial procedures and the fake hair make her less so. Artificial appearances make me wonder about how honest and true the person is on the inside. I think presidential candidate's wives should let their natural beauty shine through. It's a good reflection on the candidate and makes him seem more real, honest, and true. A fake-looking wife equals a possibly fake candidate both personally and professionally. That of course is debatable, but it's my hypothesis and it may very well be true in some cases...like this one. (I don't trust Newt Gingrich. Or Callista. I wasn't going to bring this up, but...as most people already know, she was his mistress first, and then he finally left his wife and married her. The adultery and the hypocrisy are big things that really bother me about them.)

To be fair, these pictures of her are better (even if her hair is still way too blond): 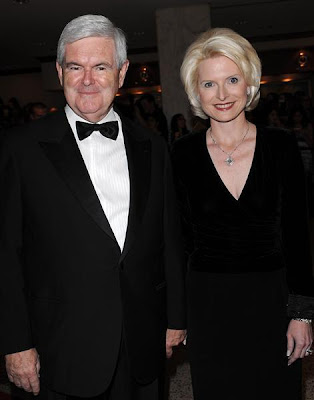 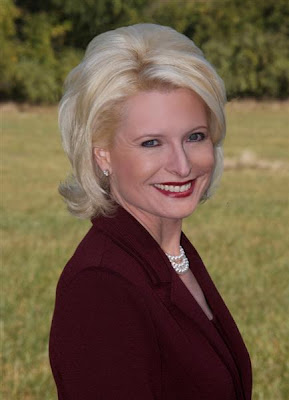 This woman, on the other hand, does not scare me at all, and this is what I mean by being true to yourself and your natural beauty. 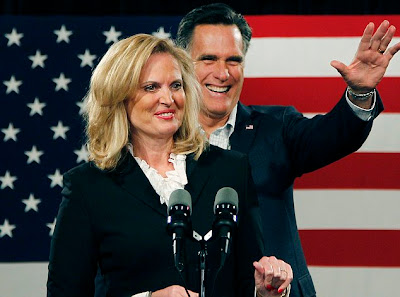 Ann Romney's hair color is much more natural looking (even if she does get it colored, which she probably does, but it's a nice, appropriate shade. Platinum blonde on women over a certain age just doesn't look right.). And her face looks normal and attractive and un-played-around-with.

One last thing. When I was doing "research" on Callista I came across some interesting articles about and pictures of the candidate's wives. This is Jon Huntsman's wife Mary Kaye and I love, love, love her dress and her whole outfit. This woman has some serious style, I'll say that for her (and him).

So there you have it. Me with my Ivy League degree in Political Science hard at work, evaluating candidates on the basis of their wives' appearances. But seriously, I do think the wives matter. And Callista Gingrich does scare me a little, and that picture of her is going to pop up in a nightmare at some point with her chasing after me with a steak knife. Maybe that's what I get!

P.S. Today are the New Hampshire primaries and I'm excited about it! Go Mitt!!
Posted by Donna at 9:00 AM