This Woman Really Annoys Me 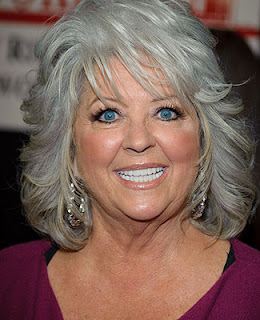 Last week I wrote about a woman who scares me; this week I'm writing about a woman who angers me. Today in the news I read that well-known chef Paula Deen has Type-2 diabetes. She has known this for three years, yet in that time she has continued to push her unhealthy, high-fat recipes on the public, things like deep-fried cheesecake, quiche that requires a pound of bacon, and the following doozy of a creation, a hamburger with glazed doughnut buns and topped with bacon and egg: 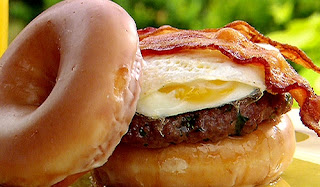 No wonder this woman is overweight and diabetic. You can't eat garbage food like this on a regular basis and be healthy. Maybe it's because I've been reading a book about nutrition and disease that stresses the importance of a whole foods, plant-based diet with many studies to back it up, but I've been finding myself frustrated by the irresponsible eating habits of so many Americans and the industries that support them (meat, dairy, drug companies, even certain aspects of the medical establishment). We could be so much healthier than we are and the rates of certain diseases could plummet if we'd only feed our bodies better foods consistently as a way of life.

Shame on Paula Deen for promoting these kinds of recipes to the public when she knew she had diabetes that was surely caused in part by this food that she eats. She has done her viewers a great disservice. Southern-style food is probably the most unhealthy type of food in the country; the high obesity rate there is proof of that. And now she is being paid by a foreign drug company to be a spokesperson for their diabetes drug. So she cooks, consumes, and promotes foods that very likely were a contributing factor to her diabetes, doesn't tell the public about her condition for three years, and then earns money for pushing a drug to help treat a disease that she likely caused with the food that made her rich, famous, overweight, and diabetic in the first place. I am disgusted by this woman's irresponsibility, her hypocrisy, her willful ignorance, her apparent greed, and her crappy idea of good food. 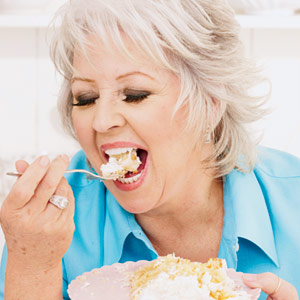 P.S. I first read about this today on msnbc.com, and I also got much of my information from this wsj.com article.