The Last Day of Kindergarten

I know everyone says it about their kids, but it really does seem like John's first day of kindergarten wasn't that long ago. In reality, it's been almost ten months, but it flew by fast. His last day of school was two weeks ago on June 2nd, so his time in that hallowed year of kindergarten has officially come to a close. (I'm so glad I have another child who has yet to enter kindergarten, otherwise I'd be beyond sentimental about this!)

And the end-of-year report is this: John had a great year! He adjusted nicely to being in school for a full day and also to living in a new state and going to a new school with nobody that he knew. He made many friends, had lots of fun, and learned many new things. His final progress report that he brought home on the last day of school states that he has been "promoted to next grade level." The first promotion of many in his life, I hope!

Just to mark his growth, this was John back in August on the first day of school before leaving for the bus stop: 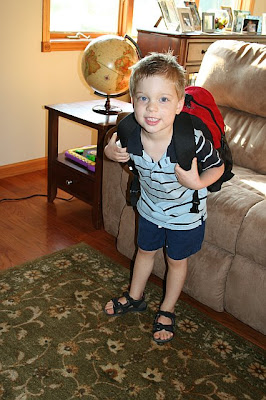 And here he is (in the same shirt!) on the last day of school before leaving to catch the bus. He's really grown up this year! And is becoming quite a handsome guy, if I do say so myself. :-) 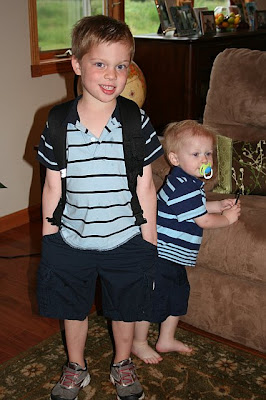 So long to my kindergartener and hello to my 1st grader!