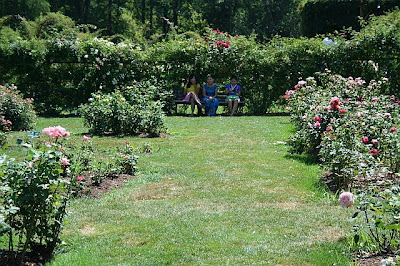 When I was at the Elizabeth Park rose garden in West Hartford a few weeks ago, something neat happened. I was pushing Sam along in his stroller and taking pictures of the scenery when three pretty teenaged Asian girls got up from a bench and asked me in broken English to take a picture. I assumed they meant to take a picture of them, so I was really surprised when I (finally) understood that they each wanted to take a picture with ME. What the...?

That had never happened to me before. I felt kind of flattered. It was nice to feel unique and to be chosen as the token American to have a picture taken with. Living in the U.S., it's easy to forget that we're different-looking, acting, sounding, and dressing to the majority of the people in the world. As normal as we might feel sometimes, we're always interesting to people somewhere else. And the reverse is true--people in other countries are fascinating to me, but they probably don't think they're all that interesting.

I asked one of the girls where they were from and she said "Thailand." They took close-up pictures of Sam and when one of the girls had her picture taken with me she held my hand. It was the sweetest thing. I'd been feeling a little sorry for myself that day, with a big move coming up and my husband and older son both out of town. But those girls really brightened my day and my perspective. I'll never forget them. And I'll follow their example when I travel the world someday by having my picture taken with the "locals" too.

He is pretty cute if I do say so myself. I'd want to take his picture too. (So I did!) 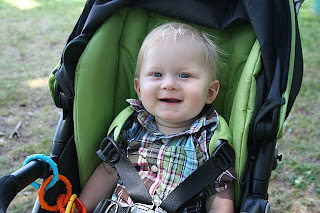