I'm back! I've been missing from the blogosphere since St. Patrick's Day, which was almost four months ago. That's the longest blog-break I've ever taken. It was an unfortunate necessity because life has been so busy, and doing the blog thing would have meant I'd have been neglecting my kids or my house or getting four hours of sleep a night or something. But I've missed writing blog posts and reading those of my friends. So I'm trying to ease back in, though life continues to be busy and will get even more so in the next few weeks when we move halfway across the country. I'm looking forward to getting settled into the comfortable routines of life again, hopefully by fall.

What have I been up to? Here's a quick (well, relatively quick) month-by-month summary:

-We listed our house for sale. And four months later...it's still on the market. Needless to say, this housing market isn't fun to sell in. It's been time-consuming to keep the house constantly clean and ready for people to come and look at it when I've had two kids and three pets to take care of and no husband to help (actually, the lack of husband makes it easier to keep the house clean in some ways. Ha ha.). So...anyone want to buy an almost 40-year-old 4-bedroom Dutch Colonial in the lovely woods of Connecticut? Please? 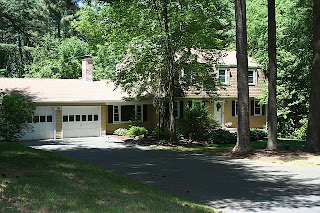 -Peter finished working at Prudential Financial, the company he'd worked for for all of his career, and started with his new company, Aegon (specifically Transamerica Capital Management), in Cedar Rapids, Iowa. He moved out to Iowa at the end of March and has been coming home on average about every two weeks for long weekends. So I've been a single parent a lot of the time. Good times! Fortunately he loves the new job. It's keeping him busy and challenged, which I guess are good things when it comes to one's career, right?

-We spent a week in Orlando, Florida. We went to Disneyworld, Animal Kingdom, and Hollywood Studios, and spent some days taking it easy at our resort, which had fun pools that John loved spending hours in. It was a great vacation. I'm sure we'll be back in the years to come! 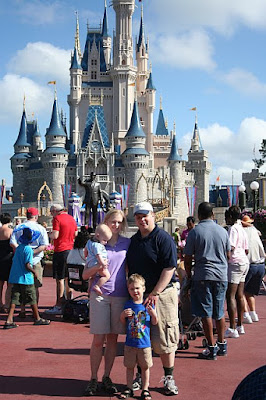 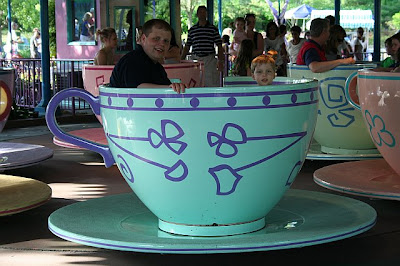 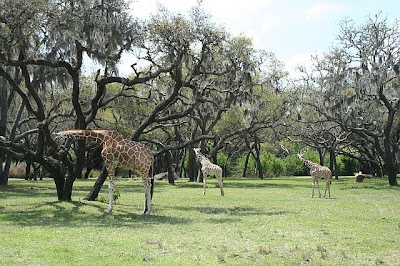 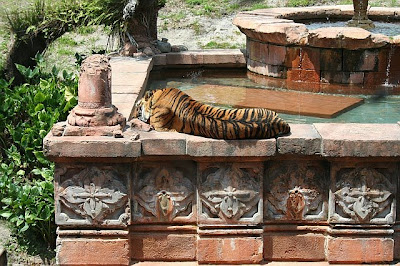 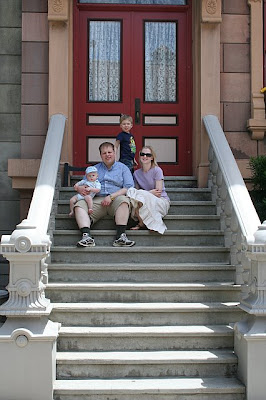 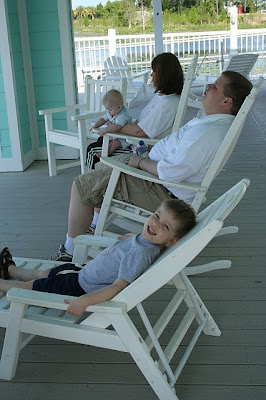 May
-I went to Iowa for a week of house-hunting. We looked at over 40 houses (and many more than that online), and we found "the one." One of the stipulations for us moving to Iowa was that I got to choose the house. Fortunately for Peter my favorite was his favorite too. We put an offer in at the end of the week and they accepted it with no counter offer. Selling a house stinks, but buying right now is great! I love this house, the neighborhood, the town, and the school John will go to. I'll post some pictures of the house and our new surroundings after we move in. 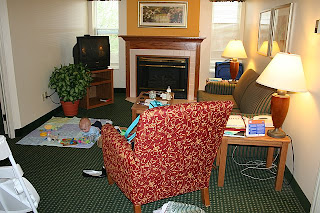 Although I don't really want to move away from New England, I'm kind of excited about moving to a new part of the country. I've had six months to get used to the idea. It will be fun to see what life is like there (as long as life is good!). And Iowa really is a beautiful place. The area we're moving to looks a lot like the Northeast, just with a wider, more open sky. We're going to live minutes away from the University of Iowa, which brings a lot of culture and opportunity to the surrounding area. It's not at all just cornfields and farms and a few corporations scattered here and there like my admittedly prejudiced mind had thought.
Also...just minutes away from our house is the second-largest mall in Iowa!! It has a movie theater, a children's museum, an ice-skating rink, a carousel and children's play area, lots of restaurants, Target, Barnes & Noble, and many more of my favorite stores! Peter may come to regret moving us to Iowa.
-I lost a dear friend. My loyal dog Christy was with me for literally half of my life. I first held her in the palm of my hand when she was only a few days old when I was a 14-year-old freshman in high-school. She died ten days away from her fifteenth birthday, peacefully and naturally at home with me sitting by her side. I loved her so much and I miss her so much and I think about her every day. I know she's happy and healthy again, running around in heaven having so much fun, and that we'll be together again. That makes all the difference in dealing with this painful but temporary loss. 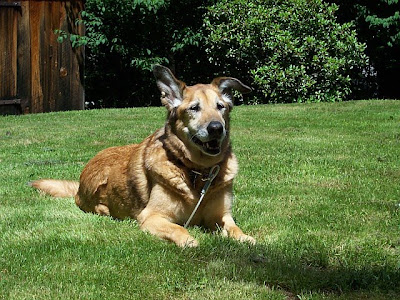 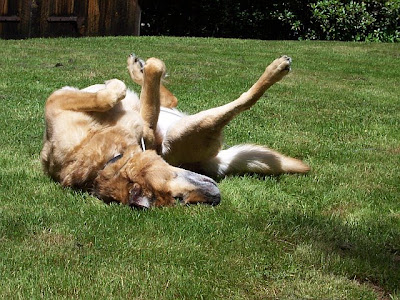 She loved rolling around in nice soft grass in the summer. Christy exemplified the concept of enjoying the simple pleasures of life.

-Also in May, John got chicken pox. Even though he'd been vaccinated. What's up with that?
-We brought our boys to Fenway Park for their first Boston Red Sox game. It was very fun, although John was more interested in his Spiderman balloon than the game. Sam was so good and charmed the sox off (ha ha) the people sitting behind us with his cuteness. 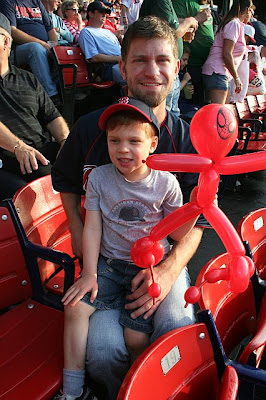 John and Uncle Nate (my brother) 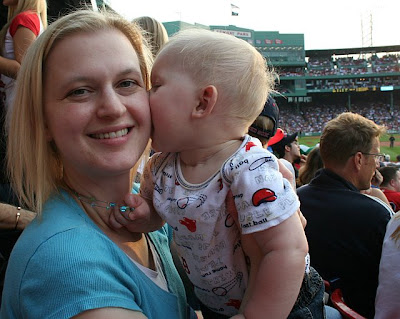 This baby has me totally whipped.
June
-My niece Hayley, one of my most favorite people ever, graduated from high-school. We were all so proud of her. Now she's off to college next month! 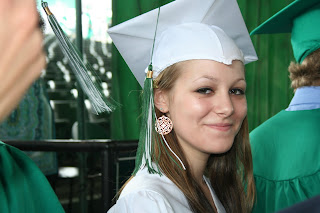 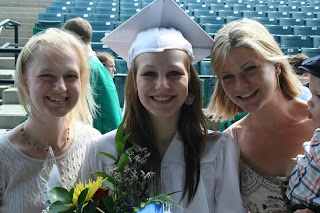 Me, Hayley, and my sister Elizabeth

-We vacationed for two weeks on Cape Cod. We went early this year because of the move. It was our sixth summer in a row going there and we'll continue to return each summer. The Cape is one of my most favorite places and someday I hope we'll own our own house there. As always, we had a wonderful time. 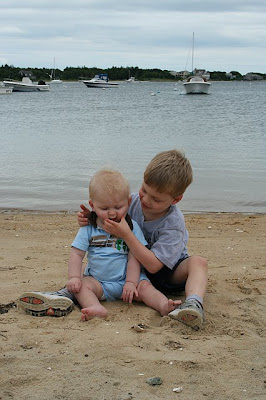 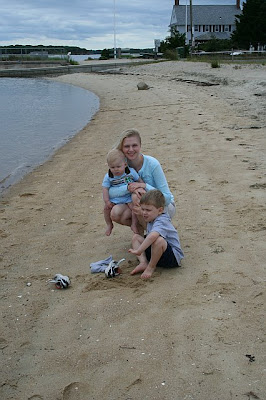 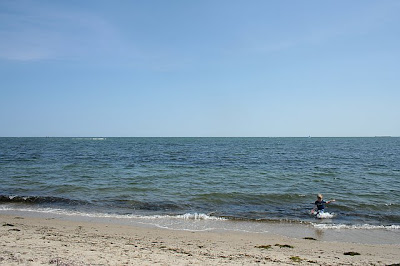 Can you see John? 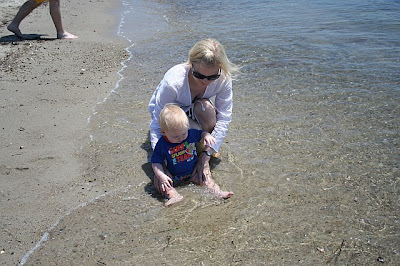 Sam's first time at the ocean
July
-My parents beat us to it and sold their house. This is the house that's been our family's home for the past seventeen years in my hometown of Hopkinton, Massachusetts. I'm sad that I won't be able to come back to it. Over 4th of July weekend, I bade it a fond farewell.
-Moving preparations have consumed most of my time this month. Movers are coming to pack us up for two days next week, load everything onto a truck the day after that, and then on the morning of July 22nd we're leaving Connecticut and driving out to Iowa. Still haven't quite wrapped my mind around that, but it's going to be happening in ten days.

So that's been my life for the past few months. House-selling, house-hunting, solo-parenting, vacations, good times, difficult times. I'd like to add blogging in again because I enjoy it as a creative outlet and it's a fun way to keep my writing and editing skills up. It will probably continue to be spotty over the summer as we pack up, move out, and get settled, but please stay with me as I become a midwestern New Englander!
Posted by Donna at 11:15 PM