-My blog friend Kerri makes and sells her own so-good-you-could-almost-eat-them homemade soaps and bath products, and she recently launched her Messes and Mudpies website for selling them. I can personally attest to the high quality of her products: in December I ordered some of her things, and they were all wonderful. They also arrived quickly and in perfect condition. I couldn't have been happier with the Warm Pumpkin Spice soap bar (which cleaned and gently exfoliated my skin and left the nicest light scent on it), the pretty cupcake bath bombs, and the two fun lizard and fish soaps that I got for John. I will definitely be a repeat customer, and I hope you'll check her site out. It's worth it!

-My sister Elizabeth had her first baby last Thursday, March 5th, and it made the news in Boston because she, the baby (Rocco Anthony), and the father (Justin) all were born on the 5th of March, and it's a pretty rare thing for mom, dad, and baby to have the same birthday. Rocco showed up a week early all on his own--what great timing! We've been surprised at just how much attention this has received: their story has been on three different Boston TV channels, aired nationally on the Fox News Channel last Saturday, there were two newspaper interviews, and even The Ellen DeGeneres Show, Oprah, and The Today Show have contacted them! Here are the links to two of the news stories: 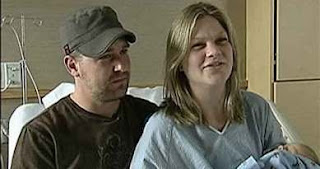 A picture of Justin, Elizabeth, and Rocco from the NBC interview.

-From a pleasant subject to an unpleasant one (sorry!), I've been really ticked off this week at HBO and the continuous crap that it spews out. They've totally crossed the line now with an episode of that horrible show Big Love that they plan to air soon. In it, they show the details of what happens in the Mormon temples. As a Mormon, I'm highly offended by this. What takes place in our temples is private, special, and very sacred, and they're taking that and using it as sensationalized entertainment. So I called HBO headquarters in New York City to leave a message letting them know how I feel and why I feel that way. If they hear from enough people, maybe there will be a chance (albeit small) that they won't air this especially offensive episode. What are these people thinking anyway? It seems that working for HBO has diminished or obliterated any moral compass they ever had.

-Speaking of TV, you've heard of the Nielsen TV ratings, right? They contacted me awhile ago to be part of their monitoring program, and I got the materials in the mail this week. Starting yesterday I have to keep a diary of whatever we watch on TV and then send it back to them after a week. In exchange they already sent me $30 in cash. Cool! I think it's a neat thing to be a part of. I've always been curious as to how exactly they come up with those ratings, and now I get to find out firsthand. (I bet you can guess which channel's shows won't be featured at all in my TV diary! Not that we even get HBO. Why pay for garbage? Sorry, just had to get in another dig. I'm done now!)
-I'm up in Massachusetts visiting my family for the next week and I may not be around in the blogosphere as much until the week after next. Originally for our spring vacation we were going to go on a Caribbean cruise. Then the economy tanked, so we thought about Disneyworld instead, and when the economy still didn't improve, we finally decided on my mother's house 90 minutes north of us in Mass., because it's FREE! : )